The problem with the euro ...

A significant analysis on what he calls the "Euromess" from Nobel Prize-winning economist Paul Krugman in today's New York Times. 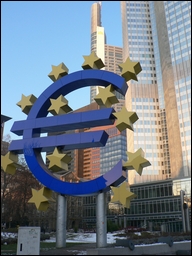 Eurosceptics on both sides of the Channel have long argued that the problem with the euro is that the eurozone is not what economists call an "optimal currency area" i.e the economic differences between member-states are too big for one currency and one interest rate to work. But these critics have tended to be on the Right. Now they have the support of America's leading left-wing economist.

"The real story behind the euromess," writes Professor Krugman "lies not in the profligacy of politicians but in the arrogance of elites -- specifically, the policy elites who pushed Europe into adopting a single currency well before the continent was ready for such an experiment."

Ouch! John Redwood could have written that. In fact, he almost certainly has.

"Long before the euro came into being," adds the Prof "economists warned that Europe wasn't ready for a single currency. But these warnings were ignored, and the crisis came."

He's right -- but it doesn't mean the eurozone is going to blow apart. The Euro-elites of which he writes have too much political capital invested in the euro to let it fall. But it is in trouble because economic conditions in Greece, Portugal, Spain, Ireland and even Italy are so different from France, Germany and the smaller north European democracies that having one currency and one interest rate for all really does cause pain for the weaker brothers and sisters.

Of course that pain could be alleviated if there was greater fiscal union -- if, as in America, the centre was able to pump out funds to member-states in trouble. But fiscal sovereignty is still a big deal in the eurozone, even among enthusiasts for European integration. Hence the current messy and ill-defined bail out for Greece (with perhaps others to follow).

"A breakup of the euro is very nearly unthinkable, as a sheer matter of practicality ... to make the euro work, Europe needs to move much further toward political union, so that European nations start to function more like American states.
"But that's not going to happen anytime soon. What we'll probably see over the next few years is a painful process of muddling through: bailouts accompanied by demands for savage austerity, all against a background of very high unemployment ...It's an ugly picture. But it's important to understand the nature of Europe's fatal flaw. Yes, some governments were irresponsible; but the fundamental problem was hubris, the arrogant belief that Europe could make a single currency work despite strong reasons to believe that it wasn't ready."

I'm Andrew Neil, presenter of live political programmes The Daily Politics and This Week. I'm also a publisher and business consultant. I'm blogging here about the politics, personalities and prospects around my BBC programmes.

You can stay up to date with Andrew Neil's blog via these feeds.