Behind The Scenes of The Bleak Old Shop Of Stuff

As announced this morning, production is underway of the new show 'The Bleak Old Shop Of Stuff', starring Robert Webb. We've already got some exclusive behind the scenes pictures and quotations from the producer, Gareth Edwards, and the writer, Mark Evans... as if you weren't already excited enough as it is. 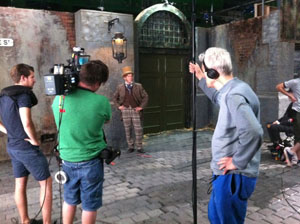 On the first day of filming, producer Gareth Edwards said "So here we are deep in the thick of Victorian London made out of plywood, complete with plastic railings and rubber cobblestones. Actors are going into wardrobe and make-up wearing jeans and trainers and emerging in crinolines, wigs and  top hats as if they were on a time-travelling conveyor belt. Urchins are scampering about. It's all very surreal. And there's some very impressive facial hair going on. It's all a little bit mad and properly exciting. "

The writer of the show, Mark Evans, has also shared his feeling about the start of production: "It turns out you sit eating cake and typing for a while and then people actually go and make the things you so glibly typed. I just wish that they'd picked up on a couple of typos. In particular, I was quite surprised to find Jedrington and family now live in a small, two-bedroomed mouse. But some on set rewrites and no-one will really notice. People have worked so hard and so brilliantly - everything looks amazing and properly Victorian. I felt an overwhelming urge to apologise to everyone 'sorry, this is my fault... sorry everyone...' but instead just said 'thank you' and then drank too much coffee and ate all the biscuits. I'm a writer; that's my job." 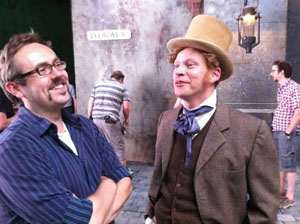 Writer, Mark Evans, and Robert Webb who plays Jedrington on the set of The Bleak Old Shop Of Stuff

We'll keep you posted on all the latest news from behind the scenes, so keep checking back!