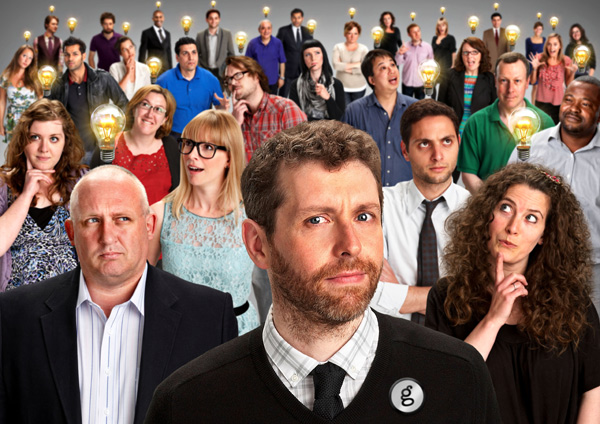 The amazing Dave Gorman is back with a brand new series of Genius and we've got a few exclusive web goodies for you. First off we have an introduction from Dave himself, there's a revealing behind the scenes video and best of all - an interactive series of videos on youtube called The Genius Generator.

Hello there. I'm very excited to say that Genius is coming back to BBC2. Sort of. I say sort of because it's not really the same show. This is Genius Mark II. It's bigger, sillier and - dare I say it - better.

In series one we used to have 4 or 5 punters on each show. With series two we've loosened things up. Each episode has a forum of 70 people who've all got ideas and can all get involved. It used to be that I knew every idea coming and we'd built a prop for all of them. That gave us some great moments but - and I'm being honest here - it also meant it could get a bit predictable at times.

So instead of filtering through every idea sent and choosing a handful in advance, this time we've packed the studio full of people who've got ideas. It means I don't always know what's coming up and nor do the guests. (Oh yeah... that's another change, this time we've got two guests each episode instead of one).

Genius Behind the Scenes video:

I've still got a couple of things up my sleeve in each show, but mostly it's a free for all. The guests can choose to run with an idea or dismiss it out of hand if they like because there's always another idea just around the corner.

And what a dazzling array of genius guests we have for series two. Russell Howard, Hazel Irvine, The Hairy Bikers, Jane Moore, Vanessa Feltz, Richard Herring, Chris Addison, Mel Giedroyc, Tim Minchin, Alexei Sayle, Shappi Khorsandi and Noddy Holder... to name just 12. or 13. There are tow Hairy Bikers after all. But they think with one mind. Anyway...that's all of them. (which is all of them).

We've made it much easier for people to get involved with the show too. As well as our website, bbc.co.uk/genius, there's a facebook group, www.facebook.com/bbcgenius and a twitter feed www.twitter.com/bbcgenius. All have been fantastic at getting people to submit more drawings, more videos and bringing more prototypes of their own to the recordings.

We've put some of the videos we received into a Genius Generator so you can have a play around and see some of the ideas generated by the very fertile brains of the Genius audience right now. There's also a little look behind the scenes for you to look at and there'll be loads more exclusive online content for you in the coming weeks, so do pop back and see what's going on.

Oh... and do tune in. If rational ideas like "The cat-shaped cat flap", "edible sticky tape" and "A wasp in every car to keep drivers alert" grab you then Genius is the show to watch. 10pm. Mondays. Starting September 27th. BBC2. Go on... it's Genius!