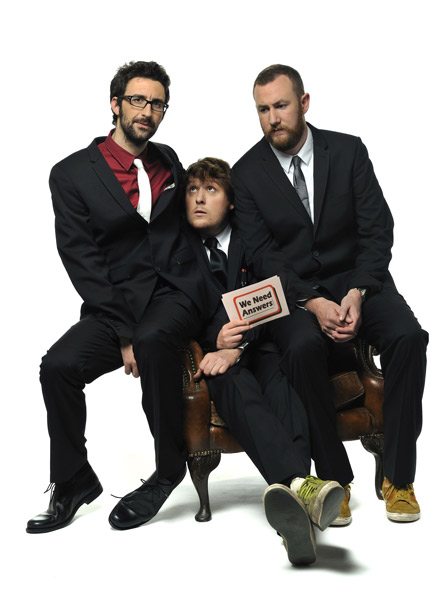 So here's the first No More Women, a series of videos we've made for BBC Comedy online alongside our new quiz show We Need Answers - which starts tomorrow on BBC Four by the way!

No More Women is a name game. The first player has to name a celebrity, e.g. 'John Prescott', then a category which they fall into and must subsequently be avoided - e.g. 'No More Politicians'. The opponent then names another celebrity who is not a Politician. As more and more categories are added it gets harder, and eventually impossible, to name anyone new.

But first, let me introduce the 'other two': Mark Watson (Host of the quiz and stand-up of some note, despite various physical shortcomings) and Tim Key (Question Master and ageing shambles) invented No More Women which I've gradually managed to worm my way into.

Being the least successful but most organised of the three of us, I can do things like writing this blog. On the TV show, I operate computers while the other two prance around like toddlers. But that's fine.

No More Women is an excellent game and one that deserves a prestigous setting; I filmed this first episode in a sort of picnic area of the BBC where you sometimes see celebrities (normally Stephen Merchant or some of the Strictly dancers smoking).

The game itself requires memory and invention (rather than ball skills, dice, luck or wrestling moves). It's fun to play and, maybe, entertaining to watch. Once you've seen one encounter you can certainly play it yourselves. Read on for the full rules. Mark and Tim even let me play it too on the odd occasion (usually when I'm driving them somewhere to attend something or other).

As you'll notice, Mark takes the game very seriously. Tim does too but he sometimes takes his eye off the ball and tries to make Mark laugh. Like I say, he's an ageing shambles. But sometimes his distracting tactics work and Mark falters. I guess it's a bit like snooker. Or chess. Or arguing.

Hopefully it'll end up with as much of a presence in everyday life in Britain as all of the above. It's better than the news, I think.

There'll be more No More Women next week.

Alex Horne is one of the presenters of We Need Answers, which starts tomorrow at 10pm on BBC Four. He is one of the tallest comedians on the circuit at 6'11" and his favourite trainers are yellow.

Rules of the Game

1. No More Women is, traditionally, a two player game.
2. A coin is tossed, and the winner decides which player begins.
3. The first player names a person - usually a well known person or celebrity - followed by a category into which that person fits. This category is then eliminated ie. no other person named in the game from this point can fit into this category.
For example. John Prescott, No More Policians.
4. The opponent must now name a person who does not fit into that category, followed by a category into which his new person does fit. This category is then eliminated, too.
5. The first player must then name another person, who fits into neither of these categories, followed by a new category into which this third person fits. This category is then eliminated.
6. The opponent must then name a fourth person, who fits into none of the eliminated categories, followed by a new category into which this fourth person fits.
7. The game continues in this fashion until a player makes a 'Challenge'.
8. A player makes a 'Challenge' if he believes his opponent has nominated a person who DOES fall into one of the categories which have been mentioned in that game, and therefore eliminated.
9. A challenge is made by saying 'Challenge' after a name and category is given.
10. If the player challenged concedes that the he did indeed name someone he shouldn't have, the game is over.

1. No More Women can be played by any number of people, playing in turn, if desired.
2. In this instance a player may only make a 'Challenge' on his turn.
3. One by one, players successfully challenged retire from the game leaving one eventual winner.

1. No More Women can also be played against the clock, if desired.
2. This usually involves each player being given five minutes with which to play; a period of time can be measured on a chess clock.
3. When the game starts, the opening player must press the button on their side of the clock. Their time will then start to tick down.
4. After naming a person and category, the button should be pressed again. His opponent's time will then start to tick down. This process is repeated until a correct challenge is made.
5. If no correct challenge is made in the time available, whoever uses up his five minutes first loses the game.
6. Gameplay is more stressful when against the clock.