Hello. It's my last chance to write one of these, so I'm really going to give it some.

In Episode Six, the threat of an Official School Reunion looms. Whether Gaynor attends or not, the fact that it's happening is enough to impact - it's one of those milestone, take-stock-of-your-life-type events. Like realising you no longer qualify for Club 18-30. 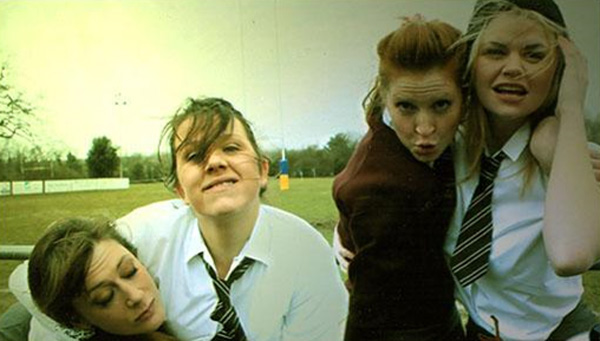 I've never been to a proper reunion and I'm not too sure I'd be very good at them. It'd be brilliant to catch up with the lovely people (of which there were many) and reminisce over stuff that no-one else would ever understand or really laugh at - unless they were very polite or hard of hearing and trying to cover it.

My worry is that I'd sense a creeping need to redress a couple of teenage comments that left my then-permed-head spinning with thoughts of "why didn't you just say (such and such) you knobhead". A while ago I met a woman by chance, who'd made me cry for weeks into my Forever Friends pillowcase. Instead of firing back the witty retorts I'd built up over a decade, I just panicked. My mouth made an involuntary fart noise and I enquired about her kids.

It's been a funny old time of late. People have said when your first project is shown it's like giving your baby away. I've not had a baby (nor given one away) so I can't rightly say, but I think (sticking with the emerging theme of this entry) it could be likened more to sending your child off on their first day of school.

I was worried it'd never fit in. It was the awkward sort, with duff clothes and a face that seemed to be begging for a kicking. Luckily, there were some really nice people at school who sat next to it at the lunch table. Thank you.

Now we're really at the end of the process. It felt like the end when we finished filming but then we had the edit. After the edit, it was the wait for it to be shown. Now it really is finished. To mark the occasion I got the large Salt 'n' Shake Crisps cardboard box that's accompanied me on all my house moves since the late nineties and packed everything away.

It's had a variety of contents over the years and has been labelled 'bedding', 'kitchen bits' and 'food to use quick' (those were dark days). I crossed out 'boho knitwear' and wrote 'Home Time'. I packed away script drafts, sketches, a series of rude doodles from the crew, rough cut DVDs, my kangol hat and the piece of paper that said 'Gaynor' from my caravan door.  Maybe one day I'll have awkward, duffly-clad grandkids to show it to. Not the doodles though, they really are foul.

If you've watched and liked the series, thank you ever so much - it means an awful lot.

Watch the last episode of this series of Home Time tonight at 9.30pm on BBC Two and catch-up with previous episodes on iPlayer.
Share this page