Come fly with me. Drone filming for beginners.

The first thing you notice when you encounter a drone close up is that the real world is getting more like video games. You operate a drone with what looks like a video game controller and it responds as instantly and effortlessly as if it was flying across one of those brightly coloured animated landscapes with little creatures firing rockets at it.

And because a drone is held in an exact spot by some kind of GPS system, when it’s not whizzing and skidding around at high speed it just sits in mid-air, eerily static and not like anything else you’re likely to see forty feet above a big tree. 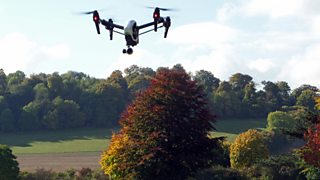 We were in a field outside a conference centre in Buckinghamshire: half a dozen BBC factual programme-makers who’d signed up to be taught about drones so they could use them for filming.

Our two instructors are usually hired to film things using drones. But today they were letting us get our hands on the controls – although, sensibly, they had a dual-control system, just like driving instructors, so that if we were about to fly the drone into a tree or to hit the ground or ourselves, they could take over and avert disaster. 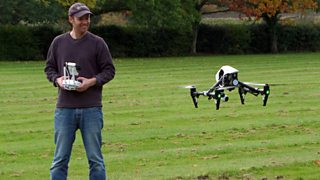 Filming with a drone is usually a two-person job anyway: there’s a drone pilot and a separate camera operator. They stand next to each other, each with their own console and they have different responsibilities. The pilot flies the drone on a course that has been agreed with the film director and the camera operator, and must make sure it does what it’s supposed to do without accidents. The camera operator looks at a little screen and moves the camera – up or down and left or right.

When we tried out as camera operators, I found it was best to ignore the drone itself and concentrate hard on the screen. If you start thinking what the drone is actually doing - where it’s facing and whether it’s rising or falling - your simple choices between tilting and panning turn into mind-boggling, three-dimensional puzzles. 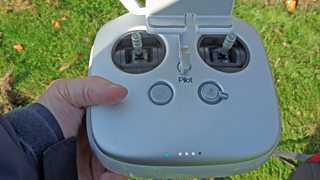 Most of my group, to their surprise, thought piloting was actually easier than camera operating. There’s still plenty to think about: how much throttle to give it, whether you want to rotate (both using the left joystick), whether to fly forward or backward, and left or right (right joystick) – or combinations of the above.

But, just like learning to drive, I had the feeling that with a bit of practice, the hands would soon know what to do without the brain having to work so hard. 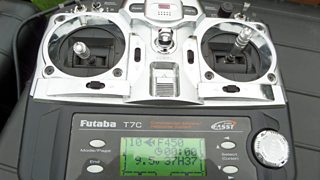 So after our training were we ready to take our first solo flights and start bringing spectacular aerial sequences to our films? No way. This is just the beginning of a process that will lead, one day, to some producers being allowed to fly unsupervised.

In fact, some of us hadn’t read the small print when we signed up. Our day’s training was described as an “assessment” – and that’s just what it was. We were being tested for suitability to be fully trained as drone pilots and camera operators. Each part of the day consisted of being shown or told something and then being tested on it. It was all done in the gentlest, least threatening way, but as one of my colleagues said in the cab from High Wycombe, if this was X Factor, we were still at the first audition in the hotel and nowhere near meeting Simon Cowell.

Alongside the fun stuff – flying the drones in the field – there was some theory. We studied aviation maps, trying to work out the meaning of strange symbols and flight restriction areas. And we had a quick course on meteorology, followed by a test asking tricky questions, such as ‘if there’s an area of low pressure north of Scotland, which direction will the wind be blowing in East Anglia?’

Fortunately, we weren’t humiliated by having our answers marked on the spot. But I left convinced of the value of drone filming, and marvelling at the uncanny steadiness and quality of the shots. They’d be an asset to almost any film. The sky is really no longer the limit.

Drone's eye view, with the author operating the camera

Six months on, what’s the verdict on TV news coverage of the election?