is professor of journalism at City University, London

Suzanne Franks has spent several years researching the reporting of the Ethiopian famine of 1984, looking at how the media coverage became a turning point in the relationship between journalism and aid. She has just published Reporting Disasters. Famine, Aid, Politics and the Media, an account of her findings. 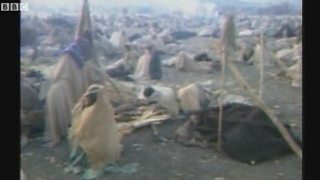 Next year is the 30th anniversary of the famous BBC report from Ethiopia (above) in which Michael Buerk talked about a “biblical famine”. The images of Mohammed Amin, together with Buerk’s powerful words, produced one of the most famous television reports of the late 20th Century.

In an era before satellite, social media and YouTube, the BBC report went viral - being transmitted by more than 400 television stations worldwide. It became the focus of a whole new style of celebrity fundraising which in turn produced a television event, Live Aid, which was itself a transforming moment in modern media history.

Far-away crises and wars are very often constructed by the media. All kinds of terrible things happen but many of them are ignored except by those in the immediate vicinity and we never hear of them. The long-term crisis in northern Uganda caused by Joseph Kony and the Lord’s Resistance Army caused havoc for millions of people, but it rarely registered on the consciousness of the world until some years after the worst was over. It was only then that the Kony2012 viral sensation brought any attention to the suffering in this part of the world.

The serendipity of news means that some stories resonate while on another day they would be ignored. For a number of years the atrocities in Darfur became a headline news story partly due to the efforts of George Cloony and others. Yet the crisis was just as serious in the preceding period, and indeed today there is still fighting and displacement in Darfur but it no longer makes the mainstream news. 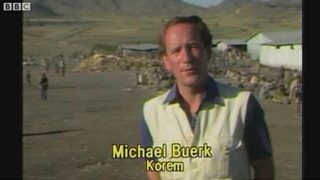 In the reporting of humanitarian crises, many disasters fail to make the news, but Buerk’s 1984 report from Ethiopia broke all records. The evidence I found through Freedom of Information requests demonstrates that the UK government was well aware there had been a famine in northern Ethiopia since 1982 but chose not to do anything about it. It was only when the media ‘broke’ the story that the government sprang into action, made statements in Parliament and agreed to send airlifts of food and support other high-profile measures.

Essentially the government was responding to its own public opinion, trying to be seen to help because the story, thanks to Buerk and then Bob Geldof, became a huge domestic issue.

As a result of this attention there was a whole new direction to public philanthropy in Western countries. Instead of charitable giving being seen as worthy and a little dull, it became hip and cool. When Tony Blair launched the Commission for Africa in 2004 he explicitly spoke of the way that his generation had been affected by the Ethiopian famine coverage and Live Aid.

Africa’s representation  in the media became a contentious area of debate for many years after 1984, and continues to be problematic. There is plenty of criticism both of negative images of Africa and the fact that so much of the continent is invisible to Western media.

The most deadly war since 1945 took place in Africa in the late 1990s and still continues today in the Congo, but it has rarely been covered. We only hear about humanitarian crises in Africa when they are interpreted by a celebrity visitor. Still today, the nexus of politics, media and aid are influenced by the famine coverage of 30 years ago.