Nepal earthquake: Why truth was a casualty in rush to formulaic coverage

is editor of the Nepali Times @kundadixit 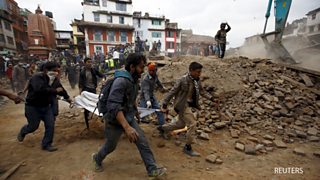 It is perhaps only when they become a part of the story they are reporting that journalists realise just what a narrow segment of reality they depict in the coverage of a crisis.

This is especially true when foreign correspondents report on a disaster like the earthquake that hit Nepal a month ago this week.

For the first seven days, as videos and photographs of a devastated city were broadcast around the world on TV and the internet, my family got frantic calls from friends and relatives. They seemed surprised that we were still alive, that our house was intact, we had food and water, or that they could even make that phone call.

Like everyone else, they had seen images of Kathmandu Valley’s historic monuments reduced to rubble, piles of bricks where people’s homes used to be, and photographs taken from rescue helicopters of destroyed villages clinging precariously to steep mountainsides. These apocalyptic scenes had convinced them that nothing was left.

Yet 80% of the houses in Kathmandu Valley were intact. Even in the historic heart of the city, the main temples and palaces were still there. The only thing different in most neighbourhoods after the earthquake was that there weren’t the usual traffic jams.

In fact the first foreign correspondents to parachute in the next morning were surprised on the drive into the city that they didn’t spot a single ruined building. Had they flown into the wrong hotspot by mistake?

Many of us in the media are accused of distortion by being selective in what we choose to report. Some foreign correspondents are careful not to fall into that trap - trying instead to break away from stereotypical coverage and catch a deeper understanding of what’s really happening beneath the surface, or away from the spotlight. Still, there is a formula for news and it’s hard to file a story that doesn’t fit it.

Which is why from Haiti to Haiyan, from Nargis to Nepal, it is, quite literally, the same old story. 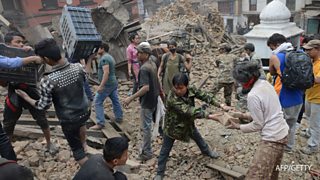 The international media arrives in herds and hunts in packs. Everything has to conform to a preordained script: you parachute in and immediately find good visuals of ‘utter devastation’; recruit an English-speaking local who doesn’t need subtitling; trail the rescue teams with sniffer dogs you flew in with as they pull someone out alive, after 12 hours (the rescuers need their logos on TV as much as you need them in the picture).

Then it’s back to the hotel bar to swap stories of derring-do, before calling the desk to plan tomorrow’s story of slow government response, and the day after tomorrow’s account of yet another survivor pulled out alive. After that, get a ride in a rescue helicopter for the out-of-town visual of utter devastation in a remote mountain village.

To my knowledge no foreign correspondent went around shooting streets in which all the buildings were still standing. They didn’t have time to look at farmers harvesting potatoes by the roadside as they rushed to pan across more historic ruins. Few ever reported that only 14 of Nepal’s 75 districts were affected. Kathmandu-based diplomats, when they flew over the epicentre in Gorkha district this week, were surprised to see much less damage than they had expected.

No-one found it extraordinary or newsworthy that the phones were working, that they could tweet even from the hinterland, or that Kathmandu got back electricity in three days. Such bits of information didn’t fit the script.

TV crews from the BBC, al-Jazeera and others had pitched their tents (all with their own Honda generators) next to each other in Kathmandu’s Darbar Square (pictured above), to frame the ruins of the old Malla palace as the backdrop to invited talking heads. No wonder TV news programmes are called ‘shows’.

One interviewee was asked if he could dim the lights for a Skype interview to make it look like things were really dark in post-earthquake Kathmandu. A scheduled live stand-up with a local journalist by CNN’s Anderson Cooper was cancelled at 4am local time because, well, they were rioting in Baltimore.

Needless to say, this kind of disaster reporting comes with predictable problems. Firstly, it distorts the scale of the destruction, either exaggerating the damage or not highlighting the areas where things are much worse. It focuses on the city, where people have better access to relief and information, and takes the story on a tangent away from the real needs on the ground.

Because competing TV channels are in the same helicopter, there is a temptation to over-dramatise, embellish and overstate. And countries like Nepal better have their disasters on a slow news day in North America - otherwise they might not make the bulletins.

But in Kathmandu this month it was the arrival of Indian TV journalists that exposed the worst shortcomings of the international media. It was as if the reporters were selected for their archetypal crudeness and rudeness, and ability to be insensitive to survivors. Nepali villagers who had just lost relatives were treated like hard-of-hearing hillbillies who should have been thankful to be on camera.

Had Indian reporters known they had to prove to Nepalis they were not the bullying ‘big brother’ - and that they were already being criticised for taking free rides on helicopters meant for rescue and relief - they would probably have been more careful.

Not surprisingly #IndianMediaGoHome started trending on Twitter and the transgressions of a few tactless journalists tainted the rest of the Indian media. Surprisingly, the most biting criticism came from India’s own public sphere, with many criticising the country’s TV coverage of the Kashmir floods last year as equally crass and overbearing. 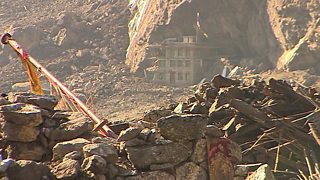 Soon it was time to leave and travel to another disaster zone. Many international reporters had left by the time the aftershock hit on 12 May, destroying homes already weakened by the main quake.

Three districts that had escaped relatively unscathed the first time were badly hit. But the foreign correspondents who’d remained in Nepal had by then got to know the terrain and their coverage was more comprehensive.

However, even though reports were coming in of horrific damage in Dolakha district, the disaster was becoming yesterday’s news. Although many correspondents tried to get more minutes on air, the media had moved on to the UK elections, Syria, Yemen and Iraq.

The media distorts reality by disproportionate coverage. Facts do not add up to the truth when we are selective in choosing what to report. Facts, in fact, can lie. Similarly, when the scale of the disaster is too big to comprehend the screen is just not wide enough to show the immensity of an avalanche that obliterates a village of 500 inhabitants.

Words are not enough, visuals are inadequate to show what happened to the village of Langtang (above) on 25 April, or to the settlement of Singati during the 12 May aftershock.

The challenge now is to keep the spotlight on Nepal when another disaster strikes. Not another earthquake, but when the monsoon rains in July-August trigger landslides on mountains destabilised by the tremors.

Villages need to be relocated; shelter and livelihoods provided for at least three million people in the danger zone. Relief supplies still haven’t reached the remote valleys. There are 25,000 schools destroyed - 1.7 million children are affected. Health posts and hospitals are barely coping with the wounded. The task of reconstruction is beyond comprehension: 600,000 homes were destroyed.

But the media pack has left, and with it the headlines that keep the crisis alive. Already, donations for relief and rehabilitation have started tapering off.

Nepal: Why are some disasters bigger stories than others

Reporting Nepal: One man, his mobile kit and the battle to connect

Reporting Nepal: In the end, events were all that mattered

Turning experts into journalists: Two years of The Conversation