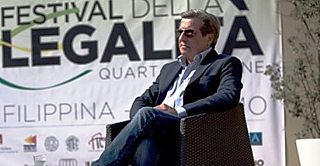 Franco Castaldo (above) remembers the time when people used to buy his newspaper at the kiosk, hiding it inside their coat or in the pages of other publications. Their wish to be informed was tempered by fear of the consequences.

It was 2004 and he’d just started publishing Grandangolo di Agrigento - a bimonthly newspaper with stories on the local mafia in a city on the southern coast of Sicily, where the risk of exposing the truth could be severe for reporters and their supporters.

After decades running the newsdesk of La Sicilia, one of the island’s main daily newspapers, Castaldo was suddenly removed from his position, transferred to another province and then paid for not working. His crime was having reported the accusation, by a supergrass during a trial, that an important local entrepreneur was connected to the mafia.

When the article came out, La Sicilia’s publisher - a former vice-president of the ANSA News Agency now under investigation for his own mafia ties - took action against the journalist.

Castaldo didn’t give up and founded a newspaper with the goal of reporting free of political and mafia control. With a team of five other writers and a network of contributors, he continues to expose wrongdoings and document his patch.

“Reporting about the mafia while living here isn’t easy,” he says. “You know all the people you write about, and you meet them at the bar, on the streets.

“But the number of people who pay a euro to read our paper has grown, and they don’t hide themselves anymore. They want to know, and this is a positive thing.”

Despite intimidation, the publication has become weekly and launched a website (below). 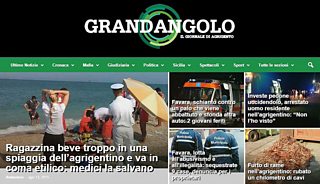 A recent 80-page report by the parliamentary anti-mafia committee - the first of its kind - denounces publishers and editors for accommodating or even colluding with mafias in exchange for power or other gains. Despite this, those journalists who are fighting tooth and nail to inform their communities are resisting.

The battle against censorship - and his personal experience of being targeted by it - was the reason 29-year-old Claudio Cordova created il Dispaccio di Reggio in 2012, an online newspaper that covers organised crime in the Calabria region, the ‘Ndrangheta. With a team of 10 contributors, all under 35, he publishes about 100 news items a day as well as long-form investigations.

Cordova is just one of the Italian journalists who have been the subject of more than 2,000 ‘acts of hostility’ committed by the mafia between 2006 and 2014. After he reported a legal dispute between a prosecutor and a Carabinieri officer earlier this year, the prosecutor demanded half a million euros in compensation for alleged reputational damage – a move Cordova interpreted as intimidation.

These days the criminals are more likely to use legal than physical threats to intimidate journalists, he says. “In the past mafia figures used to kill reporters instead. But that just created icons, attracting more media attention. That’s not what they want any more.”

The work of il Dispaccio combines traditional investigative journalism techniques with new technology. The website currently counts 18,000 unique visitors per day, and is funded by a selected range of sponsorships and, from last month, by readers’ donations.

Cordova has set up a system of subscriptions through social media and a daily press release with a selection of the best stories via WhatsApp. “We are receiving a large number of small payments. People want us to remain independent,” he says.

Organised crime strategies have changed over time. Unsurprisingly, mafia men no longer wear the Hollywood-style Sicilian coppola: they’re more likely to be educated at the best UK and US universities and occupy key positions, influencing political and business decisions at a national and international level. But vested interests and a lack of resources for journalism in Italy - except for the work of select reporters - mean the country’s media have scarcely been able to track and analyse this metamorphosis.

Now organised crime, especially that committed by mafias, is becoming international. And, despite their low budgets, new independent media players are contributing to and collaborating on local/national or local/international investigations.

Grandangolo d’Agrigento took part in a cross-border mafia investigation in Germany. Another collaboration between two centres for investigative reporting in Germany and Italy saw il Dispaccio reveal a local angle to the ‘Wolves of Europe’ saga - about forged financial bonds worth billions of euros harming the world economy and causing the collapse of entire companies.

But investigations in Italy go beyond the mafia. Corruption and financial scandals span the entire peninsula, as many journalists have revealed. 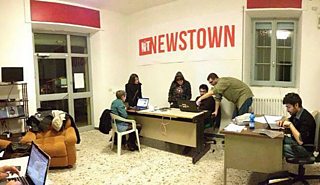 In the city of l’Aquila, destroyed by an earthquake in 2009, Newstown (above) is a project born out of the disaster that went online in March 2013. Mattia Fonzi, 31, is one of the four full-time editors and reporters who have been covering the scandals surrounding the local reconstruction process - stories not on the radar of traditional media. The website also has a political section and other news about the city. “Local politicians were not used to being confronted by journalists,” Fonzi explains. “With our questions, we’ve broken down a long-accepted mechanism of silence. Now we have our sights on the entire region of the Abruzzo.”

These newsrooms are changing the way in-depth reporting is done at a local level, partnering other media organisations in Italy and abroad. With a newsroom structure that is more flexible than that of most traditional operations, reporters are not reliant on the support of the Italian state that is in any case often unable to protect them.

The response so far from the readers confirms a new appetite to understand their cities and communities, without the filters and interference that are distancing the audience from mainstream media.

Alessia Cerantola is a reporter at IRPI (Investigative Reporting Project Italy), with a special interest in Japan.

Our other blogs by Alessia Cerantola

Stand out from the crowd with clarity, excellence and great human stories