Can journalists afford to ignore religion? Depends what you believe 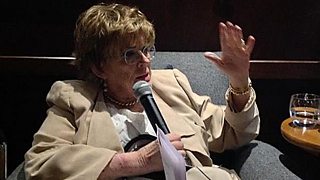 Well, yes, but from then on the panel at Wednesday night’s Media Society/Sandford St Martin Trust debate about journalists and religion largely parted company.

Hosted by the Groucho Club in London’s Soho and titled Damned if You Don’t? Why Journalists Can’t Afford to Ignore Religion, this was a packed and pretty feisty affair with an enticing line-up.

For Ann Leslie (pictured above), a failure by journalists (and governments come to that) to grasp the “centrality” of religion to millions of people’s lives had led to serious misrepresentation of world-shaking events like ‘the Arab Spring’. “We have an allergy to religion in this country… and we misreport,” she said.

That had happened first in Tunisia, where the catalyst to ‘the Arab Spring’ had been viewed by the press as religiously motivated when it had really been a protest against corruption - and then again in coverage of the aftermath of the Egyptian uprising when the UK media had been blind-sided, she said, by the election of the Muslim Brotherhood.

Speaking specifically about Islam in the region, she argued: “We have constantly ignored how important religion is to a lot of ordinary people. When they believe that corruption is such that they’ll never get justice, they turn to a fundamental and purer god.”

Myriam Francois-Cerrah’s pitch also called for more clarity: it was as important to recognise what isn’t about religion as what is. And in the Arab world, for instance, where there were many socio-economic motivating factors, religion was often “by the by”, she said, or else used as “a rallying cry for people power”.

There was a tendency for journalists to look at religion “through a reductive lens”, resulting in some “facile explanations… that avoid picking apart the roots of conflicts”.

Suicide bombing was a case in point, the New Statesman columnist argued: wrongly conflated in the media with religion when it was more likely to be about territorial protest.

She was critical of a “binary” focus that over-simplified a lot of reporting. It was simplistic, she said, to represent the Charlie Hebdo attack as either just about religion or just an assault on free speech - tantamount to saying 9/11 was an attack on US banking, ignoring the much wider context.

And she took issue with what she saw as an outbreak of media breast-beating about young people running away to join Islamic State: “When we discuss theology we miss more substantive points. What [persuades] young people to join IS? What about gangs? What about cults?” There was an assumption there about “Islamic exceptionalism”, she believed, and that was “problematic”.

UK broadcast journalism is “not fit for purpose”

A direct quote from a passionate Roger Bolton who hit out at the “inadequacy” of  “a liberal, secular, metropolitan group” of journalists who “don’t understand what motivates great sections of the population”. The unnamed broadcaster who described FGM as “a Muslim practice” was especially shaming, he said.

Understanding the role of Christianity in the history and culture of Britain was critical to understanding the country we live in, and so explaining some of that, with authority, should be “at the heart of what we do” as journalists, Bolton argued. Separating religion from politics and history was “ridiculous”.

He saw the main broadcasters as “under-powered”, taking aim at BBC News for not having an editor for religion who could be its centre of expertise, comparable to the BBC editors for science, arts, politics, sport and more. “We can’t do our jobs unless we tool up,” he said.

And he warned that lack of understanding about religion would lead to loss of credibility in other reporting: “You know when you read a news story on something you know about and you think, hold on [that’s not right]… If we can’t be bothered to find out what a significant section of the population believe, why should they take us seriously on other issues?”

But other things are more relevant to people’s lives

A quick about-turn from Steve Barnett. He certainly wasn’t against greater understanding of anything, including religion - “it’s knowledge”. But journalism was “a zero sum game” and news organisations could only prioritise a certain amount of specialist roles. Besides, the University of Westminster professor had other ideas.

A dearth of constitutional correspondents was “more dangerous than not understanding religion”, he ventured. And what about a journalism specialism in drugs.

It was a question of relevance in an increasingly secular society, he felt: “More focus on religion would displace stories with more relevance to most lives [in the UK].”

The rise of IS and the rise in anti-Semitism were “huge questions” globally that called for some religious knowledge on the part of journalists, he conceded. But they were ultimately “political” stories, in the way that the Troubles in Northern Ireland had been about politics and oppression more than Catholics and Protestants, he told his very engaged audience.

Damned if you don’t? Not quite the Barnett formula.

Our guide to world religions

Election terminology explained, because we don’t all speak ‘Westminster’

Election live two-ways: How far should journalists interpret the politics?