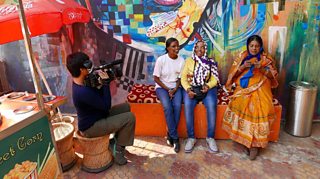 Filming at the Sheroes café in Agra, India

It was a rainy October afternoon and an email from BBC management popped into my inbox. It was about something called the Digital Storytelling Fund, set up only last year by the World Service to “encourage the production of cutting edge, in-depth digital content for a global audience”. In essence, it was a competition and the message was this: come up with a really good idea and we’ll pay for it.

Getting money to go anywhere overseas in the cash-strapped BBC is tough at the moment. It’s even tougher if you’re not a household name. Refreshingly, this fund didn’t seem so bothered about who you were, just whether you had a really interesting story. I decided to spend a Friday afternoon Googling stories and scanning blogs about international development. I saw an item about a café in the Indian city of Agra which helps acid attack survivors get their self-esteem back. The women there had been through unimaginable horror but seemed happy to talk to the media. What’s more, they each had their own story to tell. One woman was attacked by a stepmother, another by a rejected suitor, another by a husband who’d wanted a male heir. 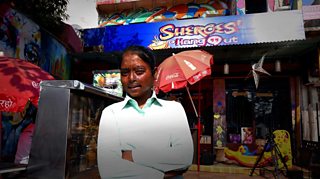 Dolly outside the café

BBC Online sometimes uses the Shorthand format – an immersive, picture-rich way of telling stories. It appeals to me because it’s long-form journalism and it’s also visually arresting. It occurred to me it would work well to tell one or two of the women’s stories and then look more widely at the global problem of acid attacks. I was called in to see Giles Wilson and Stephen Mulvey, editors on the BBC News website, to pitch the idea face-to-face. I pointed out that the BBC has often covered acid attacks but never really looked in-depth at why and where in the world they happen. We also talked about some of the sensitivities of the piece. The women would obviously be badly scarred. How would we avoid the piece appearing voyeuristic? Would colour or black and white be better for our stills?

Before long I was given the green light to start planning my trip. At this point my line manager, Daniel Fisher, suggested that if I was joined on my trip by one of the BBC’s top producers, perhaps I could do an accompanying TV piece too? He suggested Mark Georgiou who has been to many more war zones and far-flung places than I ever will go to. His experience was crucial.

When we arrived in India we met up with Neha Sharma, a talented, young camerawoman from the BBC’s Delhi bureau. We also hired a local stills camerawoman separately. The online article was, after all the main focus of the trip and Paul Kerley, who produces the shorthand format for the BBC, warned me against just taking “grabs” from video. Luckily, it turned out my producer Mark is a very good amateur photographer too, so we would have lots of stills to choose from – both landscape and portrait. 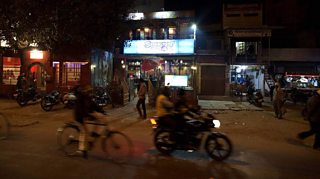 The biggest problem with a project like this is that you are trying to produce a story for three different platforms, all to a very high standard. Often on assignment, you might write your online piece in a hurry at the airport before going home, almost as an afterthought. This time I knew I would be required to write 3,000 to 5,000 words of well crafted text. The filming would also require a lot of patience and time – especially if it was to stand any chance of getting onto the main News at Ten.

Together our team worked out methodically what we needed over two days at the café, using every minute. In an odd moment, when I wasn’t interviewing one of the women, I’d perhaps do a radio stand up. Mark might snap a few stills. Neha would get the cutaways we’d need for our TV interviews.

On top of everything, we were all conscious that we needed to handle the interviewees sensitively. Thankfully we had hired a very good fixer and translator, Aarushi Ahluwalia, who invested a lot of time in reassuring the women and explaining what we were doing.

When we got back the UK, I spent three days writing my online piece, then another two revising the text with Stephen Mulvey. The TV edit was two more days on top of that. We were really delighted when the editor of the Ten, Paul Royall, watched the final piece and was adamant he would run it. Meanwhile, our online producer Paul Kerley worked his way through the best stills and James Reevell cut the embedded videos. Gradually it all came together to this. 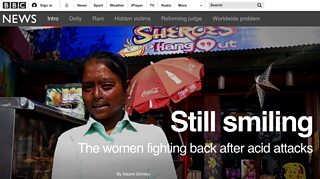 I have spent over two months working on this project. It’s good that the BBC still lets a journalist like me devote that much time to a single subject. I find it extremely rewarding when you can really submerge yourself in an important issue that you know will have an impact on the audience. There’s already talk of a follow-up piece after we had a very big reaction on social media to the story. Above all, I hope we have helped to highlight the courage of a group of inspirational women who refuse to let their lives be destroyed by this horrible crime.

Filming the prosecutors up close: A clear case of trust