Is Top Gear really 'the only programme on BBC television that doesn't believe in anthropogenic global warming'?

According to James Delingpole over at the Spectator, Top Gear is 'the only programme on BBC television that doesn't believe in anthropogenic global warming.' 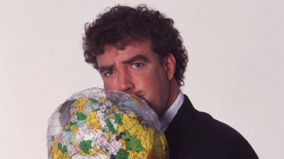 Now, we're all familiar with Top Gear presenter Jeremy Clarkson's penchant for hippy baiting, but is this latest claim true? Not in the slightest, according to Clarkson himself.

Clarkson, as any avid Times reader will know, does believe that burning fossil fuels warms the world. It's just that he doesn't see the need to freak out about it.

'Global warming's coming', wrote Clarkson in 2007, 'so you can don your King Canute hat and stand on the beach waving your Toyota Prius at the advancing heatwave, but it won't make a ha'p'orth of difference.'

'Unless we stop thinking of ways to prevent global warming', Clarkson argues, 'and start to address the problems it will cause when it gets here, our children are going to finish their days in an overcrowded, superheated vision of hell.'