Ashes to ashes, dust to dust: theory that Atlantic Ocean is warming due to climate change laid to rest

The North Atlantic is hotting up fast but it's not because of climate change, say scientists in the most recent edition of the journal Science. No, it's because there's less dust around to keep the water cool.

Over the past 30 years, the North Atlantic has been warming up at a rate of a quarter of a degree Celsius per decade. (That's pretty fast for a tropical ocean basin, apparently.)

Like the left-handed man in a Sherlock Holmes novel who limps, smokes Indian cigars and carries a blunt pen-knife in his pocket, suspicion immediately fell upon climate change. But the real culprit, it now emerges, is a drop in the amount of dust and sulphate in the skies above the Atlantic. 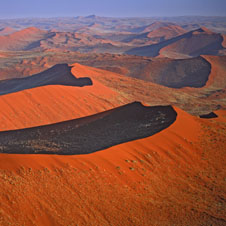 Dust blown out of West Africa (the world's largest 'dust superstore') and volcano-belched sulphate, both of which cool the atmosphere by scattering sunlight, are on the decline, say the scientists, which is why the ocean is warming.

Of course, climate change could still get the last laugh, according to the study, a joint project between the US National Oceanic and Atmospheric Administration and the University of Wisconsin.

In fact, the report concludes that rising CO2 concentrations could change wind patterns and reduce sand erosion through 'fertilisation' of desert vegetation, thereby driving the temperature of the Atlantic up by another 0.4° Celsius by 2050. Not cool.