Giant trees decline in Yosemite: climate change may, or equally may not be to blame

A new study has concluded that very large, old trees in California's Yosemite National Park are declining in numbers in all types of forest by an average of 24%. This is alarming news if you consider that this is one of the most environmentally protected areas in the world, let alone the US.

Climate change is clearly in the frame: '.. it is quite a surprise that recent conditions are such that these long-term survivors have been affected ... we certainly think that climate is an important driver,' said one of the study's authors, James Lutz of the University of Washington: 'The decline in large-diameter trees could accelerate as climate in California becomes warmer by mid-century.' 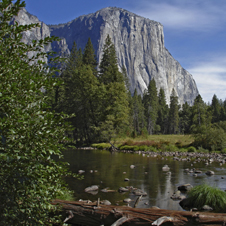 That's one possible conclusion, yes, but scientifically-speaking there's nothing in the research that would lead you to stress climate over other possible causes. (Note: this link takes you to a .pdf presentation of the findings, rather than the scientific paper itself.)

Lutz, his Washington colleague Jerry Franklin and Jan van Wagtendonk of the Yosemite Field Station of the US Geological Survey drew their conclusions from a comparison of two Yosemite tree surveys; one conducted from 1932 - 1936 and the other from 1988 to 1999.

The two surveys used different methodologies. The Wieslander survey of the 1930s was seven years shorter than the 'modern' survey, but looked at nearly 10,000 more trees. The Weislander also took in many more locations across a much wider distribution, covering very large areas where the modern surveyors feared to tread. Arguably, we're not really comparing like with like.

So what other factors should we be looking at? Higher climatic temperatures can decrease the amount of water available to very large trees, but an over-abundance of smaller trees, shrubs and undergrowth does this much more effectively.

The modern practice of suppressing wildfires prevents the 'clearing out' that would naturally occur in dense forest and stops larger trees, which generally survive these infernos, from gaining a competitive advantage. The Lutz et al presentation says as much in its 'take home points'.

That isn't to say that climate isn't a factor, but we should at least look at some dead trees and conduct a study into a) whether or not there is water scarcity at Yosemite; and b) what's causing it before jumping to any conclusions.