Like the dénouement of an Ealing Comedy set on the high seas, eco-adventurers Raoul Surcouf and Richard Spink, and their skipper Ben Stoddart were finally rescued from their storm-battered yacht last Friday by - of all things - a massive tanker carrying 680,000 barrels of crude oil. 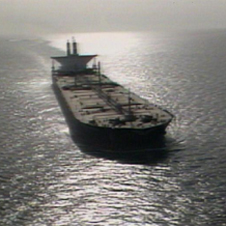 The group had been attempting to reach Greenland in 'Fleur', a 40-foot vessel powered by sails, solar panels and a wind turbine. Once there, Spink and Stoddart, one a gardener and the other a physiotherapist, planned to don skis and complete the first recorded carbon-neutral crossing of the Arctic land mass. Only it wasn't to be.

Spink told the Guardian: 'We experienced some of the harshest conditions known, with winds gusting hurricane force 12 ... The decision was made that the risk to our personal safety was too great to continue.'

That's when the Overseas Yellowstone sailed to the rescue, coordinated via Falmouth and Irish coastguards. By the reckoning of the Western Daily Press, a supertanker emits about 565kg of CO2 a kilometre. This equates to roughly 2,650 tonnes of carbon dioxide before it docks in Maine, plus roughly another 450kg per adventurer for the 747 flight home.

It's a sad ending for a trip that was intending to raise money for charity, carry out research and educate the schoolkids who were tracking the journey from the UK. Maybe the road to hell truly is paved with good intentions.

Image is of an oil tanker but sadly not the Overseas Yellowstone itself.

Related blogs: The Catlin Arctic Survey: daring, yes, but is the science any good?