Between a rock and a hard place: Britain's oysters pitched to battle pollution and climate change

An oyster that was dredged up from the English Channel on Monday, affectionately known as 'Shelly', may be the biggest Britain's ever seen, says the Telegraph. 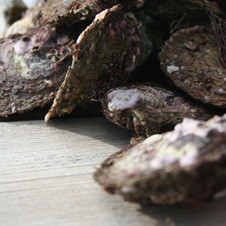 But that doesn't mean that Britain's oysters are in good shape. If anything, they could be about to take a hit from the twin threats of climate change and pollution, according to research published in the journal Aquatic Toxicology.

'Even a moderate temperature rise can lead to spawning failure' if an oyster is already battling with pollution, warns author Dr Gisela Lannig of the Alfred Wegener Institute, whose study was admittedly carried out in the much warmer waters of Virginia, US.

Why? Because both heat and pollution incapacitate the oysters' mitochondria, cellular power plants that turn oxygen into energy.

But the consequences of an oyster crash could be far more serious than a mere menu dilemma. Without oysters, coastal waters will be dirtier. A single oyster can filter about 50 litres of water a day, sifting out pollutants and impurities.