Since the 9/11 terrorist attacks, it has been widely believed that the pretty white lines in the sky created by aircraft at altitude - otherwise known as 'contrails' - are a significant contributor to global warming. 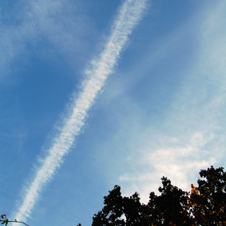 The theory goes that contrails can become cirrus clouds that trap 'outbound' longwave radiation (heat) from the Earth's surface and atmosphere. They do this better than they reflect 'inbound' solar radiation (sunlight) back into space, so their net effect is warming.

In order to prove this, you might use the 'diurnal temperature range' (DTR), which is the difference between peak daytime temperatures and minimum night-time temperatures. You would compare DTR when aircraft are flying, with DTR when they are not flying. If the range increased, that is, night-time got colder and daytime warmer, it would demonstrate that contrails were indeed trapping outbound heat and reflecting inbound sunshine.

The problem here is that air traffic never actually stops. But for three days after 9/11, that's exactly what happened when all commercial flights were grounded. A team led by David J Travis of the University of Wisconsin-Whitewater took the necessary measurements, crunched the data and published the findings in the journal Nature.

But now a US study by Dr Gang Hong of Texas A&M University has found that DTR variations of 1°C during September aren't all that unusual and that the change in 2001 was probably attributable to low cloud cover. Elsewhere, a team at Leeds University, working with the Met Office Hadley Centre, ran contrails through its climate models and found that you'd need about 200 times the quantity of flights over America to produce a significant effect on DTR.

So while climate warming contrails join endangered polar bears on the list of flawed factoids, it begs the question of why the idea gained so much traction. The three-day grounding was an unprecedented scientific opportunity, yes, but the sample size was arguably far too tiny to have ever produced anything but indicative findings and certainly nothing approaching definitive proof.