Could economic apocalypse save the world? Errr, no.

In terms of reducing carbon emissions, you'd have thought that a particularly vicious recession is just what the doctor ordered. As unpleasant as it is likely to get, could the downturn have a silver lining after all? 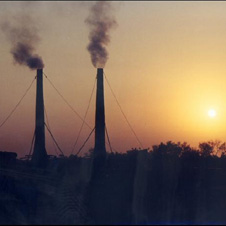 Every major carbon-producing industry has taken a big hit. Construction has slumped, consumer demand has stalled and the manufacturing sector is on the ropes. Consequently, we are moving fewer goods around the globe and key polluters like the automotive and airline industries are in dire straits. As the global economy shrinks, demand for power falls and more efficient use of resource increases.

Economist Alex Bowen, one of the authors of the influential 2006 Stern Review on the Economics of Climate Change uses the rule that a 1% shrinkage in the economy (meaning gross domestic product) equals a fall in carbon emissions of 0.9%.

With major economies forecast to 'contract' somewhere between 3.5% and 7% this year (depending on who's doing the predicting), that's still only an average of 4.7% less carbon emitted, and probably only for a couple of years.

A recession simply retards rather than addresses the underlying causes of carbon emissions, while simultaneously ensuring that expensive 'renewables' projects get shelved on a grand scale and governments start to consider massive building programmes as a means of spending their way out of trouble.

The Kyoto Protocol called for the European Union to cut its greenhouse gas emissions by 8% by 2012. If it takes this much pain for a temporary cut of perhaps 5%, you start to get a feel for the scale of the task and its potential economic consequences.