'Since records began': a brief guide to who's taking the temperature

By global temperature, at this time we mean predominantly Europe, bits of the then-British Empire (India, Australia, South Africa) and North America. It's probably fair to say that 'true' global coverage of readings in meaningful densities around the entire planet didn't arrive until post-World War Two. (See diagram.)

This map shows the 7,280 fixed-temperature stations in the Global Historical Climatology Network catalogue, colour-coded by the length of the available record. (Created for Global Warming Art by Robert A Rohde.) 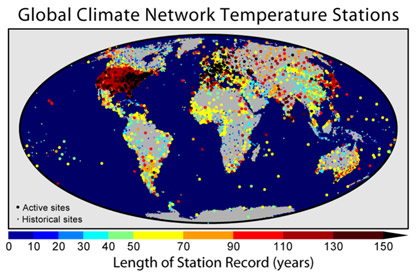 To this day, we still rely on a basic network of weather stations on land (many are still 'Stevenson screens' - those things that look like beehives on sticks) and ships at sea. But the sophistication and ambition of climate monitoring has literally sky-rocketed in the last 20 years, not least with the European Space Agency's Earth Explorers programme.

So there you have it. When someone says 'since records began', they probably mean 'since about 1880'.