We were back in action on Tuesday night at Galabank where we shared the points in a 1-1 draw with Berwick Rangers.

I can vouch for everyone in the Annan dressing room when I say that we were disappointed to pick up just one point but I'm sure Berwick will feel exactly the same.

When I think back on the game, however, a draw was probably a fair result.

It was a bit of an up-and-down performance from ourselves but I hope that we can be allowed that bit of inconsistency from last night because we only just played our second game since 12 December. 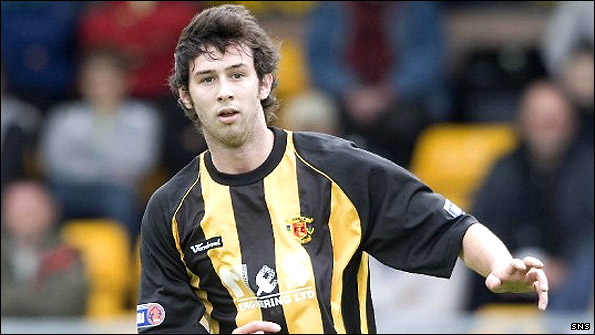 Graeme "Belly" Bell turned in a great performance on Tuesday against Berwick Rangers
While I was away for a few days' holiday over the weekend, the squad had to make do with an almost full-scale bounce game between themselves.

I'm sure everyone understands that you never get the same out of these games as you do when it's of a competitive nature - especially when it's our coach Piedro Baldotto that's refereeing!

It gives players who have not played too much recently the chance to get some much needed minutes in a match situation.

Guys like Lewis Sloan and Alan Inglis, as well as Bryan Gilfillan, Mike Jack and Derek Townsley, who have all been injured recently, had the opportunity to prove their fitness to the manager.

Gilly and Jacko both returned to the starting line but big Degsy missed out again in what was a slight change to our normal formation.

We went with just the two up front due to the performance of Graeme Bell and David Cox from the bounce game on Saturday. Apparently they worked really well as a pair and I suppose it just goes to show that these type of training exercises are never meaningless.

I have to say that I thought Belly was superb and possibly put in the best performance from any of our strikers this season.

It's been well documented that it's a position we have struggled with this season and players have been in and out as the manager has tried to get the best combination. Belly certainly set a standard against Berwick that the rest will need to follow and hopefully he himself will continue.

Scotland manager Craig Levein has just overseen the first European Championship draw of his reign and it has once again thrown up a tough qualifying campaign for the national team.

This is to be expected, given our falling world ranking as a consequence of our performances in recent qualifying matches.

Alongside the reigning European Champions Spain, we are also joined by Czech Republic, Lithuania and Liechtenstein. Spain is the box office draw, of course, and it will be great to see them at Hampden Park.

We usually save our best performances for these type of games when nothing much is expected of us so let's keep our fingers crossed for something similar, although we will be doing well just to get close to the likes of Xavi and Andres Iniesta!

I must admit to not knowing too much about Liechtenstein but right away Scotland must be looking at a battle for second place with the Czech Republic.

We will get an indication of just how tough that will be when they visit Hampden Park for a friendly early next month.

Scotland have also struggled against Lithuania in past qualifying games where most of the games have been tight so it might not just be the three-team race for those qualifying slots.

It is a new regime for the national team and I am quite excited with Levein at the helm. If the fixture list is a wee bit kinder to us than that of our last campaign, I don't think that second place is outwith our reach.

Hi there, I'm Chris Jardine, midfielder with Scottish Third Division side Annan Athletic. I hope, throughout the season, I can give you a good insight into life at the newest Scottish League club and maybe even a few laughs along the way.

You can stay up to date with Chris Jardine via these feeds.