As one door closes another opens, they say. So it is with my blog.

I am being absorbed into the BBC News family and just like %3Ca%20href="https://www.bbc.co.uk/programmes/b006q2x0/features/past-doctors">Doctor Who is occasionally forced to regenerate, I am undergoing a bit of a makeover.

The new blog will continue to bring you behind-the-scenes information and background details of some of the stories we cover.

You will also be able to comment on the films we make.

This blog is now closed and is being archived. To follow my new blog just go to %3Ca%20href="https://www.bbc.co.uk/news/correspondents/chrisjackson">bbc.co.uk/chrisjackson

See you on the other side...

Whenever a boat sails through the Farne Deeps off Northumberland it seems you've every chance of spotting %3Ca%20href="https://www.nmfs.noaa.gov/pr/species/mammals/cetaceans/whitebeakeddolphin.htm">white beaked dolphins. 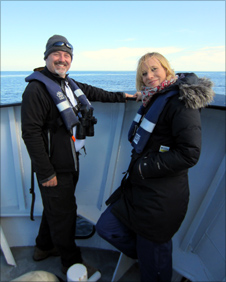 Kirsten O'Brien joined naturalist %3Ca%20href="https://www.northernexperiencewildlifetours.co.uk/news.php?story=40">Martin Kitching on a survey of dolphins in the North Sea, and when they appeared her excitement was obvious. Having them jump up out of the water alongside the boat or surf the bow wave can't do anything but leave you smiling.

We humans are rather duplicitous as a race. As you can see in %3Ca%20href="https://www.bbc.co.uk/programmes/b01nnnlq">the programme (Monday, 20 October 1012, 19:30 GMT) we have environmentalists who are urging the government to create protective zones along the Northumberland coast and those who argue against it. 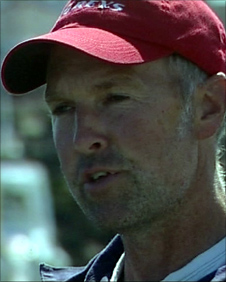 Martin and other wildlife conservation groups warn that just protecting the sea bed is not enough, the whole watery habitat needs to be included.

Michael Bold is a fisherman in Amble, who worries his profession might become endangered if that's part of the proposed %3Ca%20href="https://www.defra.gov.uk/environment/marine/protect/mpa/mcz/">marine conservation zones.

He argues pilot areas should be set up to assess what impact it has both on wildlife and the fishing industry.

What's your take? Why not leave a comment on this blog and let us know?

%3Ca%20href="https://www.bbc.co.uk/blogs/chrisjackson/2012/10/watching_the_detectives_what_w.html" rel="bookmark">Watching the detectives. What we learn when the police investigate their own

Be careful what you wish for. An old adage that many of us should heed, especially as your best intentions may backfire.

When %3Ca%20href="https://www.bbc.co.uk/programmes/b01nj43s">Inside Out airs tonight (19:30hrs Monday, 22 October 2012) it will be the second case in which we reveal how a police force, trying to root out rogue officers, ends up shining a light uncomfortably brightly into its own affairs.

Back in 2010 we reported on the case of %3Ca%20href="https://www.bbc.co.uk/news/10581584">Maurice Allen. The Durham officer had been selling on guns handed in to the police for safe disposal. He was convicted, but in an exclusive interview with Inside Out he revealed how the force's internal control of guns and licensing was a mess. At his trial the judge branded Durham's firearms procedures as "extremely lax, if not chaotic".

In our latest episode we speak to Paul and Suzie Thompson. He was an undercover detective with %3Ca%20href="https://www.northumbria.police.uk/">Northumbria Police and she was a high powered exec on Teesside.

He stupidly ended up using cocaine behind his wife's back. His bosses meanwhile thought he was linked to a drug dealing gang and launched a big anti-corruption investigation.

When Suzie was arrested it all came out of the blue and she found herself accused of being part of this drugs ring.

At court, the couple were cleared on the dealing charges. They'd always denied conspiracy to supply and when the evidence against them was revealed it left them wondering how on earth it could ever have led to a prosecution.

The jury was told Paul Thompson had a conversation in which he said goods were to be delivered at the weekend as they had to be cut then. His wife had texted a friend saying they were celebrating with a "snifter to get in the mood".

However when the whole picture emerged at trial it was revealed his chat was in fact in a timber yard when he was buying wood, and Suzie was pouring a "snifter" of whiskey to celebrate the start of the festive season.

Paul Thompson accepts his police career was always going to be over. He admitted taking cocaine and he was convicted of possession.

But for his blameless wife the fall out of the police investigation was devastating. She lost her job because of all the adverse publicity.

Possessing a %3Ca%20href="%3Ca%20href="https://news.bbc.co.uk/cbbcnews/hi/newsid_2120000/newsid_2120400/2120454.stm?">class A drug would have been enough to root out a bad apple from their own ranks; However the internal investigations team were adamant they had a drugs mastermind on their hands, even though the evidence as revealed in court just didn't stack up.

"Paul Thompson was a serving officer convicted of possessing a class A drug and misconduct in a public office - this was entirely inappropriate behaviour for any employee of Northumbria Police.

"We carefully consider each investigation we undertake, to make a decision purely on cost would be wrong, we are obliged to investigate thoroughly if concerns are raised to us and will continue to do so".

Northumbria Police confirmed that they'd had a complaint from Mrs Thompson which was investigated - but not upheld.

No one can doubt the police are right to fight corruption within their own force but cases like these are bound to be high profile. We shouldn't be surprised that no-one is perfect.

Those that have done wrong should expect to be punished, but those holding them to account should be prepared for the truth, the whole truth and nothing but the truth to be revealed about all those involved.

Hi, I'm Chris Jackson - presenter of the North East & Cumbria's very own current affairs programme, Inside Out. Welcome to my blog where I'll reveal some behind-the-scenes goings-on and share my thoughts on the stories we cover.

For the latest updates across BBC blogs,
%3Ca%20href="https://www.bbc.co.uk/blogs">visit the Blogs homepage.

You can stay up to date with Chris Jackson's Blog via these feeds.

More from Inside Out

%3Ca%20href="https://www.bbc.co.uk/blogs/chrisjackson/2012/10/when_it_comes_to_care_of_the_e.html" rel="bookmark">When it comes to care of the elderly are North East councils the meanest around?

The Beatles famously asked in one of their songs; "Will you still need me, will you still feed me, When I'm 64?"Life expectancy has gone up since they penned the song, but the question hasn't gone away. Just who...

%3Ca%20href="https://www.bbc.co.uk/blogs/chrisjackson/2012/10/is_cumbria_digging_itself_into.html" rel="bookmark">Is Cumbria digging itself into a hole over nuclear waste?

Chris Jackson standing on top of nuclear waste storage facility at Sellafield It is possibly the most important decision Cumbrians will ever have to make; should the county volunteer to become the home of Britain's nuclear waste?At the moment...

%3Ca%20href="https://www.bbc.co.uk/blogs/chrisjackson/2012/09/inside_out_is_coming_back_to_y.html" rel="bookmark">Inside Out is coming back to your screens next month

Chris Jackson abseiling above Buttermere, Cumbria The closer we get to coming back on air the quieter the office gets. It's heads down by all the production crew to get the stories we are working on to the wicket...

My destination in FinlandAs far as work assignments go - there are good ones, bad ones and ones you count your lucky stars to be sent on.This weekend I get to go to a country I've never been to...