"They started in that tournament in July. July! Crikey. I was on the beach." Sir Alex Ferguson on why Roy Hodgson deserves the Manager of the Year award, after steering Fulham to the Europa League final.

"It was a great gift."
Sir Alex Ferguson on the calamitous back-pass from Steven Gerrard that virtually handed Chelsea the title.

Today people tend to show petulance, and I am talking about Tuncay and Kitson here....they live in a bubble and realities of real life wash by them.'' Stoke boss Tony Pulis after Dave Kitson and Tuncay got the hump following their substitutions at Chelsea. 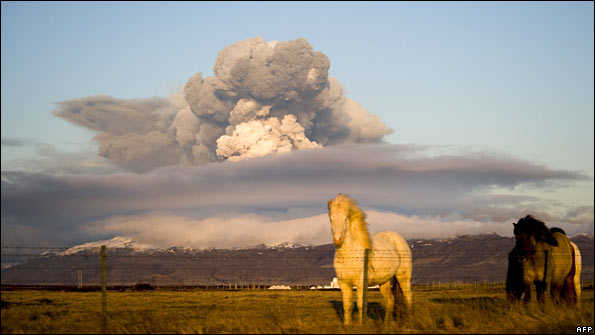 "I blame Kitson myself
"Now it's like I'm responsible for everything. Cloudy in Stoke? That's Kitson's fault. The traffic's terrible? Blame Kitson for that too."
Kitson hits back to show that he is not at all petulant. Much.

"I went to wave at a few fans and almost got strangled. I wish I hadn't brought my wife as she nearly got beat up!"
Blackpool manager Ian Holloway takes his life - and his wife - in his hands after celebrating his team's place in the play-offs.

"When I came here I was promised a bonus if I kept the team in the division. If we go up I'd better check I'm still eligible for it!"
Holloway on the downside of winning promotion to the promised land.

"That's his biggest break of the afternoon so far, Dennis!"
Ken Doherty after Mark Selby broke a glass before resuming his quarter-final match with Ronnie O'Sullivan.

"You need to get your eyes tested!"
O'Sullivan to referee Leo Scullion, after he called 'touching ball' in the match with Selby.

"He's a Geordie, he's down to earth, and it's all about facts with him, not emotions. Don't mess with this geezer - he ain't got a sense of humour."
Snooker supremo Barry Hearn on the recuitment of ex-Scotland Yard chief super David Douglas to lead the investigation into allegations of match-fixing.

"We'll lock him up in a room or something so he can't go!"
Fulham keeper Mark Schwarzer on the desperate measures needed to keep hold of manager Roy Hodgson.

"Last season, we finished second and they wrote a book about it called 'It's A Miracle'. We are champions and that's more than a miracle!"
Steve McClaren - more than a miracle worker - after leading FC Twente to their first Dutch title.

"If Manchester want to have him, they have to sign over two oil fields to us. Or cart over at least two big lorries tightly packed full of English banknotes."
Borussia Dortmund managing director Hans-Joachim Watzke on what it will take for Manchester United to prise Neven Subotic away.

"I did think about singing, yeah. But I wasn't sure what the fans were singing, so I would have got tongue-tied. I could have done a wee 'Mr Blue Sky or something.
Birmingham boss - and ELO fan - Alex McLeish thankfully resists the urge to do a Phil Brown with the mic after Blues' last home game. 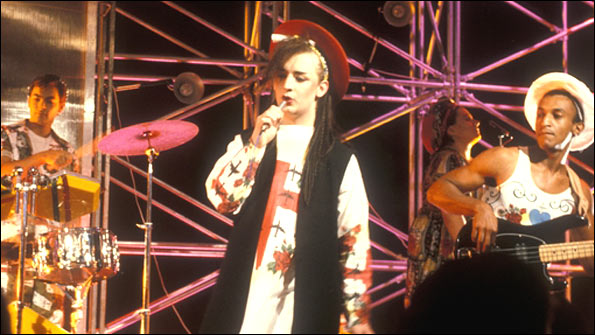 Let's hear it for the Boy
"I remember seeing Boy George sing for the first time and having a debate with my mates as to whether it was a boy or a girl. The fact he was called Boy George was a bit of a clue."
Matt Le Tissier on his 80s dilemma.

"I looked a bit of a wally to be honest, but I'll take that. No offence to ginger people but I'd play in a ginger wig if it meant me playing for this club."
Dagenham striker Paul Benson after scoring against Hereford while wearing a Phantom of the Opera-style mask to protect his broken nose.

"I've lived here for seven years and watched it twice. It's even worse than French TV."
Arsenal's Gael Clichy - not an EastEnders fan.

"We've won seven out the last eight league games, and we can't do any more than that."
Harry Redknapp ahead of Spurs' clash with Manchester United.

Q. "Hi, Andrey! My question will seem stupid, but I want to know. Why do players play football in boots rather than in other footwear? You're so handsome! You're the best! YOU ARE SUPER!!!!"
Arshavin: "It's better than playing in fins or on skates."
Another gem from the Arsenal star on his website.
(South African Devil)

"Chelsea should be very happy that Kyrgiakos has the ball. He is like a geek bearing gifts!"
Mark Lawrenson on 5 live's coverage of Liverpool-Chelsea.
(davep, UK)
But will the geek inherit the Earth? Ed.

"If you expose the opposition's weaknesses enough, then, in the end, those weaknesses will be exposed." Blackburn boss Sam Allardyce stating the obvious after beating the mighty Arsenal.
(Patrick, UK)

Commentator 1: "Looks like he's pulled his groin and has to come off."
Commentator 2: "Yeah, he must have done it during the one or two touches he's had in this game..."
Commentators describing Maxi Rodriguez's impact after 43 mins during Liverpool v Chelsea.
(Eric7sson, Australia)

"This chance is unmissable and well, er, he misses it!"
Alan Hansen on Match of the Day 2 about Dimitar Berbatov's miss against Sunderland.
(Vickki, England)

Interviewer: "Teko, what's your favourite food?"
Teko: "It's hard, but I'm going to have to say breakfast."
Heard during an interview with South Africa and Orlando Pirates midfielder Teko Modise.
(Dovi Brom) 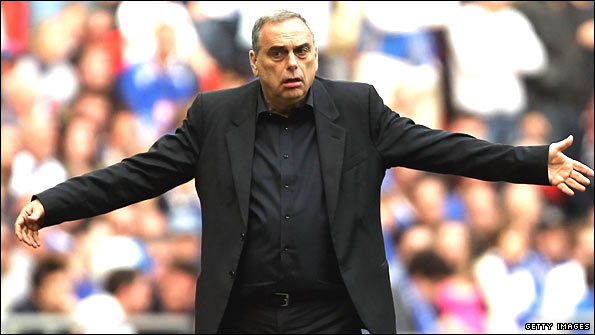 Why use one word when two will do?
"I just want to say one simple word. Thank you."
Avram Grant in his speech to Portsmouth fans. I don't think maths is his strong point.
(Sam, England)

"I have been surprised so many times this year - so I am not surprised that I am surprised."
West Ham boss Gianfranco Zola about the bid for West Brom's Graham Dorrans.
(Bestie, Shrewsbury)

"If they don't get this, we're looking at a champagne super over!"
David Lloyd going all Oasis during the tense finale of the New Zealand v Sri Lanka Twenty20 opener.
(Jack Allen, UK)

"There are those with commentators' eyes, and then there's Willie Thorne."
John Virgo on Willie Thorne calling the line of a plant wrong at the World Snooker Championship.
(Matt Riley, UK)

"After that (the Simon Davies goal), you just could smell it - Hamburg got very nervous."
From Chris Coleman after the Fulham-Hamburg game.
(MisterDav)

"The referee looks at his whistle."
Commentator Dave Woods, at the end of the first half of extra-time in the Liverpool-Atletico game. He blew his watch straight after!
(Greg Stewart, UK)

"It's difficult to find a defect on Mourinho, perhaps he is a little introverted but he is marvellous."
Inter MIlan president Massimo Moratti talking about Mourinho!
(Will Tofts, Leeds)
He is officially the first person ever to describe the Special One as an introvert - Ed.

"Tried on a pair of Speedos...absolute budgie crushers...a definite NO!"
David 'Bumble' Lloyd on Twitter while at the Caribbean for the World Twenty20.
(Anthony Ko, UK)

"We're just a town full of bigots!"
Rochdale fans in the wake of Gordon Brown's visit to the town and the subsequent 'Bigot-gate'.
(Dave Jones, England) 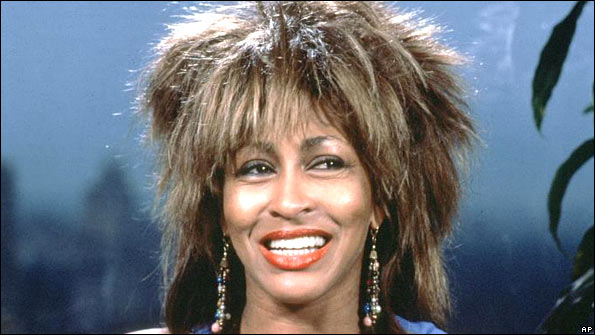 Eat your heart out, Jamo

"Tina, Tina, give us a wave!"
Wolves fans take the mickey out of David James' 'Tina Turner' afro at Portsmouth.
(Basunu)

"Carlo, Carlo, give us a wave!"
Chelsea fans at Anfield.

Ray Wilkins stands up and translates in Ancelotti's ear. Carlo proceeds to wave at every word that sounds like 'Carlo' for five minutes.
(John H, UK)

"One goal, we only want one goal!"
Sang by Leeds fans, seconds before Charlton's Akpo Sodje obliged. Perhaps they should have been a bit more specific in their chant?
(Dave, England)

"Que sera sera, whatever will be, will be, we're going to Shrewsbury, que sera sera."
Southend and Stockport fans look on the bright side of relegation.
(Bearded Shrimper, UK)

"Are you Jersey in disguise?"
Guernsey fans to Liverpool's county league representative team, when we went 5-2 up to win the FA NLS trophy.
(Leon Robertson, Guernsey)

"Excuse me, I'm just trying to find something here."

Another song comes and goes and he continues skipping through, track after track...

"And after all that, it wasn't even there."
Matchday announcer at Glentoran v Clitonville.
(Conor)

"Good afternoon and welcome to Stainton Park - and if anyone from the BBC is here, I am available this summer."
Tannoy announcer from Radcliffe Borough against Harrogate Railway, after he was mentioned in last week's Quotes of the Week.
(James Heyes)

BANNER OF THE WEEK
'Cockneys for a day'
Seen among Liverpool fans at Chelsea game.

Add any quotes, chants, stadium announcements etc below or by using the old school email postform.