"He's PlayStation."
Arsene Wenger after Arsenal got themselves into another fine Messi at the Nou Camp.

"To call him PlayStation, as Mr Wenger did, is a great definition. I don't know what level he'd be at, though - three or even four."
Barcelona coach Pep Guardiola hails the virtual football played by his four-goal wonder kid.

"In a way, as a young player growing up and still learning about the game, it
was a fantastic experience just to watch some world-class players. It was like
someone was holding them with a PS3 controller, controlling them all the time.''
But it was Theo Walcott who started the console comparisons, following the first leg at the Emirates.

"It's Easter - you know, a time of resurrection. That's what we want to do here."
Wenger ahead of the return with Barcelona. Sadly, Arsenal's rebirth lasted all of two minutes.

"I am going to get drunk tonight."
Gianfranco Zola hits the bottle after his West Ham side showed plenty of it to snatch a point at Everton. 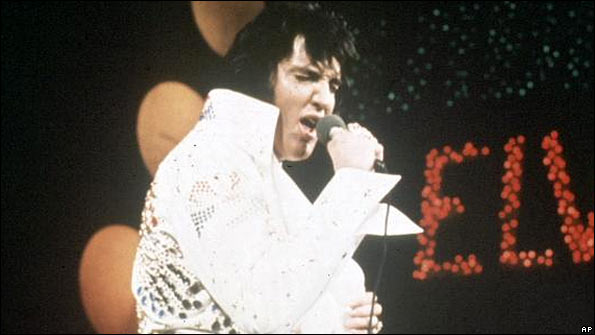 Elvis does his best Hermann Hreidarsson impression
"He is a brilliant man, an unbelievable character. For the Cup final, I took
them out before and we all went to an Italian restaurant. Hermann got on the
karaoke and brought out the best Elvis Presley suit, the white one with the big
shoulders. Hermann's voice is diabolical, but the actions are fantastic.''
Spurs boss Harry Redknapp pays tribute to his former player, Portsmouth defender Hermann Hreidarsson, who recently suffered his own Heartbreak Hotel with a ruptured Achilles.

"I did nothing wrong. I didn't drop my trousers. If anything, I was being affectionate and tasteful!"
QPR boss Neil Warnock after showing his (clothed) backside to Leicester fans who mockingly asked him to give them a wave.

"I'd like to stick two fingers up to the bookies - a finger on both hands - because they tipped us for the drop. But look how well we are doing now."
Blackpool boss Ian Holloway after the 2-0 win over Doncaster kept them on the fringes of a play-off place.

"It's a massive match. If there is a bigger game than a six-pointer, then this will be it."
Plymouth manager Paul Mariner on this weekend's visit to fellow-strugglers Watford.

"It was more a pale ale performance than champagne."
Southampton boss Alan Pardew after the 2-1 win over Leyton Orient.

"There is a general move to level the playing field somewhat, but even if we
all had the same bikes and rode naked, I still think we'd be competitive.''
British Cycling performance director Dave Brailsford insists the GB team cannot be stripped of their talent.

"Today - April Fool's Day - Northampton have announced they have signed a new contract with Soane. "
Saracens chief executive Edward Griffiths continues the war of words with
Northampton over prop Soane Tonga'uhia, who both clubs claim to have signed for next season.

"It's a bit like watching your mother-in-law drive over a cliff in your brand
new car. There are mixed emotions.''
Bradford Bulls coach Steve McNamara after seeing his side surrender a 20-6 lead to draw 20-20 with Super League rivals Leeds at Headingley.

Theo Walcott: "I did 100m in year nine in about 11.5 seconds. It's been a good six or seven years now, so I can potentially do it much, much faster."
(Brief and awkward silence)
Arsene Wenger: "I can do it in 17!"
Walcott and Wenger at a press conference before the Barcelona game.
I, for one, would like to see Wenger do that!
(Etu, Mongolia) 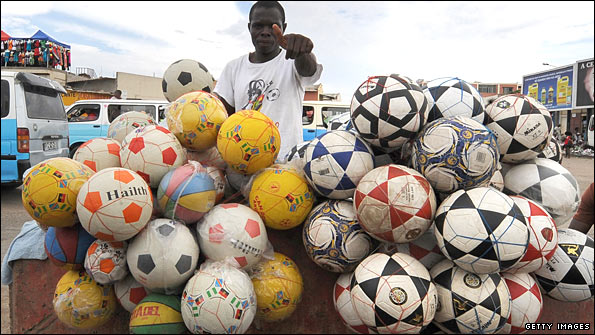 "This is the first time he's scored in a game, the little genius."
BBC live text talking about Lionel Messi scoring the fourth goal in Barcelona's win against Arsenal. I thought he scored a hat-trick just before that?!
(Ashley Koya, England)
Aah, that's just our Stevo (president of the Messi supporters' club) getting over-excited and accidentally missing out the word 'four'. Little Lionel can even force an error from the indomitable Stevo - that's how good he is - Ed.

"We didn't start the game that well."
Sir Alex Ferguson after the first leg of the Bayern game. A goal after 63 seconds and he's not happy with that?!
(Jeff, Australia)

"It would be an act of remarkable foolishness if Wayne Rooney turns up in Munich in a few days' time ready to play, just a week after he stretched ankle ligaments to breaking point."
Also foolish, because the game is being played at Old Trafford....Ronnie Whelan's article on Rooney in Monday's Irish Evening Herald.
(amawaster)

"If I lost a £50 note, I'd want (Southend United winger) Francis Laurent alongside me, because he's always got his head down, looking at the ground."
Commentator at Southend v Gillingham.
(bearded_shrimper)

"If you've got any kind of wood, touch it now."
Swindon commentator while Town were 3-0 up against Leeds with minutes to go.
(Matilda, Knaresborough)

"It's not an easy game. They've got Robben, they've got Ribery, they've got Schwarzenegger."
A Manchester United fan on Sky Sports gets slightly carried away with the strength of Bayern Munich's midfield ahead of the Champions League quarter- final.
Jonny Madill, Belfast)
Do you think he meant Schweinsteiger? Ed. 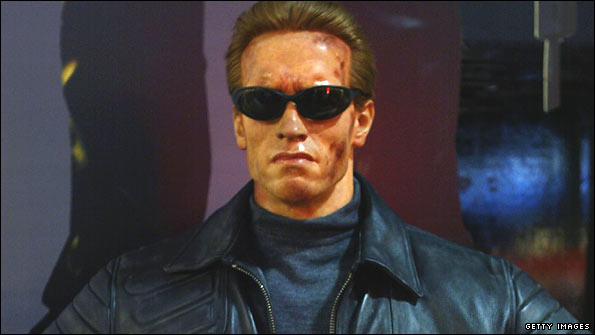 He'll be back - at Old Trafford
"The ball has skidded away off a surface even greasier than Adam Miller's hair."
Gillingham's commentator for the blind, Tom George, at the Gills v MK Dons game.
(Peter, Gillingham)

"I think a success would be to win as many wins as possible and hopefully go on a winning run and win the Scottish Cup."
I think Celtic's interim assistant manager Johan Mjallby wants to win.
(Leo oh oh)

"Well, he's breathing, and got a pulse."
Middlesbrough boss Gordon Strachan when asked on BBC Tees about the qualities new loan signing Jay O'Shea would bring to the side, lamenting Boro's lack of midfielders.
(downingforengland)

"He may be bald, but he has certainly had a hair-raising experience tonight!"
Channel 5 commentator after one of the 'extra' officials saw a firework land on the pitch, inches away from him, during Liverpool's defeat by Benfica.
(George U, Bristol)

samara4ever: "How do you see yourself in 50 years?"
Andrey Arshavin: "78-year-old man, with aching legs and a glamorous walking stick. :)"
Another belter from Andrey on his website.
(Rob Nox)

"I've never seen him here on a Sunday."
Jim Furyk on Tiger Woods' surprise appearance at Augusta. Obviously, Jim has not seen the last 13 Masters, where Tiger has played the final round on the Sunday - including four wins!
(Simon Batty, Ipswich)

"He now has more goals for Everton than syllables in his name."
Commentary when Bilyaletdinov scored his sixth goal of the season against West Ham on Sunday.
(Libby Curran, USA)
Hasn't Bi-ly-a-let-di-nov got six syllables? Ed.

"Goal scored by Alison Desire or whatever his name is."
Dean Windass on Soccer Saturday after Alassane N'Daiye scored for Crystal Palace.
(Graham, England)

"King Kanu, Kanu,
He's older than me and you,
His real age is 62,
King Kanu, Kanu."
Sung at Fratton Park to the 'experienced' Nigerian.
(Daniel Fripp, Ireland) 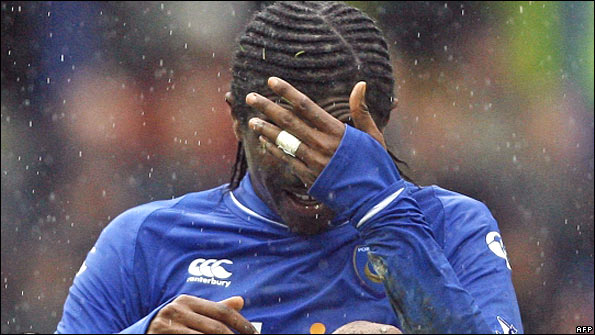 Kanu reacts to news that his pension will be paid late again
"You're just a bus stop in West Ham!"
Chant by Colchester supporters to Millwall counterparts.
(CompleteuttermadnessCUFC)

"Fergie, Fergie, sign him up!"
Man City fans after Burnley's Steven Fletcher was declared man-of-the-match in their 6-1 beating!
(Chris, England)

"We're going to Portsmouth, you're going to Bournemouth."
Swindon fans to Leeds during the Robins' 3-0 win.
(Fergie, UK)

"We're only here for the weather!"
Reading fans after a dull start with the sun out.
(Hugh Thomas, England)
Not sure which game Hugh meant...Ipswich? Ed.

"Are you West Ham in disguise?"
Sung with gusto by us (Chelsea) to Villa during the 7-1 thrashing.
(Virginia Harrow, England)

"And that score for you again, Chelsea 7, Villa 1."
I think the St Andrews announcer got that score in five times as the fans left the Birmingham-Arsenal game.

"Would the owner of the BMW estate, registration XXXXXXX, please return to your car as it has started by itself."
Stadium announcer at Northampton v Wasps.
(EssexCrookers)

Add any quotes, chants or stadium announcements you may have heard at the bottom, or by using this email postform.