(Actually make that three if you were one of the locals enjoying a quiet pint in Wimbledon's Wibbas Down Inn when Pamela Anderson popped in - and very nearly popped out - for a glass of wine following her recent panto stint.)

But it's the white stuff that has dominated both the front and back pages all week, as the big freeze annulled more matches than Elizabeth Taylor's divorce lawyer.

Both League Cup semi-finals fell foul of the adverse weather conditions (London Underground speak for snow) - yet a few miles down the road Stoke miraculously managed to play their game with Fulham. Could it be they're made of sterner stuff in the Potteries? Or maybe it had something to do with the large sum of money Stoke trousered for stepping in at the last minute to fill the televised slot vacated by Blackburn. Kerching!

Incidentally, there was a nice little line in the Guardian's Fiver when it became likely the game at the Britannia would go ahead...."the prospect of seeing Rory Delap freeze solid on the touchline, mid throw-in at the moment of maximum contortion remains mouthwateringly real". 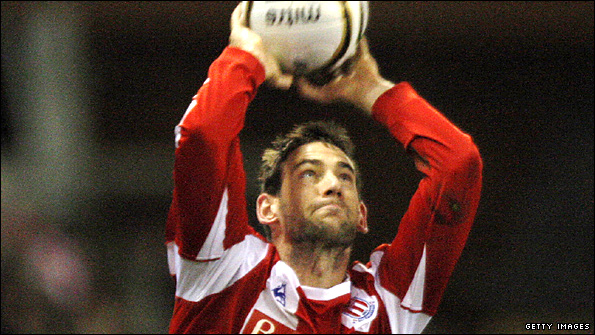 Meanwhile, El Hadji Diouf was using the Arctic conditions to explain away his recent indifferent performances for Blackburn. The player left fans spitting mad when he conceded: "This time I don't have my best form - maybe it's too cold." And what better way for Diouf to beat the big freeze than by earning a straight red and a three-match ban for chopping down Habib Beye in the FA Cup defeat by Aston Villa?

Elsewhere, there were the obligatory shots of frost-bitten pitches, Fernando Torres having a snowball fight and even a snowman on the pitch complete with pasty complexion, red nose and stony expression...oh, hang on a minute, that was Sir Alex Ferguson after Manchester United's FA Cup disaster against Leeds.

Fergie, to his credit, was being so magnanimous in defeat I thought he'd metamorphosed into Roy Hodgson, but the United boss couldn't help reverting to type at the end of the interview, moaning: "How can (the ref) give five minutes of injury time? It's an insult to the game - an absolute insult." That would be the same Sir Alex who after a late Arsenal equaliser in 2008 said: "It was the 95th minute of their usual seven minutes of injury time."

Staying in the Cup and as the issue of poor attendances raised its head again, three cheers to the 2,500 hardy Geordies who endured an 800-mile round-trip to watch Newcastle draw 0-0 at Plymouth in conditions so cold some of them even kept their tops on.

While everyone else was wrapping up warm, Blackpool boss Ian Holloway was taking his clothes off in public, throwing down his scarf, hat and gloves on the touchline after two of his players saw red against Ipswich - and saving himself a few precious seconds as he swiftly followed the pair into the early bath.

Ollie's little strip-tease will pale into insignificance if Chelsea sign a player in the transfer window, with Carlo Ancelotti insisting he would run around naked in the snow if there were any new arrivals at the Bridge. No offence, Carlo, but even Gok Wan would have his work cut out there.

It might be hard for Roman Abramovich to keep his hands in his pockets if the faltering Blues drop even more points in the absence of Didier Drogba, whose name surprisingly cropped up in the House of Commons this week.

Liberal Democrat Chris Huhne used the Ivory Coast striker as an example during the ongoing debate surrounding identity cards for skilled migrants, declaring: "Making Didier Drogba carry a piece of plastic to prove his identity is a waste of tax payers' money." He has a point, although the same argument would not apply to some members of the Liverpool side, who have gone missing so many times this season people have forgotten what they look like.

Moving on and in the week that Joey Barton dismissed footballers as idiots (next week Mariah Carey has a dig at music industry divas), Drogba's team-mate Frank Lampard did his best to keep it real with a trip to the pound shop. It's not clear whether he bought anything - although his weekly wage could get you a hell of a lot of stuff you never really wanted in the first place.

Lampard also bizarrely found himself at the top of the South Korean pop charts when he was name-checked in a song called Mister by girl band Kara - although the lyric "cute, chubby Frank" might come back to haunt him the next time Chelsea visit Upton Park.

Still at least he won't be the most embarrassed person at the next family get-together, following cousin Jamie Redknapp's shocking performance alongside wife Louise in that cheesy ad for a well-known travel company. They "fantasise about it" - everyone else is sick of it.

You can bet Jamie's old man will be giving him a bit of stick - although he was more concerned with defending his fellow managers this week. Redknapp hit out at impatient chairmen following the recent departures of Gary Megson and Alan Irvine as the managerial merry-go-round span faster than my backside when I made an unscheduled appointment with the icy pavement on Thursday.

Darren Ferguson filled the breach at Preston, Irvine moved in at Hillsborough, while Owen Coyle swapped one relegation battle for another as he made the short journey from Burnley to Bolton. That's right, Owen Coyle who turned down Scotland and Celtic because "I knew I had to stay and carry on this incredible adventure..."

When the I's have been dotted and T's crossed, you will almost certainly hear Coyle saying "this is the only job I would have considered leaving Burnley for".

We know all about managerial changes down at Loftus Road, with captain Mikele Leigertwood admitting: "It's easier to stick to 'Sir' or 'Gaffer' rather than trying to remember their names."

But even he must have been shocked to read an article on the Vital Accrington fan site (since removed) about QPR's possible interest in their young player Robert Grant. The piece read: "Grant has been offered a new and improved contract...however QPR gaffer Roy Keane could be set to throw a spanner in the works..."

Meanwhile, Keane's old sparring partner Patrick Vieira returned to the Premier League with Manchester City for a reported £130,000 a week and the promise to "show Roberto Mancini I'm the same player as when he was in charge of Inter". What, past his best? 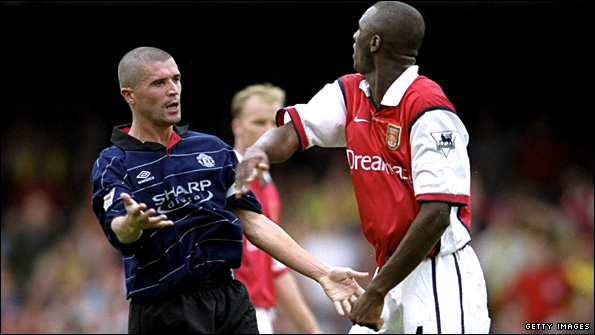 Ah, the good old days
Vieira is hoping to play his way into contention for the World Cup - a dream that appears to be slipping away for Michael Owen. Thankfully help is at hand in the unlikely form of Geoff Boycott, who wrote to Owen suggesting he try the ancient Chinese art of Feng Shui to get his season back on track. No disrespect, Geoff, but the only furniture-arranging that will get Owen into the United starting line-up is by arranging to drop his sofa on Wayne Rooney's foot.

And finally, story of the week came from devoted father Jamie Carragher, who declared: "My son is six or seven-years-old and I'd love to take him to Wembley to watch Liverpool."

Right, that's it folks, but before I go I promised I'd wish my daughter Nancy a happy birthday as she turns five today (Friday). Or was it six?