Happy New Year everybody. Having done the Quotes of the Year and Quotes of the Decade parts one and two in the past week, I was tempted to go all Steve Redgrave on you and suggest that if anyone saw me near a quote again, they had permission to shoot me.

But of course I wouldn't do that - the new year is upon us and brings with it stacks more quotes, chants and stadium announcements to share with you. The inbox has been stacking up over the festive period so some of the titbits you are about to read may be more than a week old, but they deserve an airing so I'm going to print them anyway.

And as a special Brucie bonus, there's a little section for some of the quotes you informed me I had missed from the decade collection. If you didn't catch them (where were you?) click here for part one and here for part two. Oh, and here for the Quotes of the Year.

"It's so quiet, you could hear a fly's dandruff drop."
A Sid Waddell classic during the PDC World Darts final between Phil Taylor and Simon Whitlock. 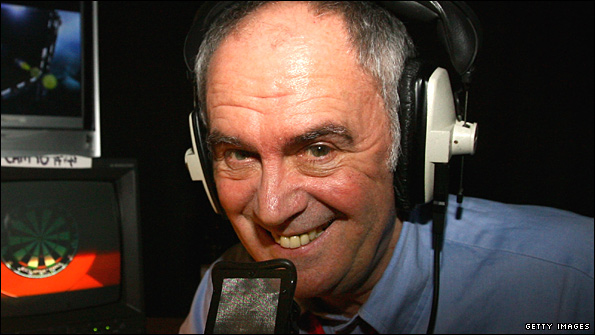 "How can he give five minutes of injury-time? It's an insult to the game - an absolute insult, but they keep doing it."
Time was not on Sir Alex Ferguson's side during Manchester United's shock FA Cup defeat by Leeds.

"I don't know if my scarf is lucky. I wore it because it was cold...I could have done with two scarves today!"
Roberto Mancini is having a scarf after Man City's FA Cup win at Middlesbrough.

"In fact, I think we're the only club in the Premier League that has an
all-weather surface that's no good when the weather is bad. The surface is
frozen. Lord knows who put that in. Typical."
Gary Megson hits out at Bolton's alternative training facilities, a few days before being frozen out himself.

"I make the decision (to take off Ivan Klasnic) and it goes down
like the Bismarck."
Megson after the 2-2 home draw with Hull, hours before he was sacked.

"Here in Scotland, you have football, you have the pubs, the church and after
that comes the family. First is football."
Hearts manager Csaba Laszlo on the passion for football in Scotland.

"It's easier to stick to 'sir' or 'gaffer' on the training ground than try and remember their names."
QPR captain Mikele Leigertwood on the difficulties of keeping up with the managerial changes at Loftus Road.

"I had a nice time over Christmas. I watched EastEnders - blimey, that makes my job look easy!"
Wolves manager Mick McCarthy knows how to cheer himself up.
"The ideal scenario would be for us to get to the final and for Chas 'n' Dave to re-form and do us a Cup final song. I've just about got over their split. I've been in counselling ever since."
Newcastle boss Chris Hughton, a member of Spurs' FA Cup-winning sides of the 80s who had 'memorable' songs penned by Chas 'n' Dave. 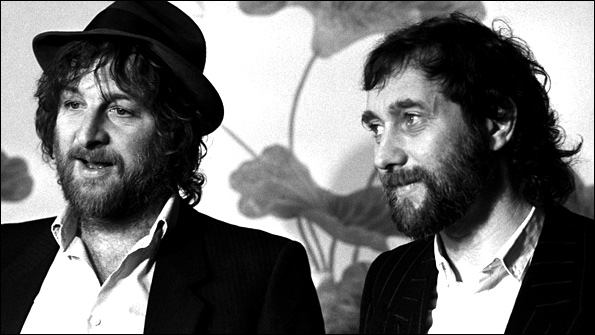 Altogether...Spurs are on their way to Wembley
"When you start hanging out in LA with Scientologists you need to question yourself. Is he a footballer or just Posh's husband?"
Tom Clarke from The Enemy gives his views on David Beckham.

"I've been to Cardiff a few times but I'd love to get to Wembley. My son is six or seven years old and I'd love to take him to Wembley to watch Liverpool."
Jamie Carragher on his ambition to play for Liverpool at Wembley. Wouldn't hurt to learn your son's age, Jamie!
(Huw, Wales).

"It was a mistake of mine to tell the lads that this lot don't score too many goals - and statistically they don't - but then they go and score seven."
Colchester United boss Aidy Boothroyd wishes he'd never given that pre-match team talk as Preston won 7-0.
(Francis Kyan, England).

"This won't affect our goal difference, will it?"
Colchester fan to her husband as the seventh goal went in during the FA Cup tie.
(David, England).

Commentator: "See if you can spot Rio Ferdinand in the crowd, Jimmy". Jimmy Armfield: "Why, is there a prize?"
Banter during Man Utd-Aston Villa.
(Martin C, UK).

"I suppose it is a bit of a date that we're having at the moment. As is usually the case you don't get married on a first date, you've got to go out a few times before you make any big decisions."
Colchester boss Aidy Boothroyd on Nolberto Solano having trials with the club.
(Kane Rennie, Sydney).

"When everything is going wrong, it seems like nothing goes right."
Gary Speed on MOTD2, regarding Liverpool's current predicament.
(Wanday Ramo, UK). 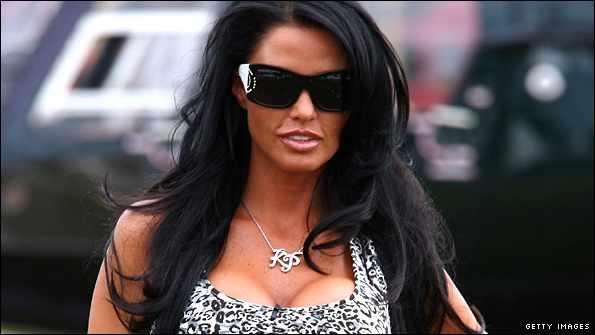 "Gareth Southgate was sacked for being almost second in the Championship."
Danny Mills on 5 live. Almost second...so you mean third then, Danny?
(Ian Greig, UK).

"The Derby fans are good fans, they turn up week-in week-out to support their team - they even turned out to watch the rubbish they played under you, Paul!"
Paul Merson talking to Paul Jewell on Soccer Saturday.
(Christopher Cashin, England).

"In 1995 I enjoyed the Christmas party as a player. But I was shocked whenever I went to one. Why? I was shocked because you don't expect to go out and not have a meal."
Wigan boss Roberto Martinez on footballers' Christmas parties.
(Anthony Ko, UK).

"(Claire Taylor) is the first female woman to be one of Wisden's Cricketers of the Year."
From the Daily Telegraph website - have they had some male women then?
(Charlie)

"Roy Keane's like a shark. He has those eyes. You don't know if he is going to buy you a drink or eat you."
Ian Holloway on the Ipswich manager.
(Anthony Ko, UK).

"Well, John, that game must have had you pulling your hair out..."
Journalist to Raith Rovers manager John McGlynn, who's bald.
(Robbie Weir) 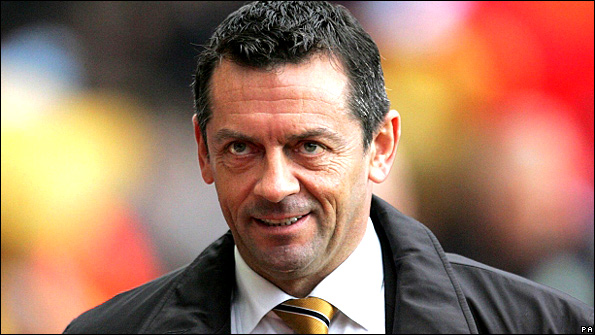 You know when you've been Tangoed
"You're seeing Cesc in a minute."
Arsenal fans to Brown and his assistant Brian Horton following last year's spitting controversy.
(Tim, London).

"We can't see you sneaking out!"
Colchester United fans to their Southampton counterparts when thick fog descended.
(Aaron Finch, England).

"Is there a fire drill?"
Arsenal fans to their Portsmouth counterparts after scoring their third goal at Fratton Park, which saw the home fans start to stream from the ground.
(Kenny Lomas, England).
Isn't that the chant normally directed towards the Gooners at The Emirates? Ed.

"You're not fit to referee!"
Nottingham Forest to referee Mark Clattenburg after a dubious decision during the Coventry game.

"You're not fit to referee!"
Coventry fans to Clattenburg 30 seconds later after they claimed to be the victims of an equally poor decision.

Forest and Coventry fans together: "You're not fit to referee!"
(Gary Wallis, England).

"You should have kept Jim Magilton!"
Ipswich Town fans to QPR during the 3-0 victory at Portman Road. A hint of sarcasm in there, perhaps?
(Lesley Smith, Ipswich).

"If you need a blanket you're a wimp."

"If you want a blanket, clap your hands!"
Fulham fans in Basel when blankets were given out to the home supporters.
(Pat).

"If you are parked in the Buttermarket car park....it closes at five....oh and by the way my mother-in-law is cooking jacket potato and cold meat tonight."
Ipswich announcer at QPR game.
(Stephen Bailey, Ipswich).

QUOTES OF THE DECADE WE MISSED

"I wouldn't even sell them a virus."
Sir Alex Ferguson on the Ronaldo/Real Madrid transfer saga.
(Shrinidhi, India). 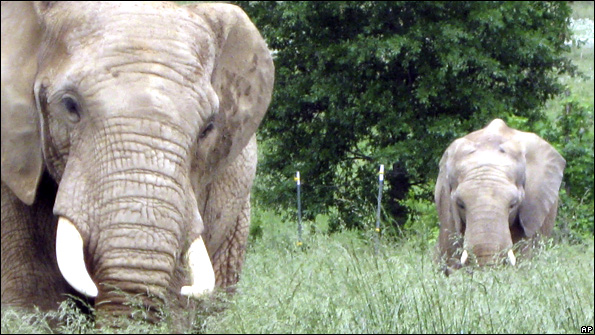 It's all relative
"The ball came over mine and Colin Calderwood's head, and who should be at the back post? None other than yours truly, Alan Shearer."
Colin Hendry after England's victory over Scotland in Euro '96.
(Mike Mercer, England). Four years' short, but well worth bending the rules for! Ed.

"Statistics are like mini-skirts .. they give you good ideas but hide the most important parts."
Aberdeen manager Ebbe Skovdahl in 2001 when hearing that Arild Stavrum had more shots on target than Henrik Larsson.
(Mike Teevan, UK).

Reporter: "Gordon, can we have a quick word please?"
Gordon Strachan: "Velocity" (walks off).
(soul_ire) nb: urbanfox claimed this was originally said by former Man Utd captain Martin Buchan in the 70s - Ed.
"When he (Claus Lundekvam) was carried off at Leicester someone asked me if he was unconscious, but I didn't have a clue. He's always like that....."
Strachan again.

Reporter to Shola Ameobi: "Does Bobby Robson have any nicknames for you?"
Ameobi: "Yes, Carl Cort."
(antpatrickson23 and Bryan, Gt Manchester)

"That's what children do - throw food. That's not fighting. We were real men. We'd have chinned them."
George Best on the infamous Battle of the Buffet between Manchester United and Arsenal players.
(The_Dark_Blue_King)

"It is like having a blanket that is too small for the bed. You pull the blanket up to keep your chest warm and your feet stick out. I cannot buy a bigger blanket because the supermarket is closed. But I am content because the blanket is cashmere. It is no ordinary blanket."
Jose Mourinho in his Chelsea days.
(Robbo 277)