As you may have noticed, the Quotes of the Week format has been tweaked to incorporate it into this blog. The idea is that you add any decent quotes/chants/banners/announcements you may have seen or heard and the best ones will be highlighted in next week's.

Anyone who is not signed up to post on blogs can continue to use the old post-form email system for the next couple of weeks but after that we'll just be taking comments on the blog. So without further ado, here's Frank Lampard to kick us off....

"With and without the ball at the moment we're very on the ball."
Frank Lampard has a ball after Chelsea's thumping of Bolton. .

"Yeah, next week's game is important. If we lose next week we could be relegated so it's going to be a desperate week."
Spurs boss Harry Redknapp with just a hint of sarcasm when asked on Match of the Day whether next Saturday's game against Sunderland was important.

"Scintillating? No, I'd call it a nuclear explosion."
Juventus goalkeeper Gianluigi Buffon after his team blasted Sampdoria 5-1.

"He's definitely a plonker, but in the nicest possible way."
Sheffield Wednesday keeper Lee Grant on team-mate Luke Varney, who scored the equaliser against Bristol City. 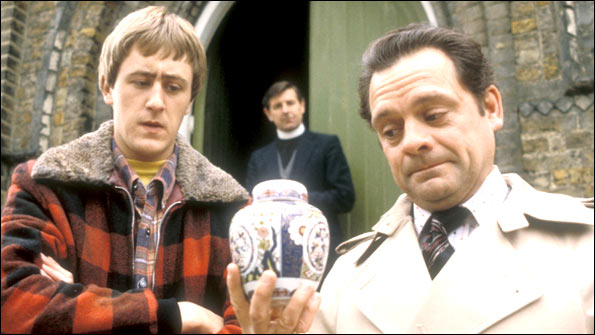 Two characters who know all about plonkers
"I know very well what I have to do if I have the flu. It's not a medical
prescription. It's my grandmother's prescription - hot milk. Alcohol - red wine. Fantastic."
Carlo Ancelotti has the perfect antidote for swine flu.

"We've all got Abba songs in our heads after all."
England coach Fabio Capello is a big fan of the Mamma Mia musical.

"When the FA moved from Soho Square, it was like having the whole family back in the one house, but the first time I set foot in here, I took an eternity to find the way out. Ray Clemence and I were going up and down, up and down, never finding the right floor."
But the Italian met his Waterloo when trying to get out of Wembley Stadium.

"Players run from three miles away and then just stand chin to chin. I don't understand it. If you're going to run that distance, you might as well throw haymakers!"
Yeovil boss Terry Skiverton after a bit of handbags following the 4-0 defeat by Leeds.

"I thought he might miss the penalty because you know what some Scots are like - a bit tight!"
MK Dons captain Dean Lewington after Peter Leven scored a penalty in the win against Bristol Rovers. The League One side are donating money to the forces' charity Help For Heroes for every goal they score.

My secret is adapting to the country I am in. Here I eat roast beef and Yorkshire pudding. There are people who visit different countries and don't adapt. It is a must."
Arsene Wenger is fitting in nicely with the culture of Les Rosbifs.

"Jermaine is really generous - he bought me some Christian Louboutin shoes for Christmas which I love. But the best present he ever got is priceless - a tattoo of my face on his forearm."
Jermaine Jenas' fiancee reveals the price of true love.

"I talk rubbish every day - that's probably why I'm captain."
Kilmarnock skipper Kevin Kyle on the secret of good captaincy.

"I think the players are one million per cent behind me."
Phil Brown is turning into Kevin Keegan. 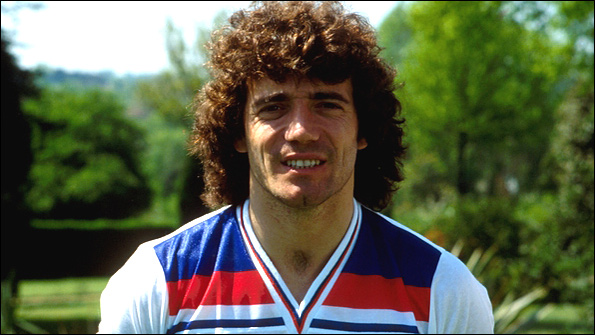 Is he Browny in disguise?
"We were getting to to the stage where we were thinking, we don't even get
them in training now!"
Wolves striker Kevin Doyle on his side's struggle to win penalty decisions in the top flight.

"I'm on the moon."
Golfer Michael Jonzon takes an old cliche and raises it one after winning the Castello Masters.

"The fact we didn't play for three months during the summer was a massive help."
Nottingham Forest defender Luke Chambers when asked what the secret to Forest's seven-month unbeaten away record was.
(Jon Ball, Stoke-on-Trent).

"The one difference between Lennon and Bentley is that they're completely different players."
Heard during the Spurs-Everton Carling Cup coverage on 5 Live.
(Jon Allsop, England).

"He's so right-sided, me and my friends call him the 'Anti-Giggs'."
Liverpool fan on 606 describing Ryan Babel.
(Waheed Seria, Surrey).

"The car was fantastic, it worked brilliantly on both tyres."
Sebastian Vettel after winning the Abu Dhabi GP on two fewer tyres than his rivals, apparently!
(David Howell, Essex).

"Van Persie has shown us that he uses his right foot only to enter a tram rather than play football with it."
BHT's (Bosnian national TV) Zoran Šuko during the Spurs-Arsenal game. Five minutes later Van Persie scored the first of his two goals, both with his right foot!
(Andrea Grozdani, Bosnia & Herzegovina).

It will be pitch black during tomorrow's race, apart from the floodlights.
F1 presenter Jake Humphrey on Abu Dhabi's night race!
(Paul, England).

"A return to Juventus? You can never say never, in football anything can happen."
(Tam, Buenos Aires).

"I threw my jacket down because I was frustrated. I couldn't communicate with the players because of the noise of the stadium - I am not used to that!"
Arsene Wenger on the noise in the 'library'.
(Clive, UK). 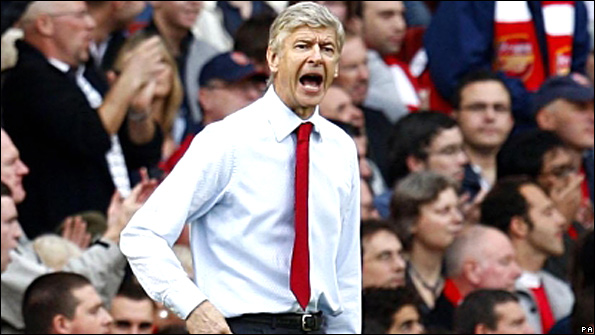 Wenger gets shirty at The Emirates
"It kind of handles like a pregnant elephant."
Sir Jackie Stewart on F1 cars with full fuel tanks. I know Sir Jackie is a good driver, but I never realised he could drive animals!
(Luke, England).

"You only get those goals on a computer game."
Paul Merson after Arsenal almost score a perfect box-to-box goal in their Carling Cup clash with Liverpool.
(Waheed Seria, Surrey).

"Hartson believes Celtic must recruit a forward to compliment McDonald."
On BBC Sport website picture caption. What exactly does he want to be complimented on? His hair? Dress sense?
(John, Scotland).

"There's no such thing as a bad penalty."
Commentator during the Hearts-Celtic game. Try telling that to David Beckham.
(Thom Williams, UK). 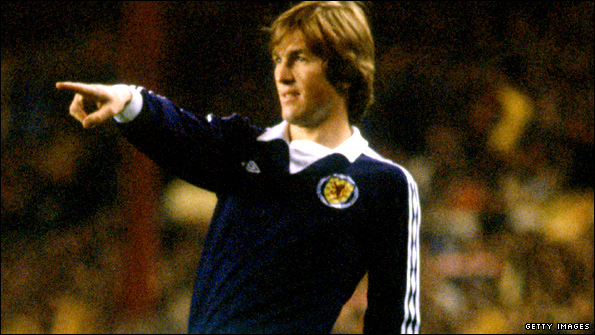 Are you going to tell him he's English or am I?
"They now need a meat and potatoes powerplay."
Kevin Weekes on US TV during the Minnesota-Chicago NHL game
(Jack Gulston, England).

"Summing up that response was his England team-mate Robert Green who produced a stunning match-winning save at the death to save a point."
West Ham's official website. Apparently, match-winning saves are only enough for a point.
(Ricky Galer, England).

"Bent and Kenwynne Jones.........they got a thing going on."
To the tune of Me and Mrs Jones. Sung at the Birmingham-Sunderland match.
(Phillip O'Brien, Birmingham).

"You're just a small town in Blackburn!"
Heard at Bristol Rovers vs Leeds. According to Rovers fans, Blackburn are near-neighbours of Leeds...if neighbours means being in a different county and 50 miles away!
(Dave P, England).

"You only came for the T-shirts."
QPR fans to Derby on a night when every Rams fan was given a free commemorative shirt.
(Gerard Walsh, England).

"5-2 and we've got the flu!"
Blackburn fans at the Peterborough game. Three players had been diagnosed with swine flu.
(Rob of the Robots, England).

"You're just a small town with swine flu!"
Peterborough fans have their say.
(Johnny Evo, Huntingdon).

"We don't need a beachball!"
Heard at Peterborough-Scunthorpe to referee Mike Jones, who infamously allowed the 'beachball' goal for Sunderland against Liverpool. (Matt Evetts, England). 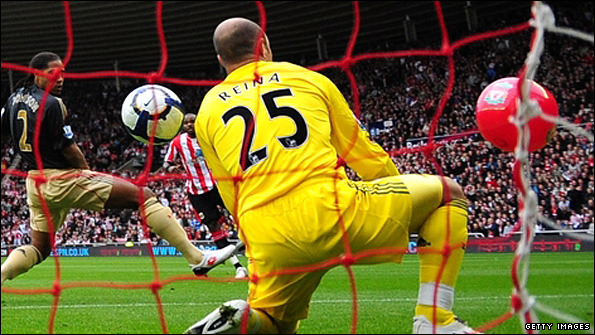 You won't find any of these down at London Road
"One Tong, we've only got one Tong!"
FC United fans sing centre-half Adam Tong's name after his unfortunate own goal against Northwich Victoria in the FA Cup on Saturday.
(Colm Lambert, UK).

"We're your biggest fans, we'll follow you around the country, Lionel, Lionel Ainsworth."
Sung to Huddersfield winger Lionel Ainsworth (to the tune of Paparazzi by Lady Gaga).
(John McNamara, England).

"Boom Boom Boom, let me hear you say Barrow... BARROW!"
To the tune of the Outhere Brothers song, as sung by Barrow fans away at Chester.
(Matt, England).

And at Swine Flu stadium, it is Blackburn 2, Peterborough 1.
Stadium announcer at Bristol Rovers reading the half-time scores.
(George U, Bristol).

NON-STADIUM ANNOUNCEMENT OF THE WEEK

"The exit barriers are open, so if you have an Oyster card, make sure you touch out. If you have a ticket then never mind and if you did not buy a ticket then you have a result."
Stanmore tube station announcer helping the mass of people exiting Wembley following Sunday's NFL Patriots victory.
(Ken, England).

BANNER OF THE WEEK

"You told us to come back when we'd won 18 titles...well, we're back."
Banner from Manchester United supporters seen at Anfield. (Bledi, UK).

T-SHIRT OF THE WEEK

"See you in the Championship next year."
Spotted on the back of a Saints top during the Great South Run - a 10-mile course through the city of Portsmouth.
(Mark Hopkins, England).

HEADLINE OF THE WEEK