Arsene Wenger's amusing antics have dominated this blog for the past fortnight and Sir Alex Ferguson has clearly had enough.

The Manchester United boss was bang on the money this week - as he played up to his audience with a spring in his step and a twinkle in his eye.

Stoke fans were the first on the hit-list after the Britannia faithful's cheeky chant of: "Fergie, Fergie what's the time?" (A reference to the seven added minutes in the Manchester derby for all those who've been on Mars).

Quick as a flash, Sir Alex leaned forward and gleefully showed them his watch, much to the amusement of his cronies in the dugout. I guess that's what they mean by comic timing. 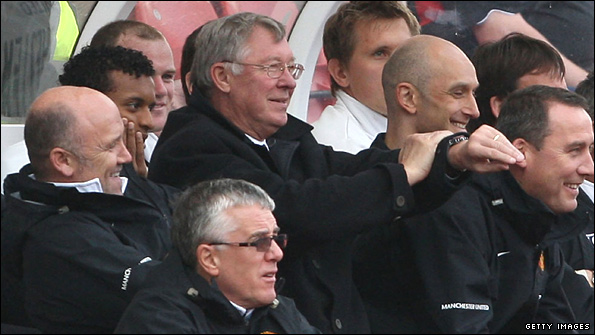 It's three points time!
Next stop on the comedy roadshow was Old Trafford and the pre-match Champions League press conference. Sitting alongside defender Jonny Evans, Fergie was extolling the virtues of marriage for footballers and suggested Evans might like to think about it.

The squirming 21-year-old looked down at the assembled hacks and coyly said: "I don't really want to talk about that here - especially because my girlfriend's in the middle of you all - she's on placement at ITV this week!"

Unperturbed, Ferguson turned to the lady in question, Kate Wathall, and said: "Get him tied down, dear - rings are cheap now!" - leaving poor Evans looking like a teenager who's just been spotted by his mates out shopping with his mum.

Kate admitted finding the whole experience quite amusing and confessed she hadn't told her university chums she was dating a footballer, adding: "Well they all know now, I guess!" Yep, I'd say so, Kate.

Fergie also found time (he can always get a few minutes from somewhere) to heap praise on old boy Cristiano Ronaldo, who has been banging in the goals for Real Madrid. The United chief said: "He has done well to get seven goals right away. He was a great bet, 7-1 to be the top scorer (in La Liga). Did I take it? Absolutely!"

Meanwhile, Ryan Giggs continued to plug the gaping hole left by Ronaldo's departure. The oldest winger in town scored his 150th goal for United in the 2-1 defeat of Wolfsburg, with Michael Carrick (remember him?) bagging the winner. The Mirror summed it all up with the headline 'Carrick Keeps The Wolf From The Draw'. Genius.

Things weren't quite so rosy for Liverpool, who crashed 2-0 to Fiorentina under the watchful gaze of Sting. Teenager Stefan Jovetic did the damage for the Italians by scoring both goals in a sublime all-round performance. In fact, every little thing he did was magic.

Elsewhere, Arsenal finally found a way past Antonis Nikopolidis to beat Olympiakos 2-0. The Greek goalkeeper - hero of their European Championship win - made a string of fine stops, despite looking like he'd just been wheeled out of an old peoples' home. Never mind Portugal 2004, you could use a bit of Grecian 2000 old son.

Chelsea returned to winning ways by sneaking a 1-0 in Nicosia, much to the relief of coach Carlo Ancelotti. After the defeat by Wigan, Ancelotti was raving, talking Italian (he always reverts to his native tongue when he's narked off) and Petr Cech's silly red card would not have improved his mood. The Sun marked the occasion by digging out their old Star Trek pictures of Mr Chekov. Nice. 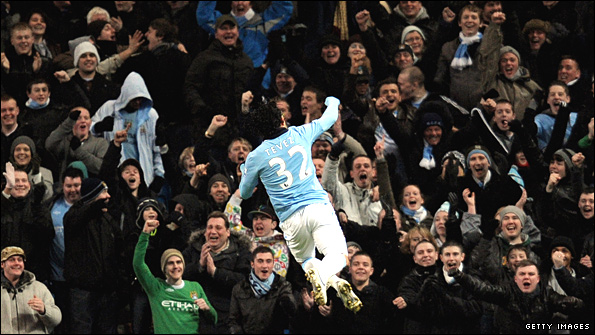 Tevez salutes the Hammers fans
Manchester City also bounced back from the derby blues by seeing off West Ham in the Premier League. Carlos Tevez opened the scoring and staked his claim to being the nicest footballer ever by immediately saying sorry to the fans of his former club. He'll never need to buy a plate of pie 'n' mash again.

Meanwhile, muggins here was up in Newcastle to see QPR turn in an impressive display at St James' Park. As any away fans who've been there recently will testify, the hike up to the top of the Sir John Hall Stand makes Mount Everest look like Henman Hill and there were a few people looking like rabbits in the floodlights by the time they finally made it to the summit.

I went up with my mate Geordie Davy, who took me on a tour of the Toon after the game. I have to say the city is fantastic and the locals most welcoming - although it's true that everyone dresses in mini skirts and crop tops. And the women don't wear much either.

While I was there I sampled the local cuisine - stotties, black pudding and cod from the Tyne (all mine, all mine) and learned that Alan Shearer had been appointed a Deputy Lieutenant of Northumberland (bit of a step down from The Messiah).

One group I didn't see on the return journey were the four boys who'd cracked open a case of beer at 10am on the way up and comfortably worked their way through it by the time we hit Newcastle three hours later, before turning their attention to the nearest boozer.

Maybe they had been struck by Wenger's words of wisdom that "there is no better psychological education than growing up in a pub". It can also be the provider of a spiritual awakening - I bet at least one of the quartet found himself speaking to God on the big white telephone sometime that afternoon.

QPR visit Swansea on Saturday and I had a very kind offer from my mate Welsh Pete to crash at his gaff if I wanted to come down for the game. Of course I'd like nothing more, but having done three games in the space of seven days, I've got about as much chance of being excused childcare duties for the weekend as Boris Johnson has of propping up the bar with Peggy Mitchell in the Queen Vic. Oh, hang on a second...

While Newcastle was arguably the best away trip ever, the same cannot be said of Burnley fan Jason Taylor's forthcoming visit to Blackburn. The 28-year-old lives a stone's throw from Ewood Park but is being forced to do a 50-mile round-trip after all Clarets fans were told to report to Turf Moor before travelling to the game.

Jason will then have to return to Burnley after the match, before heading back to Blackburn. He said: "I'll be getting up at 7.30am for a game four minutes away and spend the day in the car, the coach and on the motorway." And possibly the doghouse if his other half had plans for that evening.

Tickets please!
In other news, Ade Akinbiyi signed for Notts County (possibly not what the fans were thinking of when they were promised a 'big name') and according to Sheffield United's Chris Morgan, team-mate Glen Little is the spit of Blakey from On The Buses. Little came on as a sub just after Tom Butler had put Swansea ahead on Saturday, no doubt introducing himself with the words: "I'll get you, Butler!"

Non-football story of the week was sent in by Ian Pashley and involves a racehorse called Transvestite. Apparently the commentator in Coral's bookmakers observed: "Coming to the final fence and Transvestite is looking for a change of gear."

And finally, fingers crossed for Wayne and Colleen on the imminent birth of their first child. Rooney has promised to be at the hospital, regardless of whether Manchester United have got a game - and having experienced first-hand the gamut of emotions experienced by a woman in labour, all I'll say is good luck.

According to Rooney's mate Kelly Jones from The Stereophonics: "Wayne keeps telling me how he's playing the album over and over. I'm pretty sure it's all he ever listens to." And the title of that album...Keep Calm And Carry On