He might be a dab hand with the Lottery numbers, but even Derren Brown would have struggled to predict events of the past few days.

A 92-year-old woman at the top of the album charts, Patrick Swayze and Keith Floyd leaving us on the same day and Nicklas Bendtner scoring a corker.

At the centre of it all was one Sheyi Emmanuel Adebayor (not sure why he dropped the first name - as acronyms go it's hardly in the same league as US philosopher Norman O. Brown).

To be involved in one controversial incident is a little daft, but two is really taking the biscuit, the bottle, the stool and the numerous other objects that were hurled towards him as the Manchester City striker celebrated his goal in front of the incensed Arsenal fans. 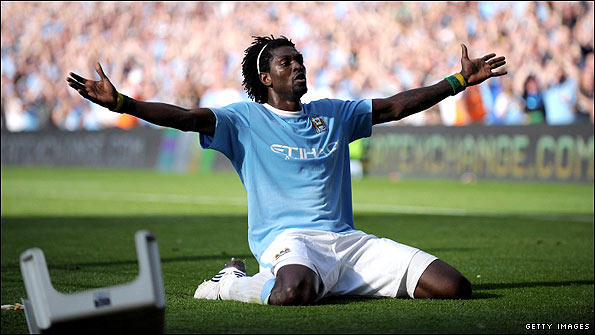 Adebayor is not the Messiah, he's a very naughty boy

Then there was the Van Persie stamp and the subsequent charge of improper conduct which was "reluctantly accepted" by City.

But while events at the City of Manchester Stadium were a little unsavoury, at least they brought the best out of our old mucker Arsene Wenger, who appears hell-bent on wresting the rent-a-quote crown from Ian Holloway. (Ollie, incidentally, was on sparkling form after Blackpool's defeat of Newcastle, stating that he wanted to snog the Seasiders' resident drummer "even though he probably wouldn't like it much".)

One minute Wenger was tearing a strip off his opposite number for defending Adebayor - "You ask 100 people, 99 will say it's very bad and the 100th will be Mark Hughes" - the next he was quoting the Bible, following van Persie's decision to castigate his tormentor in public.

"If somebody stamps on your head in that way, you wouldn't say, 'thank you very much' and turn the other cheek," reasoned Wenger. "Only Jesus Christ did that."

As for Adebayor (altogether now) - he's not the Messiah, he's a very naughty boy.

Arsene was at least able to afford himself a smile following Arsenal's impressive Champions League win over Standard Liege, especially with Eduardo scoring the winner after having his diving ban rescinded by Uefa.

According to the Gunners boss, the case for the defence was aided by the evidence of 'forensic experts'. Is it just me or did anyone else picture a line of policemen painstakingly combing The Emirates, with men in white coats busily dusting the striker's ankle for stud prints?

To put the cherry on the cake, Wenger used yet another of his made-up words when he dropped 'footballistically' into a conversation about the poor facilities for youngsters in Brazil (you'll remember he already has previous for 'playerish' and 'Old Traffordish').

Don't be surprised if some or all of these phrases become common parlance over the coming years. Ron Atkinson's 'early doors' has been accepted as the norm (even though it makes no sense whatsoever), while only the other day I happened to walk into the front room when Corrie was on to hear Peter Barlow (he's one of the characters apparently) utter the legend 'bouncebackability'. Iain Dowie, take a bow son.

As for Wenger, when he finally hangs up his magic specs (guaranteed to make you miss all your team's controversial incidents) a career in stand-up surely beckons.

There could be a vacancy at Loftus Road's very own Comedy Club if Jim Magilton doesn't get his act together soon - 15 weeks is like a lifetime in the QPR hotseat. Of course in the unlikely event that Flavio Briatore is not deemed to be a 'fit and proper person' to run a football club in the wake of 'Crashgate', he may not even get the opportunity to fire boss number three (or is it four)?

Mind you, according to F1 supremo and QPR co-owner Bernie Ecclestone: "Sometimes good things come out of bad. At least (Flavio) will have more time to pick the team now." Yikes.

My eminent colleague Goughie, who has the misfortune to sit next to me in the office, remarked five minutes before the Briatore story broke that it had been a slow news day. It was swiftly followed by the announcement that Peter Kenyon was stepping down from his role at Chelsea and Karren Brady was leaving Birmingham. I haven't heard a peep from him since.

Meanwhile, Scotland had some news about the departure of George Burley's assistant by announcing: "Ladies and gentlemen, Steven Pressley has left the building." At least that's how they should have worded it.

Pressley's former club Rangers got off to a good start in the Champions League with a 1-1 draw in Stuttgart, while there were wins by the odd goal for all the English representatives.

The biggest talking point was Wayne Rooney's act of petulance after being substituted in Manchester United's game with Besiktas. 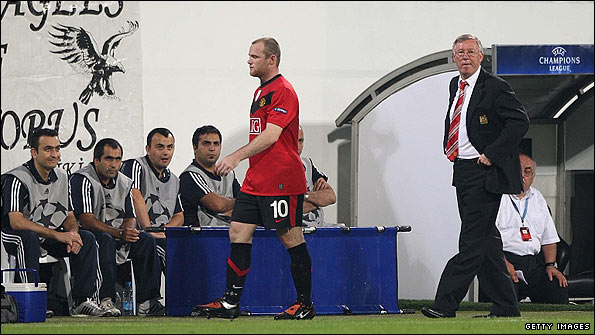 The striker hurled down his boot in a fit of pique but Sir Alex Ferguson dismissed the incident as something and nothing. Fair enough, the only damage done was to the boot as it hit the concrete - it could have been worse and cut someone's eyebrow, eh Sir Alex?

Rooney's wife is due to give birth to their first child next month and if it takes after Daddy she'd be advised not to put any toys in the pram when she goes out for a stroll along a busy street.

In the meantime there's the small matter of the Manchester derby this weekend. United were apparently moaning that Adebayor should be banned from playing (funny that) and ultimately got their wish, but Pat Rice Evra is hoping his old buddy Carlos Tevez is fit.

"I have been joking with him about the reception he will get," said Pat,. "I don't know if the fans will boo him or clap him... but if they boo him, I will join in!" Ooh, he's a one.

Former United star Beckham got a boost to his chances of making it on the plane to South Africa, when the boss revealed his other half had taken a bit of a shine to the former captain.

Fabio Capello told Marie Claire magazine: "My wife has never told me who her favourite player is but she did have two pictures taken with Beckham a while ago!" So now we know who really called for the restrictions on WAGs at the World Cup.

Capello also declared his passion for the English way of life, an opinion shared by countryman Carlo Ancelotti, who spoke of his love for bacon and eggs, The Beatles and Phil Collins. Well, two out of three ain't bad.

And finally, story of the week involved Dimitar Berbatov who revealed he had to exorcise a few demons before he made the switch to Old Trafford - or rather his uncle did.

The Bulgarian said in The Sun: "He is a priest and exorcist back home - a powerful man who drives out demons and bad spirits. When I moved to United he had a problem with their nickname. As a Godly man he does not like the Red Devils."

And for his next trick, Uncle Berby is going to summon up all his powers to help his nephew locate the back of the net again. But don't hold your breath.