Manchester United may have finally celebrated their 18th, but it was Rafa Benitez who was claiming the keys to the door.

The Liverpool manager greeted United's title triumph with all the enthusiasm of a jilted boyfriend who's unexpectedly bumped into his ex and her handsome new beau.

He pointedly refused to congratulate Sir Alex Ferguson, saying: "I prefer just to say well done to Manchester United. Normally you have to be polite and to respect the other manager. But during the season we have seen a lot of things I don't like." Ouch. 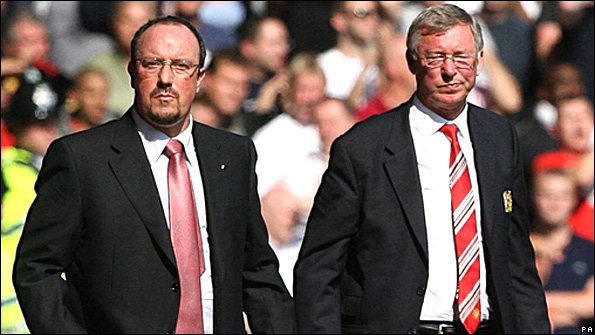 In which case, could Liverpool kindly do the decent thing and hand back their 1976 league title, which morally belongs to QPR? Not that I'm bitter, you understand.

But forget all this talk of Benitez being a party pooper, let's celebrate his fierce rivalry with Fergie, which has witnessed more ding-dongs than an Avon lady with superglue on her finger. With Arsene Wenger and Sir Alex suddenly behaving like long-lost sweethearts, it needed somebody to put a cat amongst the fiery knight's pigeons and Rafa has pulled a sabre-toothed tiger out of the bag this season.

Wenger committed his future to Arsenal, but only after getting a few things off his chest. The Frenchman claimed the flak he has been getting after another potless year made him feel "like you killed somebody". A little extreme perhaps, although I know a few Gooners who could murder a trophy right now.

Arsene has always been known as a shrewd operator, but you'd have to question his judgement when asked to comment on the Nicklas Bendtner 'trouser-gate' incident from a couple of weeks back.

"I was angry but he has been set up," Wenger claimed. "People make the story that he was drunk - he was not drunk. He did not pull his trousers down, somebody did it for him and somebody was posted there with a camera." Which begs the question, why didn't he pull them up again before he got to his car?

Meanwhile, back in Manchester, there are fresh cracks appearing in Cristiano Ronaldo's relationship with Sir Alex Ferguson - or 'Ronson' to give them their Hollywood name.
It's like deja vu all over again, with Ronaldo declaring his undying love for United one minute, while refusing to rule out a move to Real Madrid the next.

Following the shirt-throwing incident against Man City, Ronaldo and his manager chose to wash their dirty laundry in public at the JJB Stadium - with Fergie doing an impression of a traffic cop on acid, while his protege assumed the role of moody teenager. (To paraphrase Ringo Starr, all Ron's gotta do is act naturally.)

Now that the Premier League is in the bag and the Champions League final on the horizon, the two of them appear to be all sweetness and light once more, but come the summer you just know the shenanigans will predictably start up again - Ronson, it does what it says on the tin.

Everyone was on their best behaviour last weekend when a very special visitor dropped in at Old Trafford, in the shape of triple Olympic champion Usain Bolt.

The Jamaican, a (very) big United fan, came to impart some of his advice to the players, informing us Ronaldo was not a diver but simply "tipped over a bit" when reaching top speed. Nearly as amusing as Jordan and Peter's plea to the press to "respect our families' privacy at this difficult time". 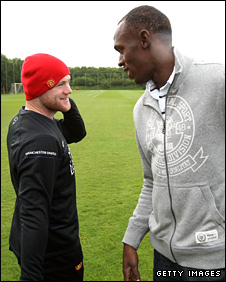 The funniest sight was the picture of Bolt greeting Wayne Rooney - now we know how the Lilliputians felt when Gulliver came-a-calling.

United play Hull in their final league game of the season and with rumours persisting that Ferguson will be sending the under-13 girls team and a couple of tea-ladies to the KC, the north-east triumvirate are like a group of builders following instructions to block up a tunnel - bricking it.

Boro fans know their hopes of survival are vainer than Warren Beatty and never mind squeaky, it's streaky-bum time for Newcastle as they enter the last-chance saloon looking firm favourites for the drop.

The players have been making all the right noises about Alan Shearer's management style, with Steven Taylor revealing the Big Brother approach that has everyone looking over their shoulders: "He knows people throughout the city and will find out everything. Now if I go into a restaurant I'm thinking 'He knows what I'm eating - will I order chips or not?'"

One thing the players might be encouraged to do by Shearer this week is drop litter around the Toon - safe in the knowledge team-mate Joey Barton will be around to pick it up soon afterwards.

Quote of the week came from Arsenal striker Andrey Arshavin, who was given the opportunity by the Daily Mail's Martin Samuel to put the record straight over previous comments slating women drivers.The Russian agreed it was wrong - he clearly hadn't gone far enough.

"I would never give driving lessons to women," he declared. We need to build new roads for them. Why? Because you never know what to expect from a woman on the road. If you see a car behaving weirdly, swerving and doing strange things, before you see the driver, you know it is a woman. It is always a woman."

Meanwhile, best feel-good tale concerned FC United - the splinter club set up in protest at the Glazers' takeover of Man Utd - who are inviting supporters to set their own price for season-tickets.

Board member Jules Spencer said: "We believe this is unprecedented in football - a club saying pay what you can afford. It's about recognising some may not be able to afford last season's prices but others will be able to afford more. Some may question whether we're being foolhardy, but why shouldn't we be trust our supporters?"

A worthy idea and one that should be adopted across the football leagues - pay what you think your team's worth. My cheque for £1.99 is winging its way to Flavio Briatore as we speak.

And finally, Chelsea fans still enraged over the injustice of their Champions league exit at the hands of Tom Henning Ovrebo, launched an internet campaign ahead of the Eurovision Song Contest to ensure the referee's native Norway would not win. Well that worked, didn't it?