As Sports Personality turned into a real Hoy of the Rovers story, it was Rover and Out for Paul Ince.

It was bad enough hearing the Wigan faithful singing "You're getting sacked in the morning!" (right chant, wrong day) but when his own fans joined in, Ince must have felt like the hapless Guv'nor in Prisoner Cell Block H during one of those canteen riots. Only this time there was no Bea Smith to bail him out.

As John Lennon once opined, there's 4,000 holes in Blackburn, Lancashire - Incey has disappeared down one, but rest assured he'll pop up again before the season's out.

At the start of the campaign, all the talk was of Fergie's old boys taking the Premier League by storm. Four months on, and in the words of the room-service waiter who found George Best sprawled on a bed with Miss World and a shedload of cash - where did it all go wrong?

Keano and Ince have already gone and it's a fair bet the Man City powerbrokers might think twice about trusting Mark Hughes with the GDP of a small country in the January sales if they spend Christmas in the relegation zone.

And although Steve Bruce appears to have steadied the ship at Wigan, it's no coincidence that he's suddenly stopped having those tasteful highlights in his hair - a sure sign that things have been going Pete Tong. 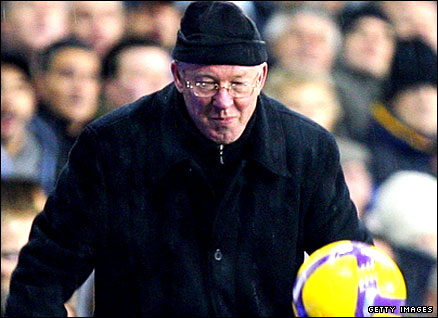 While his former pupils are being put throught the mill, the old master appears as relaxed as he's ever been. On the weekend that Nora Batty sadly passed away, Sir Alex turned up at White Hart Lane wearing one of Compo's old hats - and when the Spurs fans gave him a gentle ribbing, the United boss simply took it off and gave a theatrical bow.

Fergie didn't even seem that concerned at failing to beat Tottenham, although he was probably stunned into silence after witnessing the second coming of Heurelho Gomes in north London.

Even Spurs boss Harry Redknapp could not quite believe the tranformation of the Brazilian, saying: "We went to Holland a couple of weeks ago and I met the goalkeeping coach at PSV. He said 'Don't worry about the goalkeeper, he is world class'. I've got to be honest, I wasn't sure if he had been drinking. I just smiled politely and said 'I'm sure he is'."

Tottenham old boy Robbie Keane looked like he'd lost a shilling and found sixpence (you can't beat your Grandad's sayings) after spending the entire 90 minutes on the bench at Anfield. But if Keano was hacked off, spare a thought for punters flocking to a pub in the blue end of Liverpool, where the landlord has enterprisingly renamed Happy Hour 'Keane Hour - it never lasts beyond 60 minutes'. Must have been an expensive afternoon.

From happy hour to Happy Days, and the news that Sunderland players have nicknamed caretaker boss Ricky Sbragia 'Al' after the diner-owner in the 50s-based sitcom. Sbragia is also known as 'The Wig' because the Black Cats stars are convinced he wears a toupee - and he may yet have the rug pulled from under him if Graeme Souness gets his act together.

Heart-warming story of the week came in the Chesterfield-Droylsden FA Cup-tie (part III), where the Spireites allowed their opponents to walk the ball into the net after scoring a goal from a throw-in which should have been returned to the non-leaguers. Liverpool also sportingly allowed Hull to do the same on Saturday - twice. 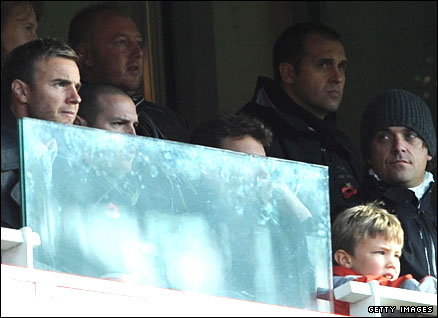 Comebacks were the order of the day, with Sam Allardyce ending his exile by heading to Blackburn and Peter Reid making noises about a return to Sunderland, which he later denied.

Blur meanwhile followed the Specials in announcing a raft of tour dates, but the biggest reunion news concerned Robbie Williams' possible return to Take That, on the back of a meeting with Gary Barlow at the Emirates. Shocking news I'm sure you'll agree - isn't Robbie supposed to be a Port Vale fan?

The singer is also rumoured to have a box at Chelsea, whose manager Phil Scolari incredibly made the front page of The Sun, along with Liverpool counterpart Rafa Benitez, after the pair were coincidentally floored by kidney stones, prompting the headline Liverpool 1 Chelsea 3 (the number of stones belonging to each man - keep up at the back).

Headline of the week, though, went to the News of the World, who told how Cristiano Ronaldo had spent £6,000 on Christmas decorations for his mansion, including a 6ft tree in every room, under the banner 'Santa Forward'.

Over in Argentina, scientists have invented a vanishing spray to prevent cheating at free-kicks. The referee marks out 10 yards with the white aerosol and gets the players to stand behind the line, which then disappears a minute later.

Impressive, but not as impressive as the invisible forcefield that popped up at the Britannia Stadium on Saturday to deck John Pantsil. The Fulham defender rubbed noses with Stoke's Ricardo Fuller before crashing to the floor a full two seconds later.

Referee Stuart Atwell, who earlier missed a penalty that was more stonewall than Hadrian's, decided to take no further action, but then he was the guy who awarded the 'ghost' goal at Watford and probably thought we was seeing things again.

And finally, back to poor old Incey. Apparently he had been trying to escape the pressure cooker of the Premier League by chilling out on the PlayStation with his kids - trouble was they only wanted to play football games. Now he's got a bit of time on his hands it wouldn't be a bad idea to get some practice in on Championship Manager