As Barack Obama was elected leader of the free world, Tony Pulis gave a Presidential address of his own.

With Pulis's Abe Lincoln tribute raising the bar, what price Wenger confirming George Bush's theory that "we are getting more and more of our imports from abroad", while William Gallas plays down his Marlboro-Gate incident by insisting: "I didn't inhale"?

Obama's historic victory led to an outbreak of free speech in the Premier League, with that old shrinking violet Roy Keane coming out of his shell to give his damning verdict on TV pundits.

"I was asked by ITV to do the Celtic versus Manchester United game but I've done it once for Sky and never again... I'd rather go to the dentist," he spat. 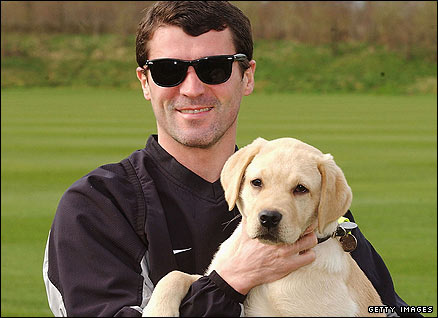 By the sound of it, Keano would like to take a few pundits along with him - to have their mouths sewn up.

The Sunderland manager added: "There are ex-players and ex-referees being given air-time who I wouldn't listen to in a pub... I wouldn't trust them to walk my dog."

The following morning, Sky Sports' Jeff Stelling introduced his Soccer Saturday panel - Phil Thompson, Paul Walsh, Paul Merson and Charlie Nicholas - by saying: "With me today are four pundits you could trust to walk your dog - well, three of them anyway..."

Keane's former boss Sir Alex Ferguson copped an FA charge after striding across the Theatre of Dreams to give referee Mike Dean a piece of his mind, following the 4-3 win over Hull. Fergie said: "I am a bit surprised. But this is the FA. They were probably dying to send me a letter."

Newcastle's Joe Kinnear can also expect a little something in the post from Soho Square after describing Martin Atkinson as a "Mickey Mouse" referee following the Magpies' 2-1 defeat by Fulham. And the chances are it won't be an early Christmas card.

There were enough tales coming out of Manchester United this week to fill at least two columns. A 'club source' told The Sun Fergie had called in a sleep expert telling the players how to find the perfect mattress - under the heading 'He Shoots, He Snores!'

Shame they couldn't have got it sorted a few months earlier following Wayne Rooney's revelation about the night of United's Champions League win.

He said: "Coleen's brother and his girlfriend stayed with us, so when we all went up to bed, I had to stay on the floor. It was a bit weird. We'd just won the Champions League and I was going to sleep on the floor. But I don't think I'd have minded where I got my head down that night."

Old Trafford was also the setting for prank of the week, after Anderson slipped a live mouse down Gary Neville's top in training. He was reportedly said to be fuming, screaming: "Get that thing off me!" - and Red Nev was pretty upset as well.

Review of the week just wouldn't be the same without Harry Redknapp. The man with the midas touch made it 10 points out of 12 since he took over at Spurs - not to mention the Uefa Cup hammering of Dinamo Zagreb.

Striker Roman Pavlyuchneko summed up the gaffer best by saying: "Redknapp is a very colourful person - to be honest, we joke that he looks as if he comes to the stadium straight from the pub!"

Redknapp replied: "Maybe he's not used to seeeing a manager with a smile on his face, but I haven't been to a pub for about 30 years - honest!"

In the FA Cup, we had the familiar heroics from warehouse stackers and hotel porters as Curzon Ashton overcame Exeter, while Histon, best known for the original site of the Chivers jam factory, dumped out Swindon. Fuming Robins boss Maurice Malpas manfully resisted the temptation to say: "They've got more jam than Hartley's!"

Elsewhere, Rory Delap's throws for once proved unproductive as Stoke were held to a 0-0 draw at Wigan. But you couldn't keep the midfielder out of the news. In an interview he said: "I don't look after my arms especially. I'm still in the garden with the kids throwing balls for them." How big is his garden?

And finally, back to the main story of the week - one of Barack Obama's first invites since getting the top job was a trip back to Upton Park to see his 'beloved' West Ham.

Hammers boss Gianfranco Zola, speaking before the latest captitulation to Everton, conceded: "I think he's going to be a bit busy for a while." And if not, I'm sure he'll find something.....

OTHER STUFF
Standard Liege's Dieumerci Mbokani gets stuck on a fairground ride - cue uncontrollable laughter back in the TV studio.

Botafogo's Andre Luis snatches the referee's yellow card and waves it around.