As Joe Cole's girlfriend entered the jungle, Spurs fans must have wished she'd taken Heurelho Gomes with her.

The hapless keeper had them screaming: "He's A Calamity - Get Him Out Of Here!" following his latest blunder at Fulham, which handed Tottenham their first defeat under Harry Redknapp.

'Arry did his best to defend Gomes on Match of the Day, insisting the Brazilian would be man enough to accept the blame. "He'll hold his hands up," said Redknapp, while wondering why he hadn't done that an hour or so earlier.

It's hard not to feel sorry for Gomes, although perhaps it's no coincidence he shares his name with the character from The Addams Family - every time he comes for a cross, it looks like he's seen a ghost. 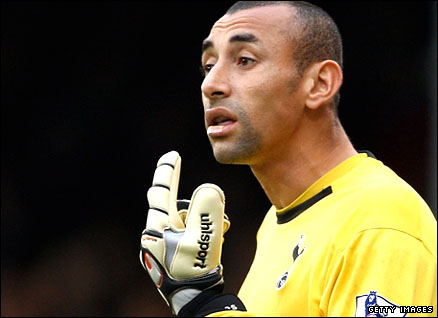 Or as fellow-blogger Robbo put it: "I'm reminded of me Dad trying to get a suitcase off the top of the wardrobe while standing on a swivel chair."

David James is no stranger to goalkeeping howlers, but he seemed to have left most of that behind him until he was spotted cruising around in a Reliant Robin at Fratton Park last week.

Realising the fume-belching three-wheeler (which emits animal noises when the engine is turned on) was doing his eco-friendly image no favours, Jamo explained it was a bit of fun to punish the worst trainer at the club by making them drive it home. Older readers will remember the idea was originally employed by Leeds United when they were in the top flight. Yep, that long ago.

As for poor old Gomes, the only vehicle Spurs are likely to be providing him with is a taxi.

The arrival of the new company car at Portsmouth showed new boss Tony Adams has a wacky sense of humour, although an interview he gave to the Daily Mail was a little off-the-wall to say the least. The reformed alcoholic said: "I don't actually like people. I'm a loner and if I had my way I'd just walk my dogs every day, never talk to anyone and then die."

Which explains my old man's lame excuse for spending so much time in the pub - "I only drink to make other people seem interesting."

In the Carling Cup, Arsenal schoolboys did their homework on Wigan for another impressive demolition job, but the shock of the round came at Stamford Bridge, where Burnley toppled Chelsea.

Blues assistant boss Ray Wilkins won't be lifting the cup, but he picked up the foot-in-mouth award after tearing into the Gunners before the fourth round matches. He said: "Playing a young or weakened team undermines the value of the competition and we have not and will not do that. We want to win it, big time." Oops.

Didier Drogba was the villain of the piece at the Bridge after hurling a coin back into the Burnley faithful. "There are two sides to it," team-mate Frank Lampard stressed afterwards. Yeah we know, Frank - heads and tails.

Fortunately no-one was injured - imagine the carnage if Rory Delap had done something similar. The Stoke chucker came up short against Man Utd at the weekend but was nevertheless immortalised in a fantastic tribute gallery on the Guardian website.

A special mention must also go to the Stoke Sentinel, which belatedly responded to Arsene Wenger's allegations of thuggery by ending each player-rating after the Wigan match with the line 'never tried to injure anyone'.

Another list that caught the eye was found on football blog site Off The Post, which detailed the top 10 conclusions of the Premier League weekend, including the gem: 'Good to see Titus Bramble back to doing what he does best - costing Newcastle points!'

Elsewhere, it was reported that Liverpool's Ryan Babel has a recording studio in his house which he has used to produce a number of rap tunes under the moniker Rio. Sample lyrics include: "I can't even spend all my money - keep your daughter inside or you will be my family." Looks like the Ivor Novello's on hold for another year.

Mind you, if you think that's bad, check out former QPR striker Shabazz Baidoo 'rapping' about cups of tea.

And finally, pun of the week. Thanks to Andrew Watt from Scotland who sent in this beauty: "It's obvious why Joe Kinnear called Martin Atkinson a Mickey Mouse referee - he Disney get the big decisions right." Any more like that, Andrew, and I'll be out of a job.

Serie A: Catania players drop their shorts to unsight the opposition goalkeeper and score from a free-kick.

Brazilian players cuddle up on the plane.