During his glittering 20-year playing career in the highest echelons of European football, Clarence Seedorf has seen some dramatic changes to the game he loves. The legendary AC Milan star predicts there are more on the horizon too.

While Uefa's Financial Fair Play ruling is the current hot topic among the Champions League elite, Seedorf is a believer in the more revolutionary ideas which he says are afoot to reshape the game on this continent.

We are talking about a European Super League, or "an NBA of football" as Seedorf puts it. As he explains, the principle would be for fewer matches each season for the top players, but of higher quality. Crucially - and undoubtedly controversially - it would involve the biggest clubs leaving their domestic leagues to take part.

"It is not an easy thing to do because of who you would have to exclude but I have heard about a project they have already in some kind of box," Seedorf, who has won four Champions League titles with three different clubs, told me. 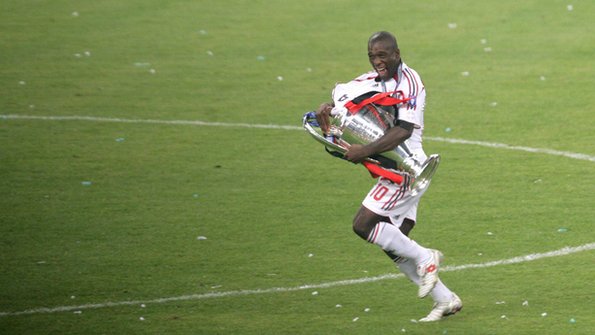 "Evolution will be made for sure," he added. "I believe in a European League. I would like to see more quality in the game and fewer games mean more quality. This is something that has been discussed many times but the future will be something like that."

As Seedorf can testify with some experience, playing for a team which progresses deep into the Champions or Europa Leagues means you play twice a week for most of the season, even before international games come into the equation. The financial demands this schedule puts on fans is just as high.

"People don't come to the stadiums for every match because if there is a game every three days it is difficult," he said. "You need to make games more exclusive and make them more special.

"Why does everyone love the Champions League? It's because it's exclusive. Even if you win it, you only play 13 games in that competition in a season.

"The Champions League could become the knockout cup of the European League, which would be the real European competition, whatever you wanted to call it.

"So, like the Scudetto and the Coppa Italia and the Premier League and FA Cup you have the European League and European Cup. There are fewer games, and all the best players in the world are involved. It would be like the NBA of football."

While the thought of reinstating a true knockout competition for European clubs would please traditionalists, picturing the Premier League, La Liga and Serie A without, say, Manchester United, Barcelona and AC Milan (to name but three of many sides) is a lot more difficult. The implications for domestic competitions left without their biggest clubs would be grave.

Ultimately, however, money talks - and club football competitions change because of it. You only have to look at the development and expansion of the European Cup and Champions League over the past two decades to see that.

One of the consequences of those changes has been the imbalance - in terms of finance and prestige - between the now all-powerful Champions League and its poorer relation the Europa League.

And while a prospective European Super League could be years away, if it happens at all, Seedorf feels something can be done now to reverse the decline in status of the Europa League. Again, however, the options boil down to money.

You probably remember that United boss Sir Alex Ferguson irked Uefa chief Michel Platini when he described seeing his side drop into the Europa League this season as "a penalty", but it is clear that what was once known as the Uefa Cup is viewed in pretty much the same way across the continent, not just on these shores.

Has it become less significant in recent years? "Yes, definitely," says Seedorf, who has fond memories of being a ball-boy in Amsterdam when Ajax overcame Torino in the second leg of the 1992 final but says he was not bothered about winning the same competition when Milan last entered it in 2008/09.

"It was already a competition in decline, and not seen as important," Seedorf explained. "I think the fans can tell us that better than anyone.

"If supporters are happy when their team is in the Europa League, then maybe change isn't needed. But it is obvious that if you were to have more important clubs in that competition, it becomes more appealing for everyone.

"It would be nice to get that feeling of 20 years when the Uefa Cup was big and very important back, but it is easier said than done.

"But Uefa have to decide how they want to cut the cake and spread the money around. The difference in finances between the two is a major issue, and setting the incentive is down to them."

Reading part one of this interview here.