Speaking in the bowels of Wembley Stadium in the aftermath of Liverpool's thrilling Carling Cup victory over Cardiff City, Reds boss Kenny Dalglish spelt out how the club's first trophy in six years was important to "an awful lot of people".

And he put it down to "the work of everyone, not just me".

What Dalglish did not elaborate on was exactly what it meant to him personally. For that, we will have to remember his reaction to Anthony Gerrard's missed penalty that settled a topsy-turvy shoot-out at the end of an extraordinary game.

Dalglish was clearly visibly moved as he celebrated his first trophy in English football since he won the 1995 Premier League title with Blackburn. 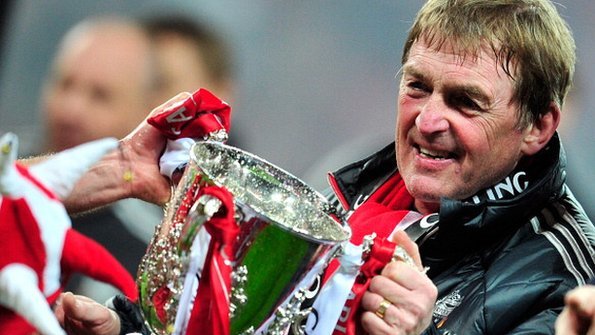 Kenny Dalglish has Liverpool winning trophies again - but he knows his team must be deadlier in front of goal. Photo: Getty

But when quizzed about his reaction afterwards he typically preferred to play things down - or at least tried to. "I might have been emotional but you need to go to Specsavers," he said. "There wasn't a tear in my eye."

To most observers it appeared otherwise, and you could understand it too.
Already a Liverpool legend after a glittering first spell with the club as player then manager, Dalglish has been back in charge at the club he loves for less than 14 months.

He now has silverware to show for it in his first full season since returning, to add to the six major trophies he collected in his first stint as Anfield boss between 1985 and 1991.

But his only acknowledgement of the short time he has taken to put a smile back on the faces of Liverpool fans came when he was praising his players.

One of his summer signings, Stewart Downing, was voted man of the match at Wembley and Dalglish said with a grin: "I think people were spoilt for choice. The most important thing is that we have won the game and we don't need to sit and go through every individual performance. But seven players have come in this season and for them to walk away with a trophy means they can be very proud of their achievement."

So too can Dalglish, although his team remains a work in progress - the 42 shots they had on Cardiff's goal on Sunday summed up a season of frustration and failure to convert chances that has undermined their hopes of a title challenge.

They have too often stuttered rather than strutted their stuff like the Liverpool of old, but Dalglish has still underlined how he sees this cup win as the start of a period of sustained success rather than a one-off triumph.

Is that justified? It certainly worked for Liverpool in 2001, when they followed another hard-earned shoot-out win over a second-tier side in the League Cup final - on that occasion Birmingham City - by winning the FA Cup and Uefa Cup in the same season.

And on top of that treble, it is often forgotten that beating the Blues provided the catalyst for another achievement too - qualification for the Champions League for the first time. Liverpool would only miss out on it once in the next nine seasons but they have not taken part since 2009-10.

In a season that will now be remembered for silverware as well as the Luis Suarez saga - and still holds hope of more glory in the FA Cup - you sense that Dalglish would rather secure a Champions League spot than repeat their Wembley triumph in May.

It will be easier said than done though. Because of the lack of a cutting edge in front of goal, a top-four finish this time around will be a big ask - the Reds are currently seven points behind fourth-placed Arsenal, albeit with a game in hand.

But, if there is more to come, Dalglish knows Liverpool's best hope of managing it is by sharing Sunday's glory, even if he could bask in it on his own if he so wished.

"Although we have won something today, that is not us finished," were Dalglish's most telling words in his post-match press conference. He could easily have been speaking in the singular, but that would undermine the team effort he is trying to promote.

"We don't want to stop here, we want to keep going," he added. "And our best chance we have of doing that is to continue to do what we do best, which is to stick together."