Why Wrexham can look forward as well as back

New Wrexham chief executive David Roberts is enjoying the nostalgia surrounding the 20th anniversary of his side's famous FA Cup win over Arsenal, but he is far more concerned about the club's future than its past.

Don't get me wrong, realism has not entirely replaced romance at the Racecourse Ground ahead of the Blue Square Bet Premier leaders' third-round trip to Brighton this weekend. There are plenty of people with happy memories of one of the biggest shocks in the competition in the modern era, and Roberts is one of them.

As a lifelong fan who was on the terraces on that freezing day in January 1992 when a Mickey Thomas wonder-goal was followed by Steve Watkin's late winner to send the Gunners crashing out, he would clearly love a win on the south coast to add to the Welsh side's already rich giant-killing tradition.

But, after helping to stabilise the perennially troubled club, he admits his real "dream come true" remains securing a return to the Football League after a four-year absence.

And their latest cup run is only part of Wrexham's revival on and off the pitch in recent months - after a decade of lurching from one financial crisis to another.

Any repeat of that cup success seemed unlikely as recently as last summer when players and staff went unpaid and the then owner Geoff Moss called off pre-season friendlies because of a lack of cash.

The future of the Dragons, and their home, was again in doubt but Wrexham's Supporters' Trust (WST) and the local community rallied to save their club in August.

Glyndwr University bought the Racecourse to ensure Wrexham can continue playing there, and fans raised a six-figure sum at short notice to enable their team to start the season.

The WST went on to complete its takeover of the club in November and appointed Roberts when it was ratified by the Football Conference last month.

On the pitch, not even the departure of manager Dean Saunders to Doncaster in September has disrupted their progress, with his replacement, player-boss Andy Morrell, overseeing a 14-game unbeaten run in the league, including wins in their last five games.

Roberts is a qualified chartered accountant who was previously a finance director of a multi-million pound private equity group in the north west of England. He told me: "There's a real feel-good factor about the town at the moment.

"Seeing the fans raise over £100,000 in a matter of hours to meet the Conference Bond was quite incredible and we had nearly 6,000 here watching us beat AFC Telford United on New Year's Day, which was fantastic, but we know there is a lot of hard work ahead to get the club back to where we want it to be.

"Life here is never dull but Wrexham is a football town. That's why people responded in the club's hour of need and why so many have fought so hard to keep it alive over the past decade.

"As custodians of the club, we all need to ensure it survives for future generations to come. The challenge of creating a financially sustainable business is paramount." 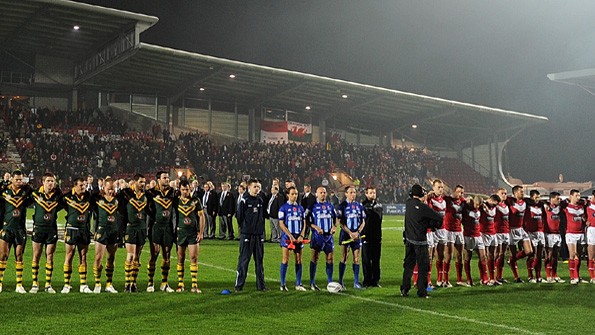 Wrexham have had to fight to stay at the Racecourse. Picture: Getty Images

They plan to achieve that by making the club an integral part of the local community again, in Wrexham and further afield in North Wales. Becoming a fans-owned club was just the start - a Community Share Scheme is to be launched to raise more funds, and hopefully ensure those financial problems do not resurface.

There may be more uncertain times ahead but, as Roberts says, promotion back into the Football League would be "a massive help on all fronts".

Will the WST succeed in safeguarding Wrexham's future? Roberts is optimistic. He was also confident of beating Arsenal two decades ago too - despite the fact the Gunners were reigning league champions while Wrexham had finished bottom of the entire league the previous season.

"It might seem strange but I just had the feeling we could beat them," Roberts explained.

"We rode our luck at times but Thomas's free-kick was worthy of winning any game and, as for Watkin's winner, I think the ground erupted when it hit the back of the net. The celebrations went on long into the night."

Roberts is not making any similar predictions ahead of Saturday's game, which will give Dragons supporters a chance to thank their Brighton counterparts for their support in a campaign to oust unpopular former owner Alex Hamilton, who wanted to sell the Racecourse to property developers, in 2004.

But he points to his side's win over League One outfit Brentford in the last round as proof that they definitely still have the ability to spring a surprise.

"Brighton are three divisions above us and have just beaten the Championship leaders, so few would predict anything else than a home win," Roberts said.

"However, the beauty of the cup is its unpredictability. We have a proud giant-killing reputation built up over the last 40 years and it would be nice to add Brighton to the list of higher-division scalps.

"We'll be taking around 2,000 fans down to the Amex Stadium and I'm sure that win, lose or draw we'll have a great day out."

You can watch a special feature on Wrexham's 1992 win over Arsenal, featuring Robbie Savage and Mickey Thomas, in Football Focus on Saturday at 1215 GMT.