If you thought solving England's goalkeeping problems were simply about cutting out the sort of mistake that Robert Green made when he allowed Clint Dempsey's shot to slip through his fingers at the World Cup in South Africa, you were wrong. The issues go a lot deeper than the odd individual error.

England manager Fabio Capello's limited options in that position have been made painfully clear in the last few days, firstly by Paul Robinson's impromptu international retirement and then by the back injury that forced Ben Foster to pull out of the squad to face Hungary on Wednesday.

With Green overlooked since that blunder against the United States and his immediate replacement in South Africa, the 40-year-old David James, having left Premier League football behind to join Bristol City, Capello is fast running out of top-flight candidates to play between the sticks - hence the call-up of Watford's Scott Loach as one of the men to fill in for Foster.

Only seven Premier League clubs could have an English keeper as their first choice in the forthcoming campaign - and that includes Foster as well as Manchester City's Joe Hart, who is not even guaranteed to start for his club this season but will face Hungary and is expected to be England's number one for their forthcoming Euro 2012 qualifying campaign.

Of the others, Robinson (Blackburn) is now out of the picture, Green (West Ham) is out of favour, West Brom's Scott Carson has not played for his country since his own costly gaffe against Croatia in 2007, Wigan's Chris Kirkland has been hampered by injuries and has managed only a solitary appearance for England as a substitute against Greece in 2006, while Newcastle's Steve Harper is uncapped and 35.

It is not exactly a deep pool of talent for Capello to delve into and, save for Hart, the majority of those goalkeepers are more likely to be fighting relegation with their clubs than challenging for Europe over the coming months.

But at least they have top-flight experience. The next generation, including the likes of Loach, Blackburn's Frankie Fielding, who has also been promoted from the Under-21 squad for the game against Hungary, and Peterborough's Joe Lewis, who was called up by Capello in 2008, are all 22 and as yet completely untried at the highest level of club football, as is highly rated Nottingham Forest keeper Lee Camp, who is soon to turn 26.

It is an issue that is not lost on Foster, who himself spent most of last season warming the bench at Manchester United before making the £4m move to Birmingham this summer that he hopes will breathe new life into his career.

"I don't think there is a shortage of quality English keepers as much as there is a shortage of opportunities for them," Foster told me. "We haven't fallen behind other countries in terms of ability but there are a lot of foreign keepers in the English game now. Young English goalkeepers coming through are not getting much of a playing chance at the top level.

"I know what that is like. It is disheartening when you don't have anything to look forward to, when you train all week long and know you won't have a game on Saturday."

Sadly, the new home-grown quota rules and introduction of a 25-man squad for Premier League clubs are unlikely to change that situation in the way they might help English outfield players progress.

Most clubs also have a foreign keeper as their second choice. Some - Arsenal and Liverpool, for example - don't even have an English keeper at number three.

Even in the youth ranks, the squeeze is on, too. Foster told me he knows how good Birmingham's England Under-17 keeper Jack Butland is because he trains with him regularly. Yet many Premier League clubs have foreign keepers in their academies, who will count as 'home-grown' should they graduate to the senior squad.

What can be done? Well, from Bert Trautmann in the 1950s, Peter Schmeichel - Foster's favourite player when he was growing up - in the 1990s and Petr Cech in more recent years, dozens of foreign keepers have enhanced our game, so I am not suggesting that clubs should be forced to field inferior Englishmen between the sticks. 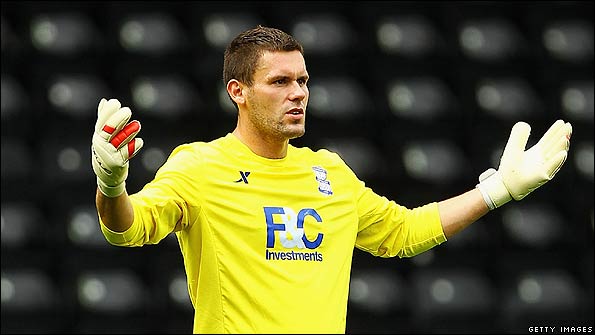 But could and should tighter rules have been brought in to aid the development of English goalkeepers, even a separate regulation stipulating each top-flight club must have at least one in their 25-man squad?

Foster thinks such an opportunity was missed but is not surprised, and added: "When people talk about developing young footballers, they don't talk about goalkeepers. The emphasis is always placed on outfield players.

"Goalkeeping is a specialised area of the game and we don't really get the appreciation that we deserve. The attitude, even when you hear people talk about the England team, is often that you pick your outfield players and get that right before worrying about your keeper later.

"Maybe because there is not an established England number one at the moment, people are starting to realise that top-class, experienced keepers do not just appear. There are plenty of good English keepers about but they need to develop and be brought through in the same way outfield players do."

Foster is hoping to help young shot-stoppers get off to the right start in his work as a consultant for GK Icon, a string of goalkeeping schools that have been set up across the country by his friend and former Watford team-mate Richard Lee, now with Brentford.

Lee, a former England youth international, put a crowd of enthusiastic and talented young keepers (and me) through their paces on a wet evening in Watford last week with the help of Foster, Loach and Hornets goalkeeping coach Alec Chamberlain.

The less said about my own performance between the sticks the better, although I am now painfully aware that I lack all three of the ingredients that Lee thinks every top-class keeper needs; namely speed, agility and spring.

Foster did not stop smiling all night, probably because he was watching my efforts, but despite being one of the friendliest footballers I have met, he does not lack determination to reach the top - something that was apparent when I asked him about how he plans to win his battle with Hart for the England spot.

The 27-year-old, who started his playing career as a semi-professional with Leamington Spa when he left school aged 16 but has won four caps over the past three-and-a-half years, told me: "The first time I played for England was an unbelievable feeling.

"I've had a taste of it now and I want more. It was disappointing not going to the World Cup but you never stop being an England fan do you? Like the rest of the country, I watch them when they are playing and get behind them. It's as simple as that.

"Joining Birmingham is a new chapter in my career and I have got something to prove because some people doubted my ability when I was at United. I want to show them what I can do and getting into the England squad again is a great start. When I get my chance, I know I have to take it.

"The baton has been passed around a few times since Paul Robinson was dropped by Steve McClaren in 2007 and the national team has been crying out for an established number one. Will it be me? Well, I've always told myself that if you want something badly enough then you will find a way to get it."