Spain are now champions of the world as well as kings of Europe after Andres Iniesta struck right at the end of a tense World Cup final to clinch a 1-0 victory over the Netherlands.

All in all, it wasn't a classic was it? There were more bookings - 14 - than clear-cut chances, although the game did open up towards the end, and English referee Howard Webb was a busy man as he tried to keep the peace.

Here are my player ratings. You might disagree with some of them, but that is the name of the game, so feel free to put me right below. 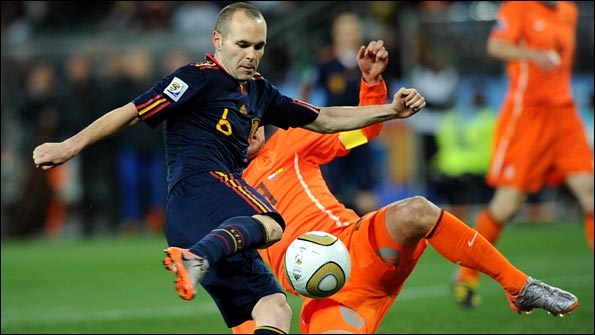 Maarten Stekelenburg 8 The Ajax goalkeeper shrugged off a hip injury that had dogged him since the semi-final and enjoyed his best game of the tournament. Made a superb save to keep out an early Sergio Ramos header from Xavi's free-kick, and repeated the trick in extra-time, when he came off his line to deny Cesc Fabregas with an outstretched leg after the Arsenal midfielder ran clear. He got a hand to Iniesta's winner but the power of the shot left him with no chance.

Gregory van der Wiel 6 Right-back who looked a lot better going forward than he did when he was defending, and got lucky a couple of times when he failed to clear his lines. His opposite number Joan Capdevila did not venture forward much but, when he did, Van der Wiel needed Mark van Bommel's help to subdue him.

John Heitinga 6 Will be remembered for being the fifth player to be sent off in a World Cup final when he received his second yellow card for dragging back Iniesta in extra-time. His first booking had come for a late challenge on David Villa in one of a number of first-half fouls by the Dutch but he had earlier saved his team's skin when, after making a hash of a low Jesus Navas cross, he recovered to get a vital block to keep out Villa's shot.

Joris Mathijsen 6 Clumsy but effective stopper who made a couple of vital interceptions when Spain were pressing in the second half. Had some chances at the other end too but lack of quality showed when he failed to connect with Van Bommel's pass from a Wesley Sneijder cross, and he also headed over with a more difficult opening in extra-time.

Giovanni van Bronckhorst (sub Edson Braafeat 105 mins) 7 Despite the result, the Dutch skipper can be proud of his last game for club or country as he brought his long career to an end. There have long been question marks over his defending but he was a cool presence at the back and his know-how allowed him to cope with the pace of Navas before he was replaced in extra-time.

Mark van Bommel 7 Arguably lucky to still be on the pitch at half-time after a series of fouls but was only shown yellow for one of them, when he went right through Iniesta with a typically no-nonsense challenge. He is never going to be the most popular player on the pitch but, by fair means or foul, he did his job, which was to disrupt the rhythm of the Spanish side and break up play.

Nigel de Jong (sub Rafael van de Vaart 99 mins) 7 While Van Bommel was disciplined and held his position, De Jong was more mobile and given the task of chasing and harrying. Took his all-action tag a bit too far with a karate kick into Xabi Alonso's chest but referee Webb rightly gave him the benefit of the doubt. Again, a spoiler - but an effective one.

Wesley Sneijder 7 Showed his class with the pass that released Arjen Robben for the chance that could - and maybe should - have won the World Cup but, otherwise, his undoubted creative nous was restricted to set-pieces that did not cause Spain too many problems. His other memorable moment was a superbly-timed tackle to stop Iniesta, who had burst into the box. Can still look back on an impressive tournament but ultimately he could not add international success to his multitude of club honours with Inter Milan last season.

Dirk Kuyt (sub Eljero Elia 71 mins) 6 A typically industrious performance on the left flank but he had his hands full dealing with the rampaging runs of Sergio Ramos and contributed a lot less than was expected going forward.

Arjen Robben 7 Will be haunted by his failure to convert when he ran clean through on goal in the second half but that should go down as a super Iker Casillas save rather than a bad miss on his part. Robben was a constant menace to the Spanish defence with his intelligent movement and also forced Casillas into another decent low stop before the break. Came into the tournament unfit and developed a reputation for going to ground too easily when he did begin to feature in games but it should be remembered that he stayed on his feet when Carles Puyol tried to haul him back, and ended up with a yellow card for his troubles.

Robin van Persie 5 As he has been all tournament, a disappointment. Had a difficult role as a lone striker, and only had scraps to feed on for most of the game, but the Arsenal striker could not impose himself on Gerard Pique or Puyol and the only impression he made on the game was a couple of clattering tackles on Sergio Busquets and Joan Capdevila, which saw him the first of eight Netherlands players to be booked. Perhaps surprising that Klaas Jan Huntelaar did not replace him at some stage.

Eljero Elia (replaced Kuyt 70 mins) 5 It seemed a long time before he touched the ball when he came on and he had to drop increasingly further back to try to see the ball. More to come from him in the future I'm sure but we did not see his electric pace in the right areas and he had a minimal impact.

Rafael van der Vaart (replaced Nigel de Jong 98 mins) 5 Playmaker by trade but mainly used in a defensive role when he came on, and was the man who played Iniesta onside for the Dutch winner.

Edson Braafeat (replaced Giovanni van Bronckhorst 105 mins) 6 Replaced a tired Van Bronckorst deep in extra-time and is likely to be his long-term successor when qualifying for Euro 2012 begins. Was out of position for the Spanish goal but the whole Dutch defence was stretched after Heitinga's red card.

Iker Casilla 8 The Spain goalkeeper admitted he was feeling nervous before kick-off but did not play like it. Will be remembered for his one-on-one save that denied Robben and also got down well at his near post to deny the same player. Did everything asked of him.

Sergio Ramos 7 Had an intriguing duel with Dirk Kuyt in the first half and got the better of him on at least one occasion, smashing a shot across the face of goal that Heitinga had to hack clear, but was also guilty of wasting a golden opportunity when he headed over from Xavi's corner when completely unmarked in front of goal.

Gerard Pique 7 He has had some forgettable moments during his campaign in South Africa and he looked uncomfortable again when Arjen Robben ran at the Spanish defence but that was the only time he looked vulnerable. Otherwise he and Puyol were rarely seriously tested.

Carles Puyol 7 His lack of pace was exposed by, you guessed it, Robben and he was lucky that the Dutch forward stayed on his feet rather than going to ground early in the second half. But that remains his only real weakness and he dominated Van Persie from start to finish.

Joan Capdevila 6 Struggled to keep Robben in check whenever he tried his luck down the right and was probably grateful when he moved across to try his luck in the middle. Also wasted a half-chance at the other end from Puyol's flick

Xabi Alonso (sub Cesc Fabregas 87 mins) 6 Was on the wrong end of that wild De Jong challenge and played some probing passes early on but struggled to impose himself on the game for long periods, especially when the tackles were flying in.

Xavi 8 Another to be disrupted by the Netherlands' physical approach and was far from at his best but, even when Spain were short of ideas, he seemed to be behind most of their best work going forward. it was his fantastic pass that set Fabregas free in extra-time.

Sergio Busquets 8 Kept the Spanish midfield ticking over when the Netherlands' spoiling tactics threatened to knock them out of their stride. His steadying presence meant they stayed on top in that vital area.

Andres Iniesta 9 (man of the match) Made a quiet start but hardly wasted a pass after half-time. Was also happy to roam from right to left, looking for space and opportunities and got his reward late on when he was in the right place to latch on to Fabregas's pass to smash home a brilliant winner.

Pedro (replaced Jesus Navas 60 mins) 7 Spain's liveliest player early on and happy to do things on his own if he had to. Tried his luck from range and not afraid to run at the Dutch defence but faded after half-time.

David Villa (replaced Fernando Torres 105 mins) 6 Was not the threat he has been throughout this tournament. Started centrally, rather than on the left where he has been most effective and, although he was lively throughout, his best chance of adding to his five-goal tally saw his shot blocked by Heitinga.

Jesus Navas (rep Pedro 60 mins) 7 Pacey winger who hugged the right touchline and delivered one dangerous low cross, but that was his best moment.

Cesc Fabregas (rep Xabi Alonso 87 mins) 8 Had a huge say in the outcome of the game despite his late introduction. Had a chance to score himself but even after missing that, he continued to prompt Spain's attacks and it was his pass that set up the winner.

Fernando Torres (rep David Villa 105 mins) 6 Was involved in the build-up to Iniesta's goal but his unhappy tournament ended with him lying on the ground at the final whistle after he pulled a hamstring in the dying seconds.

Howard Webb 8 Handed out 14 yellow cards in all - including two to Heitinga - and England's representative had to earn his corn at Soccer City Stadium. Might have shown red instead of yellow to Van Bommel and De Jong in the first half but got most of his decisions spot on. However, the only decision he definitely got wrong - awarding a goal-kick when the Netherlands should have had a corner for a deflected free-kick - resulted in Spain's winner a couple of minutes later.