Villa's Wembley woe shows need for an openness from refs

Saturday evening was not the first time this season that I have sat in a press conference after an FA Cup tie featuring Aston Villa and heard a manager bemoan a decision by an official that he feels cost him the match.

I remember only too vividly spending several minutes of a very wet Valentine's Day in the company of a very angry Neil Warnock - the current QPR boss but then manager of Crystal Palace - who was raging incandescently about linesman Trevor Massey, the man who had wrongly awarded the corner that led to Villa's 87th-minute equaliser in an eventful fifth-round tie that finished 2-2.

Villa, of course, went on to win the replay but, even before then, there was precious little public sympathy for Warnock, perhaps down to the manner of his rant, in which he called for Massey to be banned.

At the time, his opposite number Martin O'Neill agreed his side had received "a bit of luck" but pointed out that those sort of decisions even themselves out over the course of a game, let alone a season. A fair comment, as most people - including me - thought.

So when the tables are turned - as they were at Wembley this weekend when O'Neill's side were denied a clear-cut penalty early in their eventual Cup semi-final defeat by Chelsea - is anything different this time when it is him throwing his toys out of the pram?

And are there any bigger issues at stake apart from another manager moaning about his misfortune?

Ignoring the fact that O'Neill is a more considered man than Warnock when it comes to discussing officials (let's face it, most people are), the Villa boss actually raised some valid issues. 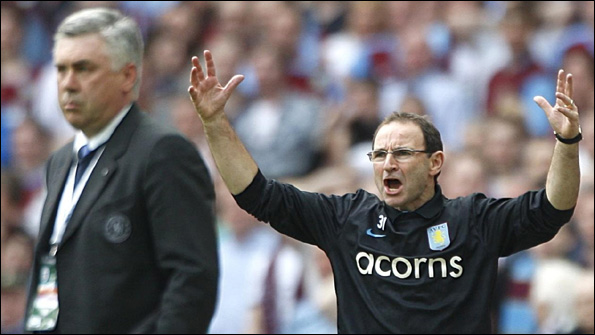 For a start, while most people inside Selhurst Park on 14 February missed the deflection off a Villa player that should have given Palace a goal-kick, there was hardly a soul inside Wembley Stadium on Saturday, let alone the millions more watching the game live on TV, that failed to see the clumsy challenge by Jon Mikel Obi on Gabriel Agbonlahor inside the Chelsea area with 15 minutes gone.

The referee Howard Webb saw it too, but chose not to give a foul. The only reason I can think of why he waved Villa's protests away was because Agbonlahor had been grappling with Obi just before he turned him but, even if you take what was a 50-50 tug-of-war into account, in my eyes - and those of O'Neill's too - it was still a penalty.

"It was clear-cut," a despondent O'Neill said afterwards, "I think everybody, even the Chelsea players because of their reaction, thought it was a penalty but the referee, who up until today I had the upmost respect for, has chosen to ignore it."

That was as close as O'Neill got to any sort of personal attack on Webb, but it was not the only incident during the semi-final that left the Northern Irishman angry and bemused by the 38-year-old referee, who has been selected as one of Fifa's 30 referees for the forthcoming World Cup but has come in for some heavy criticism from an assortment of managers during the recent campaign.

Chelsea captain John Terry's horrific studs-up tackle on his England team-mate James Milner brought a yellow card from Webb and, for similar reasons to the penalty-that-never-was, disgust from O'Neill.

"It was a horrendous challenge and James is exceptionally lucky that his career is intact," the Villa boss added. "It's a straight red card and it's straight in front of the referee with 15 minutes to go at 1-0. It's a straightforward red card and I don't think you need four replays to see that. You would expect quality referees, which is what we're dealing with, to get straightforward decisions correct."

As in the Carling Cup final at the end of February - when Villa were awarded a penalty for Nemanja Vidic's foul on Agbonlahor but the Manchester United defender escaped a red card - the above offences were spotted but, in O'Neill's mind, not properly dealt with.

He feels referees sometimes shy away from awarding a penalty in an incident in a major games such as the one in the Cup semi-final involving Obi and Agbonlahor because they know further action might have to follow.

"It was a goalscoring opportunity," said O'Neill. "Paulo Ferreira is not going to be able to get across and get the challenge in and Agbonlahor is just about to strike at goal. It is a clear, clear sending off but we didn't even get a penalty because the consequences of it all is in the referee's mind.

"I am thinking 'just apply the law'. That's all I'm looking for; a bit of fair play. But the referee (Phil Dowd) bottled it completely against Manchester United and we have had the same here. These were game-changing decisions and It was an injustice today, like it was an injustice six weeks ago."

If we accept Villa were hard done by, then what can be done? Well, forget instantly-accessible video evidence. That might be held up as the answer to all refereeing evils but, if O'Neill is right, it would have made no difference whatsoever to Webb's decisions here, or Dowd's decision not to send off Vidic.

But perhaps better communication would help to bring the consistency that the Villa boss thinks is lacking. If trust is lacking between managers and officials at the highest level over the reasoning behind some decisions, then there is an easy way to improve it.

Following the example of rugby union by giving the referee a microphone so the crowd - as well as the managers of course - can hear him explaining and justifying his actions to the players during games would certainly have been helpful at Wembley on Saturday for those of us left speculating why a spot-kick was not given.

Some kind of explanation afterwards would help clear up any confusion too. It's probably for the best that O'Neill did not get a chance to speak to Webb after the game - he had to make do with giving him a dirty look at half-time - but, even if angry managers should keep their distance, there would have been no harm in the official giving a short interview to the press afterwards.

That didn't happen of course. Webb arguably played as big a part as any other man on the pitch in ensuring Chelsea will compete in their second-successive FA Cup final on 22 May but he marched through the media mixed-zone afterwards without having to answer a single question.

Talking more won't stop referees from making mistakes, but knowing the thinking behind decisions might stop them from being so heavily criticised for their errors in the future.