Looking up Down Under

It only take a glance at the medal table at these World Championships to see that Australia is the country that represents the biggest threat to Great Britain's hopes of continuing the domination they enjoyed at the Beijing Olympics when they host the London Games in 2012...but then we probably knew that anyway.

The debate at the Super Arena all week has been whether the Aussies' results here prove that they are capable of snatching Britain's cycling crown when it really matters but, whatever you think about that, the six gold medals they have collected shows their resurgence on the track is gathering a head of steam.

Not only are they mopping up across the board, they are doing so whilst retaining the same focus on Olympic events that Britain holds; although Australia have less medals here in the five disciplines that will be fought out in two years time, they have out-gunned Britain for golds in those events after winning the both team pursuits and the women's team sprint to out-do Sir Chris Hoy and Vicky Pendleton's exploits in the keirin and sprint.

Perhaps more significantly, Australia has done all that with a squad with an average age of just 21. If Britain's performance manager Dave Brailsford can claim with confidence that his riders will get better over the next two years, then Australia's high performance manager Paul Brosnan could respond that his will too.

He didn't do that when I spoke to him at the Super Arena, but the message was clear: his squad will not rest on their laurels even if more golds follow before the end of these championships on Sunday because they have bigger fish to fry.

"When young athletes step up and perform like ours have, you can't just relax and think they are going to be the next medal winners for the next few years," Brosnan told me. "The performances of late have been really positive but we are certainly not back on top yet.

"The medal table aside, what is positive is seeing our athletes continue to progress. The fact that has put us at the top is fantastic but it's more about continuing the trajectory that we are on.

"Cycling is continually evolving, not just the teams but the events. And all our opponents are continuing to get stronger - we've seen the Germans win the team sprint this week, which shows they have improved.

"The Olympics are our main focus too and we cannot rest now because there are still a lot of gains to be made. Everyone is raising the bar, not just the Poms and the Aussies, but there are a lot of positive signs - particularly in the endurance area." 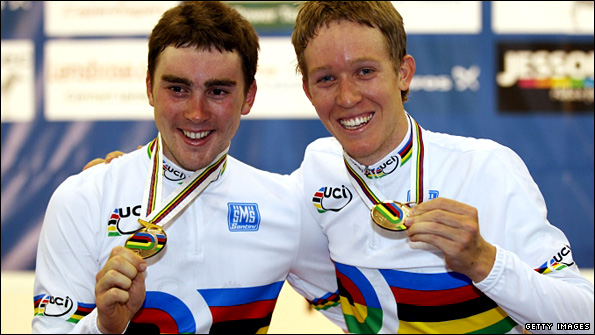 Brosnan wants more from riders like 22-year-old Cameron Meyer - who destroyed his rivals to win the points race at a canter, helped pip Britain to team pursuit gold and topped the podium for a third time with Leigh Howard in the madison - or 20-year-old Jack Bobridge, another member of that team pursuit squad.

"The time we rode in the final just shows we're coming for London and won't stop from here," said Bobridge, who clearly has stacks of confidence to go with his ability.

What is ironic is that Brosnan hopes to help to help them achieve that goal by using the lessons handed out by Brailsford's squad at the Laoshan Velodrome in 2008.

In Athens in 2004, Australia won five track cycling golds. In Beijing they managed just one medal of any colour in the velodrome; Anna Meares' silver in the sprint, while Britain won seven of the 10 track events and 14 medals in total.

New Zealand's national coach Tim Carswell, who has a few handy young riders to call upon himself, says Team GB's performance brought a reaction from every nation, but none more so than Australia, who are now starting to reap the benefits of that revolution.

"Britain lifted the game of all the countries because you knew then that you could not afford anything less than absolute excellence on the track - otherwise you would not get a sniff," Carswell told me.

"Coming out of 2008 we were certainly talking to a lot of countries and it was a case of 'right we have to get their act together and try to compete on the world stage now, or we will fall by the wayside.

"Britain were leading the way by being so good and, from a New Zealand point of vew, if they weren't then I doubt that our programme would be anywhere near where it is because we looked at who was best and what we needed to do to match them or do better.

"Finances were a concern because there were a few countries that were worried that their results in Beining would mean they would lose support from their governments in the future.

"But there were others like Australia who you can see have spent money and turned their track programme around.

"We did too, but without the same sort of funding that the bigger nations have got. Two years ago we had one coach, which was me, and no programme. It was there but it needed a kick up the backside. Basically we have been building up over the last couple of years and the big thing now for us is that we have got much better coaching in place to guide our young athletes through.

"Australia are the same. Compared to Beijing and the disappointments they had there, they now they have a very strong young team and I would say that come 2012 they are going to be a major force, although Britain will be the nation to beat again."

That rivalry is only likely to increase over the next two years. Australia may have won in Copenhagen but Brosnan and Brailsford both know there are bigger battles ahead.