As a teenage York City fan in January 1985, Jason McGill leapt over the crowd barriers at Bootham Crescent and ran on to the pitch to celebrate Keith Houchen's famous last-gasp penalty that gave the Minstermen victory over Arsenal in one of the biggest FA Cup shocks of all time.

Twenty-five years on, the Cup is again giving McGill - who has been on York's board since 2003 and became chairman in 2006 - something to get excited about, albeit for slightly different reasons, as his club prepare for this weekend's third-round trip to Premier League side Stoke City.

Under ambitious young manager Martin Foyle, York are flying on the pitch and lie in third place in the Blue Square Premier after a run of 10 wins in 11 games, a run that suggests they could trouble a Stoke side that are without a victory since 22 November and have not scored in five of their last six matches.

But, although stewards at the Britannia Stadium should be warned that McGill would jump at the chance of watching York cause another Cup upset, he will be looking at the bigger picture when he takes his seat in Staffordshire on Saturday.

Securing the club's future as a self-sustaining business, seeing it return to the Football League and sealing a move to a new ground all take precedence over a one-off success. That is why, despite York's rich giant-killing heritage, being drawn away to a top-flight team was preferable to a home tie against opponents who might be more beatable.

"It's quite difficult to weigh it up," McGill told me. "I've been a York supporter all my life so you do do look at the romance of the Cup but the other side of it is that we have to balance the books.

"In my opinion the FA Cup is the best football competition in the world and it would have been a lovely story had we got a home draw but we have to be realistic and look at the financial rewards we can glean from a match against a team like Stoke." 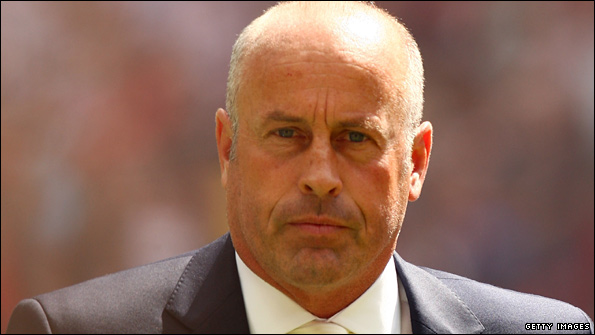 It is an outlook which is understandable given that, seven years ago, York almost went out of business altogether and that McGill, who runs a packaging company in Malton, still faces a yearly battle to keep the club's head above water.

That fight is very much hands on too, with him turning up at 8.00am on Boxing Day morning to spend around an hour-and-a-half helping around 100 supporters (and referee Robert Madley) clear snow off York's pitch to ensure that afternoon's game against Mansfield went ahead - something I can't see many of his counterparts in the Premier League ever contemplating.

"That was just wonderful for me," McGill said. "It was very emotional to see all the supporters and even the ref chipping in. We were all out working together and there was a fantastic spirit. It was worthwhile too because we won 3-0 in front of a crowd of 4,600, and got three points and the gate receipts."

Hard work has been a constant theme of McGill's time on the Minstermen's board, along with his fellow Trust members, since they first got involved to try to safeguard the club they love at the end of 2001. In a turbulent 16-month spell, City's future was threatened twice; first by former chairman Douglas Craig - who formed a holding company to separate ownership of the club from that of Bootham Crescent then moved to close the club down - and then by touring car driver and team owner John Batchelor who promised investment and co-ownership with the Trust when he took over but instead only introduced a series of increasingly bizarre ideas, such as renaming the club and changing its badge and playing strip.

As McGill says, York were "half an hour away from oblivion" when the Trust stepped in again to take the club out of administration in March 2003, but he is the first to admit that things initially continued on a downward spiral when he and his fellow fans initially took control. York were relegated into what is now the Blue Square Premier in 2004, meaning they were not only still without a ground of their own but also out of the Football League for the first time in 75 years.

Fortunately, those dark days now seem a long time ago, even if the team's on-field achievements have only recently started to match the club's progress off it and the club's home remains a controversial topic, if you pardon the chocolate pun.

I'm guessing you probably already know about McGill selling the naming rights for Bootham Crescent to local confectionary giant Nestle in 2005, which saw it gain its current moniker of KitKat Crescent, but you might not be aware that the £100,000 the club received as part of that deal allowed them to buy back the ground from Craig's holding company for £2.1m at a crucial moment. 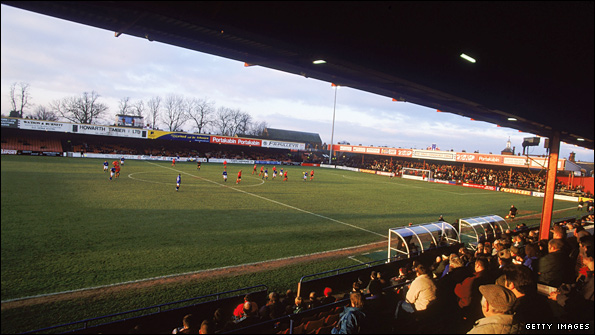 KitKat Crescent will revert to being called Bootham Crescent at the end of January when the Nestle deal ends, but the good news for York is that they are likely to be moving on soon in any case, and this time for the right reasons. They have been working with the City of York Council to find a site for a new stadium that they will share with Rugby League side York City Knights. McGill tells me three potential locations are to be unveiled at the start of 2010, with the decision on which one will be chosen set for April.

There are rumbles of discontent from York fans about the time it is taking for the stadium plans to be laid, let alone for the new ground to be built, but McGill, who took 75% of ownership of the club from the Trust in 2006, is confident that things will move quickly in the next few months and that this is the right road to take.

"The new stadium will be the catalyst for the club's future," McGill explained. "Hopefully it will bring with it new commercial opportunities. At the moment we are in a ground with high maintenance costs that was built in the 1930s when there was no idea about a need for hospitality. Famously, our executive boxes face the car park, not the pitch and we have only got three of them. That obviously limits what we can do commercially.

"The income we generate at the new stadium will not just be from every other Saturday and the odd midweek night, it will happen seven days a week and that money can be put into York's professional clubs - us and the Knights. That is the way ahead for the whole city."

The involvement of the local community is clearly important to McGill, who was born and bred in the area. He has stepped up links with schools in recent months and hopes to do the same with businesses but fears they have been put off from associating with the club because of the controversy of previous regimes.

There is still clearly much work to do to complete York's revival but the signs are they are heading in the right direction. As well as the team's resurgent form under Foyle, the club posted a profit this year for the first time since 2004, thanks to their run to last season's FA Trophy and the sale of midfielder Martyn Woolford to Scunthorpe in the summer.

But without that twin windfall, York's annual accounts would have been closer to those of 2008 when they made a loss of more than £400,000 - further highlighting the importance of their trip to Stoke.

More than 4,000 York fans will travel to the tie, with the Minstermen set to receive 50% of all gate receipts after costs, and McGill estimates it will bring around £75,000 into the club's coffers. That will not be enough to immediately put them in the black again for the start of 2010, but it should allow Foyle to bolster his squad for the second-half of the season.

"It's not mega-money but for a club like us it does make a significant difference. It all goes into the squad and will help Martin improve the team to take us to the next stage. I never want to say the 'P' word because I don't want to tempt fate but that is our aim, to get promoted back to the Football League."

From speaking to McGill it is clear he realises there is no quick fix to turning round more than a decade of decline, and York are undoubtedly better off having a realist in charge following the false promises given by past owners. Still, will the usually pragmatic McGill allow himself to dream of another shock result at Stoke to go with the win over the Gunners he witnessed a quarter of a century ago?

"All we can ask of the players is that they give 100%," he said. "If they do that, you never know in the FA Cup. It's one of those competitions where shocks abound - we will be giving it a really good go."