Watson ready for next step

It's appropriate that Heather Watson has become the latest young player to put a smile back on the face of British tennis - she rarely stops grinning herself.

The bubbly 17-year-old, crowned US Open girls' champion a month ago, is on a rare trip back to the UK as she prepares to turn professional and continues the launch of her senior career.

She will become a pro on her return to America next week; the next chapter in a story that began when she won the Guernsey under-eight and under-nine short tennis titles in 2000.

Watson's promise at tennis led to her moving at the age of 12 from the Channel Islands to Nick Bollettieri's academy on the west coast of Florida, where she has lived ever since. That may sound idyllic, but it meant leaving her friends and most of her family behind - and a lot of hard work on and off the tennis court.

It paid off, eventually. Like her friend and fellow British hope, Laura Robson, Watson is now a junior Grand Slam champion. Unlike Robson, who is 18 months younger and won last year's girls' Wimbledon title at the age of 14, Watson had to wait for her success.
In fact, Watson's win came just in time.

When I spoke to her mother Michelle immediately after watching Heather being beaten in the first round of the girls' singles at this year's Wimbledon, she told me that her daughter's future direction in the game would depend on how she fared at Flushing Meadows.

It was not quite her last chance saloon - Watson had been offered the chance to continue her education free of charge with full scholarships at several prestigious American universities, who wanted her on their tennis teams, but taking the college option would have all-but signalled the end of her professional hopes.

Thankfully, it didn't come to that. When Watson became only the second British player after Andy Murray to win the junior US title, it was enough to convince her that she did have what it takes to make an impact in women's tennis too.

I met her on a chilly autumn morning at the Lawn Tennis Association's headquarters in Roehampton where, while I wait for her to finish an interview with BBC Radio 5 live, Jamie Murray, Ross Hutchins and Jamie Delgado file into reception and shuffle off towards the practice courts.

This is just part of their daily routine but, having lived in Florida since 2004, Watson is far less familiar with the National Tennis Centre and has not seen much of any of her compatriots either.

"I only met Andy Murray properly for the first time yesterday," Watson told me, enthusiastically. "He just said 'Hi, how are you'. I was pretty excited but I just tried to keep cool!"

That's probably the closest Watson comes to admitting ever being starstuck but, despite her all-American upbringing, she is much like any British teenager when discussing her favourite topics - X-Factor, Johnny Depp... and shopping. 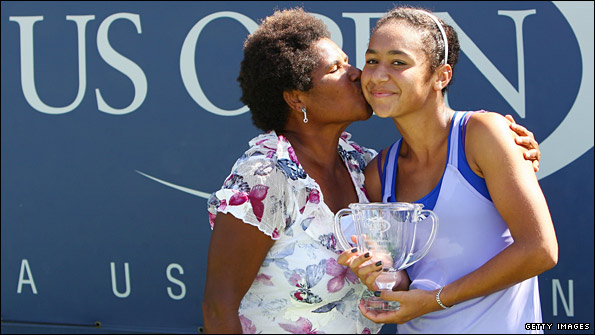 Watson celebrates her US Open success with her mother Michelle

"I live right next to one of the best beaches in Florida but they don't have anything as good as Top Shop back in the States," Watson, who loves fashion almost as much as her idol Serena Williams, tells me ruefully as she discusses a recent shopping trip to the new Westfield shopping mall in west London.

Robson is the British player she knows best, and spends most time with when on these shores. The Australian-born Londoner not only knows the grind of her daily routine - just as importantly they share an interest in the fortunes of Irish twins John and Edward, and have a lot of laughs when they meet up off-court, as they did for a Chinese meal last week.

Given that they share similar globe-trotting backgrounds, and the same dreams in tennis, it's perhaps not a surprise that the two get on so well. "We are friends, not rivals," adds Watson, who has never played Robson competitively but teamed up with her in the doubles at Barnstaple earlier this month.

Like Robson, Watson will concentrate largely on senior tennis over the next 12 months but we should not under-estimate the task that faces her as she looks to translate her junior achievements into senior success.

On the junior Tour, Watson is the world number three and the British number one but, in senior terms, she is ranked 603rd in the world and 17th nationally.

She is still coming into the professional ranks at a relatively late age, too. Her nimble style might recently have seen her compared to Martina Hingis by LTA head women's coach Nigel Sears but, by the time she was Watson's age, the 'Swiss Miss' had won four senior Grand Slam titles.

Bollettieri predicts that Watson, whose strengths are a big serve and her speed around the court, "can be a very good professional. By that I mean not just 150 or 100 but to make a good living".

But that might take some time. Heather's first aim is to get close to the top 300, the territory where players like junior number one Noppawan Lertcheewakarn - who she beat on her way to the US Open title - reside. Watson is confident she is can match her achievements and could feasibly manage the leap quickly if her first senior results are good.

Her victory over another Brit, Mel South, at Barnstaple was encouraging - South is ranked around 450 places above her - as was Tuesday's win over German top seed Mona Barthel (the world number 361) to qualify for the main draw of the AEGON Classic in Glasgow. 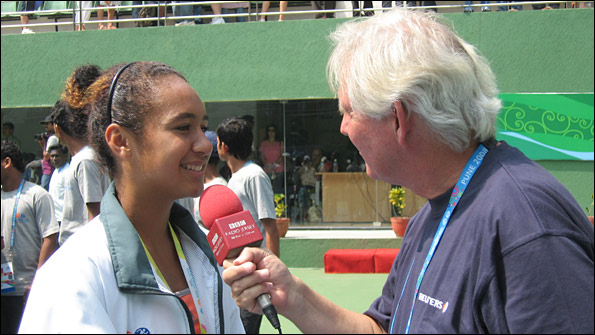 Watson has had to get used to more media attention

But Watson will need to keep beating higher ranked players over the next few months in smaller senior tournaments, while keeping her profile high by trying to win major junior ones - she is eligible to enter them for most of next year.

Breaking into the top 200 will be even more difficult - and she will need more invitations to top events to even get the opportunity to win the points she needs to manage that - but her US title will be a massive help in persuading tournament organisers to give her a place.

It already guarantees her a wildcard into the qualifiers for the 2010 senior event at Flushing Meadows, where Robson got to within a game of the main draw this year.
All in all, it's a big ask - even without factoring in Watson's education. She is in her final year at Pendleton High School, which is attached to Bollettieri's Academy in Bradenton and intends to graduate next summer before turning to full-time tennis.

"As soon as I get back to Florida it will be official - I'll become a professional," Watson told me. "But until June my life will be pretty similar - I'll just be playing a lot more tournaments. Then I will finish my high school and all my focus will be on tennis.

"I'm going to set a goal for myself with my ranking and try to reach that, and if I do I'll set myself another one. I know I need to carry on getting fitter and try to keep on improving."
The rigours of life at Bolletteri's notoriously tough 'boot camp' will undoubtedly prove useful in the future, however.

She moved there on her own, before being joined by her mother 18 months ago, but has never been fazed about living so far from home, which bodes well for transient life on the women's Tour.

Watson is one of around 300 players from more than 70 countries at the academy, which boasts alumini of the calibre of Maria Sharapova and Jelena Jankovic, and her place there initially cost her parents £40,000 a year - the LTA now pick up the tab.

"I just enjoyed meeting people and all the different characters around me," Watson, who has three older siblings, explained. "My best friends are from Korea and California."
"I don't really get homesick. We are a close family so it's not always been that easy but I speak to my dad every day."

She is yet to decide whether to come back to the UK, and the rest of her family, in June, or remain in Florida.

But, even if she takes the latter option she knows that, after years of existing under the tennis radar of the British public, expectations of her progress are, suddenly, high.
There are upsides of course - Watson has received her first fanmail since winning in the States - but will the added pressure take its toll? Not likely, as the impression she gives is that she remains as driven as ever.

"I'm really enjoying all the attention at the moment - it's all happened so quickly," she explained, with another smile.

"Can I get to where I want to go? Yes, definitely. I have to be able to believe in myself otherwise I wouldn't be doing what I am doing and going professional. I believe I can make it all the way."

It will be fun following Watson's progress over the next few months. You can be sure she will enjoy it just as much.