Miley Cyrus Counts Up To Four... 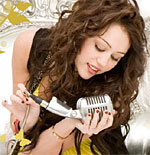 When indie bands do shambolic things, it's easy to assume that no-one in their devil-may-care, freewheeling organisation is bothered enough about perfection to try and correct them. That would be a little bit like trying, and trying is officially lame. Pete Doherty's un-tuned and unlovely guitar, for example, is never going to sound good, because that would imply that he works at what he does, rather than just letting inspiration run through him like a thick milkshake through a straw. The jig would be up, and he'd be scuppered.

However, when a Disney-affiliated pop star tries to count her band in at the beginning to the video for her new song - while the drummer keeps time with his sticks, I might add - and FAILS. You have to assume that it's been done on purpose, or it would not be there.

See what I mean? Somewhere between "one" and "four", Miley loses track of the rhythm, and then when the guitar comes in, it's like the band have elected to begin a different song to the one she was expecting. It's strange, because this can only happen because someone wanted it to happen, otherwise it would have been edited to sound, well, right.

Where I get lost is in trying to work out why. I would understand if the video showed her crying about the feckless dunce she's addressing the song to, very few people can maintain a perfect sense of musical timing while their chest is heaving and they're all snuffly, but nope, she's clear eyed and concentrating.

Don't get me wrong, the rest of the song is smashing. A three-tempo patchwork quilt of modern pop-punker attitude, all wrapped up in an immaculate gloss and, yes, owing a debt to Avril Lavigne - for the way she uses vowels as much as anything else ("yerw" instead of "you", "erw" instead of "oh", and so on...).

It's just, having finished rocking out and pointing a finger at the disappointing person in my life, I keep wondering about that count-in. Have I missed something massively important? Does the song make no sense without getting what that is all about? Is it something only teenagers understand? Oh WHY IS LIFE SO COMPLICATED?

And while we are asking The Big Questions, this picture here, which I found on the internet...what on Earth? 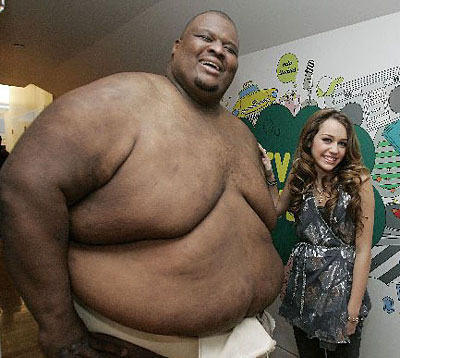 Kind of hard to tear your eyes away from, isn't it? I'd be tempted to suggest a caption competition, but I can't think straight. That man's body has its own gravitational pull on my attention. We could be here for YEARS...

No wonder she can't count any more.

You can stay up to date with Chart Blog via these feeds.