Andy’s back and this time with some Prehistoric Adventures for the little ones! This series is a little different as the first 5 episodes will premiere on iPlayer from the 8th – 12th February and the next 5 will be shown weekdays on CBeebies at 4.30pm from Monday 15th until Friday 19th February.

To find out more about what to expect from the new series we had a chat to the series producer, Adam… 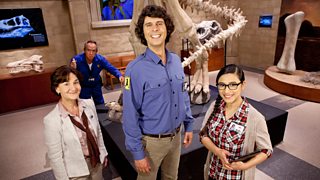 Can you briefly introduce yourself and what you do on Andy’s Prehistoric Adventures?

I’m the series producer; my job is to oversee the whole production from day one right up until the finished show hits your TV screens. Basically, I’m involved with everything that goes on – writing, casting, set design, filming, editing, visual effects…  and if you want to know what the most challenging part of working on Andy’s Prehistoric Adventures is? I’d have to say it was learning how to pronounce ‘epidexipteryx’ correctly.

OK – we’ll wait for the show to hear how we pronounce that one! So, what is the difference between prehistoric & dinosaur?

The difference is roughly 65 million years! In this series, Andy isn’t only visiting the dinosaurs he’s also travelling to the time period after they became extinct, which gives him around another 65,000 millennia to explore! It means you’ll get to see lots of strange new animals, such as a type of rhinoceros the size of a small house and a tiny creature that used to bounce around the forests of Europe like a kangaroo. Andy even gets to meet one of his own distant relatives. But don’t worry palaeontology fans; there are still plenty of dinosaurs too! 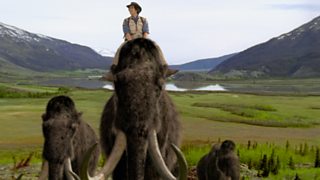 What new characters can we expect to meet in this new series?

Well, Andy’s been promoted, he’s taken over from Hattie as the head of the museum’s prehistoric gallery and he’s got a new assistant called Jen; she’s a bit of tech wizard and uses computers, 3D printers and projectors to help Andy out. There’s also the Janitor, he doesn’t say much, but you can usually spot him in the background creating havoc! And we mustn’t forget Mrs Pickles! She’s in charge of the whole museum and she knows an awful lot about dinosaurs and ice age beasts, so Andy and Jen always need to make sure their displays are perfect.

Many of our grown-up audience had fun speculating on the relationship between Andy and Hattie? Where has Hattie gone?!

I’ve often been asked this question and I hate to disappoint everyone, but Andy told me there was definitely nothing romantic going on between him and Hattie - although personally, I think it’s up to the viewers to decide whether they believe him or not…! I’m interested to see if there’ll be any speculation about the relationships between our new cast of characters. I certainly have my own theories, but I’m keeping them to myself for now. As for Hattie, her first love has always been dinosaurs, so I expect she’s gone off on a trip around the world to look for more fossils – or maybe she’s gone to work at Jurassic World! 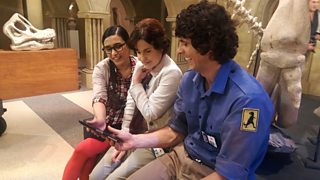 So, Mrs Pickles - is she related to Mr Pickles in Andy’s Wild Adventures?

Yes, absolutely! It’s the Welsh accent that gives it away. I assume they’re husband and wife, but as one runs a busy animal park and the other is in charge of the National Museum, they probably don’t get much chance to see each other. And speaking of Andy’s Wild Adventures, if fans keep their eyes peeled during Prehistoric Adventures, they might just catch a very brief glimpse of Kip in one episode. I’m not saying which one though!

Filming and acting with a green screen must create some unusual scenarios; any funny stories you can share?

Filming on a green screen is pretty ridiculous; everyone is running around pretending there’s a giant dinosaur stomping past when there’s absolutely nothing there – it’s like being back in the playground at primary school. But the most ridiculous thing of all is the green screen suit, which lucky crew members have to wear when they need to be in shot without the cameras picking them up. It’s basically a skin tight, stretchy green leotard that covers your entire body, even your face! Let’s just say it doesn’t leave much to the imagination! 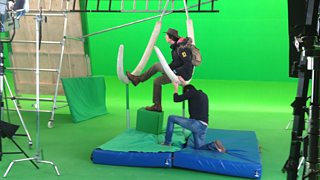 Andy having a little green screen fun (unfortunately the stretchy green leotard pictures didn't get through our censorship process!)

Rory in the Danger zone!