Wales defy the odds and edge a classic

As the strains of Hymns and Arias drowned out the booing from Irish supporters at the final whistle, the sound of Welsh rejoicing would have reverberated around the Six Nations.

Any year Wales win their first game of the Championship, two words are instantly unavoidable, so we may as well not tread too lightly around the subject.

Another 'Grand Slam' bandwagon has been launched in the Valleys after this stunning last-gasp triumph in Dublin, but the pain writ large all over the battered face of Paul O'Connell should act as at least a momentary handbrake on expectations.

With a minute to go in this thrilling encounter, the Ireland captain could have been the one fielding questions later about his own side's prospects of repeating their 2009 clean sweep, instead of dissecting the finer points of a shattering loss with the assembled media. Rugby can be a cruel game.

But before we consider what this Welsh victory might lead to, it is worth recalling the inauspicious circumstances Warren Gatland's men found themselves in both before and during the match. 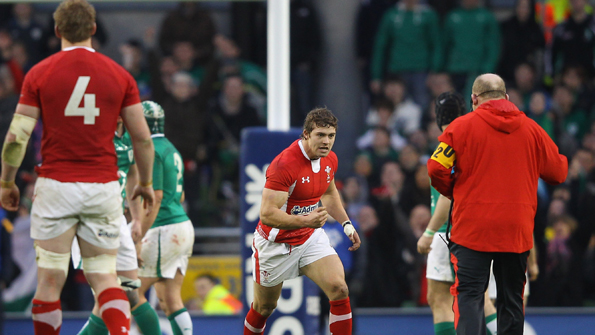 On a mixed day for the kickers, Halfpenny struck the vital blow with under a minute to go

Devoid of half of the pack that outplayed Ireland so comprehensively in their World Cup quarter-final in New Zealand, victory appeared a tall order against an established and experienced Irish eight at the outset.

Factor in Ireland's propensity for starting the Championship well - they had won their opening game for the last seven years - and the fact Wales had lost on four of their last five visits to Dublin, and the omens were not promising.

Then throw in concerns about the fitness of Rhys Priestland and Jamie Roberts, who were declared ready for action despite weeks of inactivity, and the odds seemed stacked against them.

Yet for an hour they more than matched the hosts and should probably have had a comfortable lead, given their greater ambition, fluidity and firepower, rather than find themselves a point behind when Jonny Sexton's third penalty made it 16-15 on the hour.

With 15 minutes left, it would have taken a brave Welshman to back their side to win when Bradley Davies was sin-binned for an ugly tip tackle on Donnacha Ryan. Even more so when Tommy Bowe's try after 68 minutes made it 21-15, with Wales still a man down for another eight minutes.

That they then gave themselves a chance to win the game with George North's try, even before Davies returned to the fray, already said much about their character, composure and self-belief.

Back to a full complement with three minutes remaining, the Welsh then showed admirable patience to work their way from their own 22, first up to halfway, then to Ireland's 22, before Stephen Ferris's high tackle on Ian Evans presented Leigh Halfpenny with the opportunity to win the game.

If one sympathised with Ferris as he trudged miserably off after his yellow card, when a penalty looked sufficient, and Ireland in general for the gut-wrenching way in which they snatched defeat from the jaws of victory, there was still a sense that the more deserving team won, even if the manner in which they ultimately triumphed - as Gatland admitted later - was fortunate.

Bradley Davies, who until that moment had enjoyed a storming game, carrying prodigiously and providing a safe haven at the front of the line-out when danger lurked elsewhere, might not have returned to the field at all, if referee Wayne Barnes had applied the same letter of the law as Alain Rolland.

His senseless tackle after the ball had gone looked worse than the one which saw Sam Warburton dismissed in the World Cup semi-final against France, and means he is unlikely to be unavailable for at least Wales' next two games, at home to Scotland and away to England.

With their World Cup locks Luke Charteris and Alun Wyn Jones already hors de combat, that is an unnecessary blow Wales could have done without.

But Gatland didn't seem too perturbed, citing possible alternatives in the uncapped Lou Reed, and Ryan Jones - who could move into the second row from blind-side, with Dan Lydiate expected to be fit next week. He also hinted Alun Wyn Jones may be ready to return before the end of the campaign.

The loss of Warburton, who suffered a dead leg that will require extensive treatment in the next couple of days, would also be a setback, although Justin Tipuric equipped himself well on his first taste of Six Nations action after replacing the skipper for the second half.

Wales seem happy to roll with the blows, cushioned by a growing self-belief and confidence that if their forwards can deliver enough ball at sufficient speed, their marauding giants in the backs will make good use of it.

"I thought he was absolutely world class, particularly in that second half," purred Gatland, citing the 6ft 4in, 16st 5lb, 19-year-old's part in the second try for Jonathan Davies, a stunning burst of pace and power off his wing before a delicious offload out of the back of his hand.

North then showed his own finishing power by smashing through Tommy Bowe and Gordon D'Arcy for his 10th try in 17th Tests.

Many more will doubtless follow. With the 6ft 6in Alex Cuthbert now another wing option, and hulking centre Jamie Roberts and scrum-half Mike Phillips already established in the physical intimidation stakes, Wales are armed with formidable attacking weaponry.

"On average we were 9kg a man heavier than Ireland in the backline, and in modern rugby, if you have got an advantage like that, you have got to use it," noted Gatland.

Roberts had opined beforehand that Wales would require a "perfect performance" to better the "near-perfect" one that did for Ireland in the World Cup.

In the event, that proved incorrect. Gatland and his fellow coaches looked far from ecstatic afterwards, and the head honcho's assessment - "I think we were only at 70% of what we are capable of" - spelled out a clear warning to the rest of their Six Nations opponents.

With three home games to come, the first next Sunday against a Scotland side in full soul-searching mode after extending their try-less trauma against England, it would be surprise if Wales were not in the title shake-up when France visit Cardiff on 17 March.

Gatland's biggest problem will be managing expectations, even with a trip to Twickenham to negotiate.

Ireland - with two further home games to come themselves - may yet recover to have a say in the final outcome. But they will need to shake off this setback quickly.

Six days is not long to nurse aching limbs and lift spirits before an acid test next Saturday evening in Paris, where they have not won since Brian O'Driscoll tripped the light fantastic in the first year of the expanded Six Nations 12 years ago.

Without their talisman against Wales, Ireland looked denuded of class in midfield and the defensive leadership the great man gives them.

Kidney showed no inclination to blame refereeing decisions for defeat, and rightly so.

"We will take a good look at what we can solves ourselves first," he said, even if it was clear Ireland felt a sense of grievance for a second year running after defeat by Wales.

Elation on one hand, despair on the other. Such is the way of the Six Nations. This year's championship is already alive with possibilities.