Has Johnson made the right choices?

Martin Johnson presaged all explanations about his choice of personnel for the World Cup with this rider: “You can’t cover all eventualities with 30. Any solution leaves you slightly thin somewhere.”

Too true. But while every coach announcing a squad for the global gathering in New Zealand was forced into a compromise or two, many England fans will be left wondering if their manager has made the right ones.

In terms of a World Cup, what is more important? An extra prop in case of injuries? An extra lock to ease the workload? Specialist back-up at fly-half? Or variety and balance in midfield?

Johnson wrestled with these questions and more in finalising the composition of his squad and decided the first two outweigh the latter two. 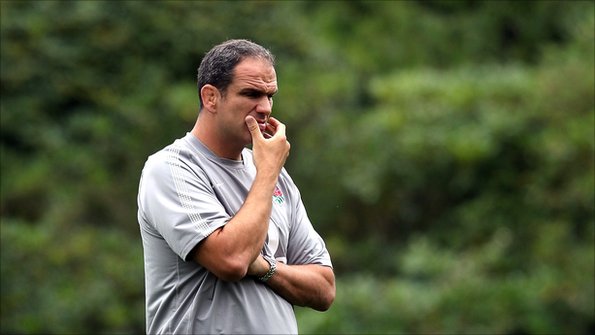 As he said himself, if he gets one or two injuries in the front-row department, he looks like a genius. If Shontayne Hape does himself a mischief, then his inside centre options are, well, interesting.

The fitness and form of certain players appears to have forced Johnson’s hand in certain areas and given the squad an imbalanced look elsewhere.

To my mind England look light in the key playmaking roles of 10 and 12. While Riki Flutey’s omission is no great surprise on form, given his struggle to recapture the highs of 2009, it nevertheless raised eyebrows on two counts.

Firstly, the fact Johnson is only taking two fly-halves. If either Jonny Wilkinson or Toby Flood pick up an injury in the run-up to a game (Wilkinson, you may remember, did so in the week before England’s opening match against USA in 2007, swiftly followed by Olly Barkley, leaving Mike Catt and Andy Farrell to juggle the controls for the hammering which ensued against South Africa), then England will have no specialist, and only Delon Armitage as goalkicking cover, on the bench.

Flutey, who has played at 10 for Wasps on occasion, was considered able to provide that option in an emergency. That role now falls to scrum-half Richard Wigglesworth, who played there a handful of times for Sale, and can also do a bit of kicking.

“We can cover 10 a bit easier than nine,” Johnson said in explaining his choice of three scrum-halves. In other words, Wigglesworth is considered a better bet in a crisis at 10 than Ben Foden at nine.

Secondly, unless Johnson is seriously pondering the merits of pairing Wilkinson and Flood together in midfield – and the lack of a third fly-half would suggest not - then Shontayne Hape has apparently nailed down the number 12 position.

That will be a surprise to those who watched his fumbling efforts against Wales in Cardiff, but Johnson continues to defend his man against the criticism hurled in his direction.

“We think Shontayne has been playing to a high level for us over the last year,” the manager said.

“He is very strong, a smart footballer, he can offload…I think he is an under-rated player. Because he doesn’t do things that make people go ‘wow’, he gives other people the opportunity to do things because of the way our team works.”

That last line may provide an additional clue. In citing Mike Tindall and Matt Banahan, as well as Wilkinson and Flood, as additional options at 12 in the absence of a ball-player like Flutey, Johnson’s preference for muscular, bash-and-crash centres capable of getting over the gain line, rather than those with more refined methods of breaching opposition defences, is abundantly clear.

This impression was highlighted when Manu Tuilagi, the baby of the squad at 20 but a beast of a man, was asked to articulate the strengths he will bring to the party.

“I just run hard at defenders and try to break them down. It is simple really,” said the Anglo-Samoan. As a mission statement for a wannabe England centre, it seemed rather apt.

But it highlights the reality that England are not going to win this World Cup playing the all-singing, all-dancing brand of rugby that bedazzled Australia at Twickenham last autumn.

“Believe me, when you get into quarter-finals, semi-finals, finals, you would rather win ugly than lose pretty every day of the week,” Johnson said. “That is what World Cups are all about.”

It’s hard to argue with that logic, coming from the man who led England to glory in 2003.

Hence, Johnson has opted for extra man-power in areas of England strength, namely the front five, the scrum and the line-out.

While five props might be considered a luxury (at least not one England enjoyed at the last two World Cups), the fact that Andrew Sheridan is still on the way back from shoulder surgery appears to have dictated the need for extra cover in the shape of David Wilson.

“If you only take four props and one is injured, you are only another injury away from being in deep trouble,” noted the manager, mindful too that England’s first two opponents, Argentina and Georgia, have a particular relish for scrummaging.

Johnson’s penchant for a fourth specialist lock, in contrast to Clive Woodward in 1999 and 2003 and Brian Ashton in 2007, who both counted on the versatile Martin Corry, is less easy to fathom.

Having featured in all 18 games (and started 17 of them) England played across the 1995, 1999 and 2003 World Cups, Johnson is uniquely placed to appreciate the burden a potential schedule of seven Tests in seven weekends - should England reach the final - places on front-five forwards in particular.

He had the option of utilizing Tom Croft – his likely starter as blind-side flanker - as an extra lock, but instead deprived himself of an additional back-row option.

That places an extra onus on the swift return to fitness of captain Lewis Moody, on whom Johnson is counting to recover in time for the opening match against Argentina.

Along with Sheridan and Ben Youngs, it seems increasingly likely that three of Johnson’s preferred line-up against the Pumas will have played next to no rugby in the build-up.

“In an ideal world everyone would be fit, healthy and have had some game-time, but that is not the world we live in,” he added.