On paper at least, the 16th Heineken Cup final has all the ingredients to be a classic.

Leinster and Northampton are two top-drawer sides, chock-full of Test stars, brimming with attacking talent, both eager to give full freedom of expression to their particular brands of positive, attractive rugby.

Cardiff's Millennium Stadium, nigh-on packed to capacity and hosting its fourth final in 10 years, should be in for a treat.

Victory for either side will see them join the elite band of clubs - Leicester, Wasps, Munster, plus four-times champions Toulouse - who have won the title on two or more occasions.

And while 2009 champions Leinster start marginal favourites, Saints - bidding to become the first side to go through a Heineken Cup campaign unbeaten after winning all six of their pool games - are far from outsiders.

Battered and bruised they may be after last weekend's gruelling Premiership semi-final defeat by Leicester, Northampton intend to use the lingering sense of injustice caused by Manu Tuilagi's non sending-off to their advantage on Saturday.

"Emotionally, you have to up it for a final and we have got to use that hurt and passion," says their captain, England hooker Dylan Hartley. "We have been fighting on two fronts but now we can say 'this is the last game', put everything into it and not leave anything to chance."

The tactical leanings of their opponents should also help Northampton rediscover the best of themselves, with England duo Ben Foden and Chris Ashton hoping to see more of the Millennium's wide open spaces than they did at Welford Road.

"It is a completely different challenge," noted Saints' director of rugby Jim Mallinder. "It is fairly clear that Leinster like to play with a quicker tempo. They have got some strong forwards but they are equally strong out wide. They are very keen on using their backs, particularly from first phase. We know we are going to be stretched at times and put under pressure. But we have faced that against other big sides and we have come through."

Certainly there is no shortage of European pedigree in the Saints camp.

Mallinder guided his former Sale side to victory in the second-tier European Challenge Cup (then known as the Parker Pen Shield) back in 2002, while Foden - playing on the wing - was part of the Sharks side that won it again in 2005. The England full-back and half of the current Saints team also triumphed in the same second-tier tournament two years ago, in their first season back in the Premiership.

They also have a previous Heineken Cup winner in their midst in the shape of assistant coach Paul Grayson. The former England fly-half was at full-back when a patched-up Saints won the trophy in 2000, kicking the three penalties that did for Munster at Twickenham.

Other members of that side have also been offering encouraging words this week, notably ex-England flanker Tim Rodber, who emailed the squad to remind them that winning the Heineken was his "greatest rugby moment".

Now a corporate bigwig in New York, Rodber is flying over to Cardiff to see if his beloved Saints can join Leicester and Wasps as two-time English winners - not that the current side need any reminders of past deeds to stir themselves for this one. 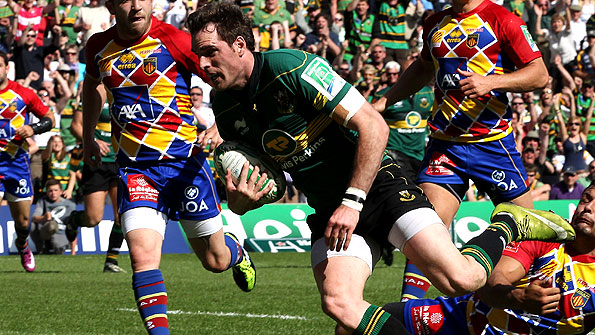 Outside centre Jon Clarke has been at the club for eight years, enduring the pain of relegation from the Premiership in 2007 and serious injury when he appeared on the verge of an England breakthrough.

While international recognition is still an ambition (the suspension of Tuilagi may give Clarke an opportunity in next month's Churchill Cup), Saturday will be the biggest occasion of his rugby life. And to top it all, his opposite number will be living legend Brian O'Driscoll.

"He is a world-class player playing really well, simple as that," states Clarke matter-of-factly. "Attacking-wise and defensively, he will destroy you if you let him get on the ball. The challenge is right there in front of my face and I have got to step up.

"If you want to be successful, the main stage is where you have to do it. Everyone is going to be watching, so if you want to make a name for yourself, this is the time.
"It is a great feeling, having been here quite a while, to have the chance to play in a Heineken Cup final. We have to look on it as our one chance. It might not ever happen again. It is a huge occasion for all of us."

Northampton, despite the impressive strides made in recent years and a burgeoning young side, cannot simply expect to rely on this experience becoming a regular ritual.

As a consequence of their success, they will be without at least six - possibly more - of their first-choice side, plus two or three of their summer recruits - for the opening six-to-eight weeks of next season, on duty at the World Cup.

While that may not prove an insurmountable handicap with a strong squad, competition on the Premiership front is intense, with seven or eight sides all contenders for a European place.

When the Test stars were away during this year's Six Nations, Saints lost four league games on the bounce to slip out of contention for a top-two finish and a home semi-final. On their return, they won five out of their last six, plus a Heineken Cup quarter-final with Ulster and semi-final against Perpignan.

"We had been struggling and put ourselves in a bit of bother but straightaway, when the internationals returned, we just carried on from where we had left off before they went away," noted Clarke, whose own form has benefited too.

Sure, Leinster, Munster and Welsh regions such as the Ospreys and Cardiff Blues suffer similarly when their international stars are away, and will do during and after the World Cup period, when players will return mentally and physically drained.

But without the threat of relegation and a relatively safe passage to Heineken Cup qualification the following year, the leading Magners League clubs can afford to be more sanguine about domestic matters, and gear their players' needs towards European competition.

Two-thirds of Leinster's side have already won a Heineken Cup final, against Leicester at Murrayfield two years ago. Eight of them were in the Ireland team that smashed England - including a quartet of Saints in Foden, Chris Ashton, Dylan Hartley and Tom Wood, the latter sadly unfit for Saturday - out of sight in the Six Nations finale two months ago.

Will that greater experience of handling the big-match occasion prove the difference on Saturday? 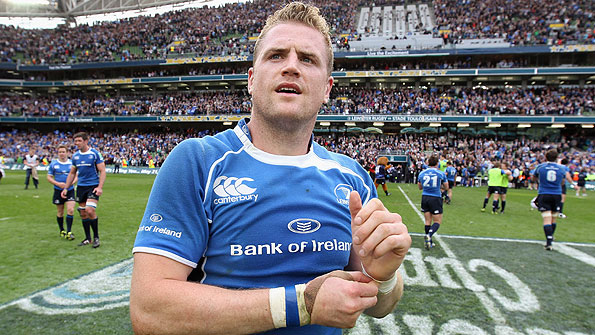 Number eight Jamie Heaslip has become the focal point of the Leinster side. Picture: Getty

Leinster, for so long the bridesmaids in the Heineken Cup with five quarter or semi-final defeats in six years until they got it right in 2009, look well equipped to not just equal Munster's two titles with victory on Saturday, but go on to surpass their great provincial rivals.

Apart from departing lock Nathan Hines, all their main core of players have been retained for at least the next couple of years, including the talismanic O'Driscoll and number eight Jamie Heaslip.

Where once they had all the attacking flair behind the scrum but were flaky up front, now they are a team of all the talents, disposing of Leicester in the quarter-finals and four-time champions Toulouse in a pulsating Dublin semi-final.

In his first season as a head coach, New Zealander Joe Schmidt is on the verge of a domestic and European double, having also guided them into the Magners League final against Munster a week on Saturday.

"I think they have gone to another level," noted Saints boss Mallinder. "He has made them tougher up front; they compete and scrummage with the best teams, as well as having that attacking flair which Leinster have always had. I think he has given them an all-round game."

"Once they get into a pattern they seem impossible to stop," added Northampton's wrecking-ball prop Soane Tonga'uiha, who along with three Leinster players - Heaslip, flanker Sean O'Brien and full-back Isa Nacewa - has been short-listed for the ERC European Player of the Year award (with Stade Francais' Italian captain Sergio Parisse completing the nominees).

"We have got to stop them playing, disrupt them in the set-piece and try not to allow their big ball-carriers to get into the game."

Easier said than done, for Leinster - aided by the introduction of scrummaging coach Greg Feek, the former All Blacks prop - are a far more formidable proposition these days, with Mike Ross anchoring their set-piece, alongside South African hooker Richardt Strauss and the ever-improving Cian Healy.

If those three hold firm against the Saints front row of Tonga'uiha, Hartley and another South African, Brian Mujati, then Leinster - with O'Brien and Heaslip to the fore - may have the edge in the back-row battle. 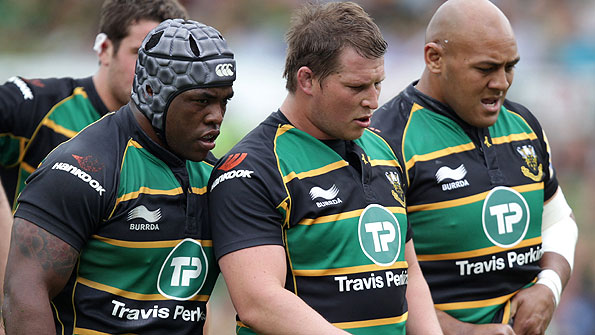 The Saints front row of (from left) Brian Mujati, Dylan Hartley and Soane Tonga'uiha will aim for dominance in the scrum. Picture: Getty

"Our pack likes the challenge that has been laid down for it," says Tonga'uiha, assessing a potentially riveting match-up at scrum-time. An area where Saints might fancy a bit of dominance then?

"If we do, it will take a long time to come," added the 6ft 5in, 23-stone powerhouse. "It is not going to take 40, 50, 60 minutes like in other matches. Leinster are going to stick with us the whole way and if we do get on top, it might not be until the last five minutes."

If the outcome is still in doubt at that stage, Saints will have done well in the eyes of most observers.

While their progress has been rapid - they won the European Challenge Cup in 2009 and the Anglo-Welsh LV=Cup last year - the transition from National League One champions to Heineken Cup winners in the space of three years may just prove one step beyond a still developing side.

But not by much.