Six Nations Team of the Tournament

With another Six Nations done and dusted, it's time for you to select your team of the tournament.

After France wrapped up their third Grand Slam, and fifth title, in nine years, mine is unsurprisingly dominated by Frenchmen, with 10 of them making it into my XV, plus two Irishmen, two Scots, a lone Welshman and not a single Englishman.

I dare say a few of you will have something to say about that. So let's hear from you.

Full-back: Clement Poitrenaud (France) Quite a comeback to Test rugby for a man who has made a few high-profile faux pas in his career. A rock at the back for the champions, his running from deep was a delight and a potent weapon. Lee Byrne, Rob Kearney and Delon Armitage all slipped from last year's peaks, but Ben Foden offered England a glimpse of what might have been, and what could be.

Right wing: Tommy Bowe (Ireland) Along with Paul O'Connell and Thierry Dusautoir, the only player to make it into this side two years in a row. With two tries against England and another score against Scotland, the Monaghan man cemented his progress from last year's Lions tour as a world-class player and the best finisher in Europe. Honourable mention for diminutive Frenchman Marc Andreu.

Outside centre: Mathieu Bastareaud (France) Wales' James Hook blossomed as a Test player in this Championship, supplying three tries and a constant source of creative inspiration and but for the odd missed tackle and botched try, he might have snuck in. Despite a mixed outing against England, the giant Bastareaud was a major influence for the champions, even outshining Brian O'Driscoll against Ireland.

Inside centre: Yannick Jauzion (France) Alongside Bastareaud, the rock on which France's formidable defence was built. The celebrated centre may not have the pace of old, but was still an influential presence between the young guns around him. Finished a dazzling try against Italy and held things together when the going got tough against England. Ireland's Gordon D'Arcy also returned to form.

Left wing: Shane Williams (Wales) Very close call this one, with Keith Earls confirming the promise of his debut season with three tries, announcing his arrival as a genuine Test player and O'Driscoll's likely long-term successor. But Shane just edges it, for inspiring and capping the most memorable 10 minutes of the Championship against Scotland, his individual try against France, and his genius.

Fly-half: Dan Parks (Scotland) Francois Trinh-Duc may have the better all-round game and played a fine hand behind a powerful pack, but Parks, left out of Scotland's opening match, arguably had the greatest individual impact on any team. Won three man-of-the-match awards, two in losing causes against Wales and Italy, before ensuring the champagne tasted sweet with a superb late kick in Dublin. 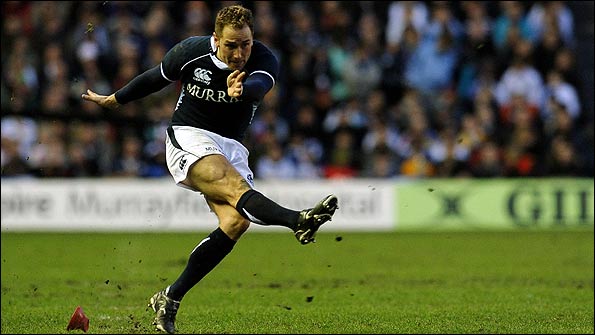 Scrum-half: Morgan Parra (France) A mixed bag from France's petit general against England, but over their previous four matches showed maturity way beyond his 21 years to dictate tactics, marshall forwards and backs and land 79% of his kicks at goal. Ireland's Tomas O'Leary also had his moments, while Pablo Canavosio provided Italy's highlight with the match-winning try against Scotland.

Loose-head prop: Thomas Domingo (France) Fabien Barcella was the talk of the French front row in the autumn, but in his absence, the squat Domingo provided ample evidence the Tricolores have two loose-head operators of real class. Gave England's Dan Cole a harsh lesson in Paris, and caused every opponent trouble. Gethin Jenkins' display against Italy merely reminded Wales what they were missing.

Hooker: William Servat (France) The 32-year-old was another French veteran to enjoy a superb renaissance after a period on the fringes, one of the champions' key leaders and a central cog in their formidable scrummaging unit. No real rivals apart from his own back-up Dimitri Szarzewski, although Ross Ford must take some credit for Scotland's record of only losing three of their 53 line-outs.

Tight-head prop: Nicolas Mas (France) The Basque prop has not always been a first choice over his seven-year Test career, but was another who excelled at the coal-face from the opening round against Scotland, providing the platform for others to exploit. Honourable mention to Dan Cole, who despite his Paris travails has established himself after just five caps, and John Hayes, just for reaching his century.

Lock: Paul O'Connell (Ireland) Still the most dominant and consistent lock in Europe, his line-out prowess and ability to steal opposition throws remains unmatched. Always near the top of the tackling and ball-carrying stats and in the thick of the rucks and mauls. Honourable mentions to France new-boy Julien Pierre, Scotland's Alastair Kellock and Welsh giant Luke Charteris.

Blind-side flanker: Thierry Dusautoir (France) One of the most keenly contested positions, where the ferociously committed Stephen Ferris might have deprived France's Grand Slam captain of the number six jersey but for an under-par outing in the final round against Scotland. Scotland's Kelly Brown was also part of a tremendous back row unit, but Dusautoir edges it for his under-stated leadership.

Open-side flanker: John Barclay (Scotland) One of Scotland's three back-row "Killer Bs" who excelled in the scavenging role of a true open-side but also showed impressive touches linking up play in attack. Could develop into a Test Lion by the time of the next tour in 2013. David Wallace also enjoyed a decent Championship for Ireland, while Sam Warburton showed promise for Wales.

Number eight: Imanol Harinordoquy (France) The athletic Basque has all the skills and, restored to his optimum position, was able to use his power to great effect to launch French attacks and make huge inroads into opposition defences. Jamie Heaslip provided further evidence of his emergence as a world-class forward while Scotland's Johnnie Beattie is another diamond ready for polishing.