This page has been archived and is no longer updated. Find out more about page archiving.
World service homepage
Blogworld - Best International Blogs homepage

Thank you to all the bloggers who've shared their insights, blogs and experiences with us at Blogworld and today on SuperPower Nation. We hope we've managed to give a taste of some of the wide range of unique and fascinating blogs in all corners of the world in all languages. As the BBC Superpower season looking at the extraordinary power of the internet draws to a close, we're giving the blog a rest...but all the posts and videos stay here for you to browse when you want. We hope to be back soon, so watch this space.

13:26 GMT
SuperPower nation has now been live for 26 minutes. People have started coming in and others have joined in from their countries via webcam. Francisco Toro , a venezuelan blogger in Canada, is on his webacam at the moment chatting to people in the room. He blogged about taking part in SuperPower nation on his blog Caracas Chronicles. 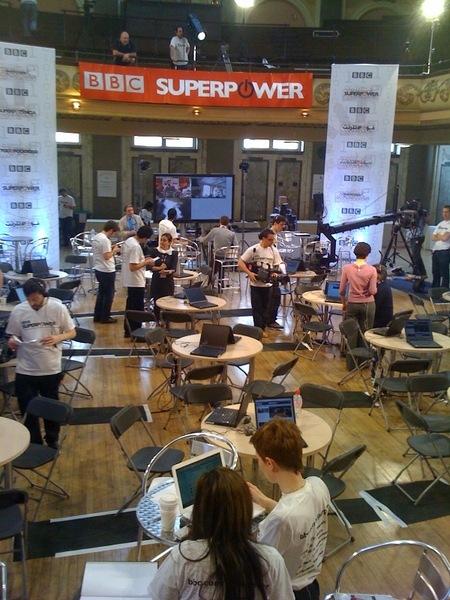 Freddy Macha is here. He'll be blogging in Swahili and English. Freddy Macha-Then and Now is his English blog and Kitoto is his Swahili one. Check them out. Alek Boyd is a Venezuelan blogger who's here at Shoreditch Town Hall, he'll be mainly tweeting the event. This is Alek's blog.

14:01 GMT
Conversations are well underway. At table 8 here in Shoreditch Town Hall a group is talking about recession, economic migration and oil production in Portugeses and Hindi. 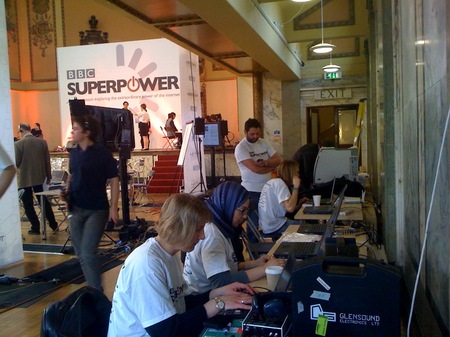 14:25 GMT
More conversations. This one at table 10 here at Shoretich Town Hall. Contributors from Indonesia and Afghanistan are talking about what level the Taliban would have in Indonesia. Our indonesian contributor thinks less than 10%. 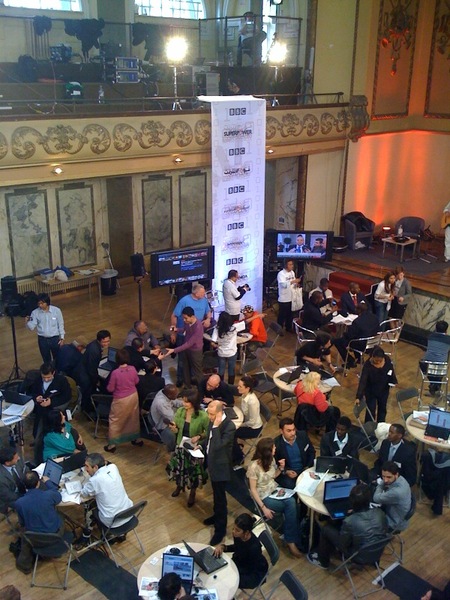 14:36 GMT
Talk of the Middle East and the broader picture there as well as freedom in Iran were the starting point of the conversation at table 18. Contributors from Japan and Iran are also discussing the Iraq elections and whether Qom or Najaf will be biggest Shiite centre in Iraq.

15:06 GMT
Nigeria and Jamaica are represented in Table 23. As well as talking about the conflict in Jos in central Nigeria, they are also talking about children becoming addicted to the internet and discussing whether this reflects lack of parental control.

16:45 GMT
So sorry for the delay we've been battling technical difficulties and have finally found out a way to resolve them. SuperPower Nation is still happening and you can follow everything that's going on live here.

16:48 GMT
A look at your suggestions on the blogosphere today:WHo's blogging SuperPower Nation? 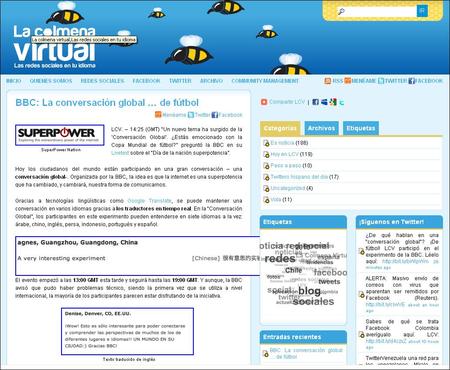 Thanks to Dunesh Wagle, Umesh , Kimberley Donoghue, sandeepa or BongMom, Fausta Wertz for getting in touch to suggest blogs. Most of these blogs have been discussing SuperPower Nation and this new global conversation experiment.

Today's round up takes to Puerto Rico, Nepal, Spain and India and the subjects vary from Nepali restaurants in Delhi to Puerto Rican governments budget and yes of course SuperPower Nation.

In Wagle Street Journal, Dinesh Wagle discusses the lack of Nepali restaurants in Delhi despite the fact that there are five hundred thousands Nepalis living and working there. Many of whom , ironically enough, work as chefs and cooks in hotels and restaurants.

Sloyka's blog,Maysanar, is in Nepali. He emailed to suggest the blog and say that he did write about SuperPower Nation. I did try Google translate to have an idea of what he's about the event but Google Translate doesn't translate for Nepali to English yet.

Kimberley Donoghue, is the editor of "La Colmena Virtual" based in Barcelona. The blog is in Spanish but with the magic of Google Translate I'm able to tell you what they said about SuperPower Nation.

Today the citizens of the world are participating in a great conversation - a global conversation. Organized by the BBC, the idea is that the Internet is a superpower that has changed and will change the way we communicate.

Now, to India and Bong Mom's food blog. Today's offering is eggplant coated in a batter of chickpea flour and deep fried, yum!

We're still on for the next hour and a half do send tell us what bloggers in your country are talking about today. E-mail us on super.power@bbc.co.uk

Blogworld is at Shoreditch Town Hall getting ready to start live blogging SuperPower Nation very shortly. The atmosphere is fantastic , the pictures below speak for themselves really. This unique event involves so many parts of the BBC: TV, Radio and Online and more than thirty language services, all to facilitate the live conversations that will take place today between 1300-1900 GMT.

I'll be blogging live all through SuperPower Nation and will be updating you about what the bloggers here at Shoreditch Town Hall and in different parts of the world are saying about the event.

If you want to take part in SuperPower Nation and tell us what you or bloggers in your country are talking about. Here's how you can get in touch; e-mail us on super.power@bbc.co.uk. 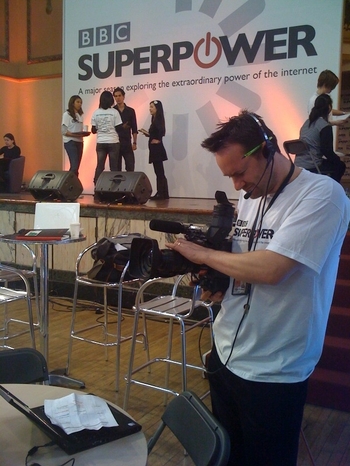 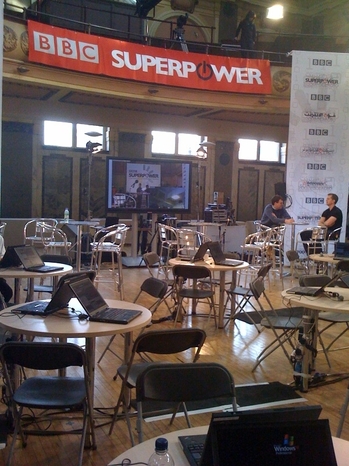 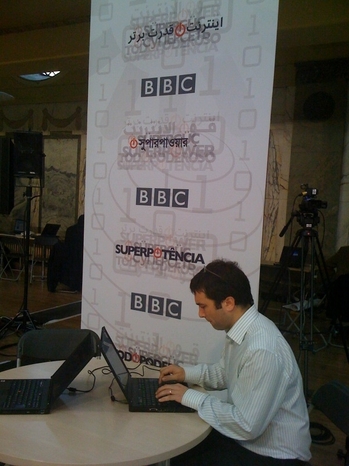 Welcome to Blogworld -- highlighting the best international blogs in multiple languages for a special BBC season about the power of the internet -- bbc.com/superpower. We'll be updating the Blogworld blog regularly with our finds and your recommendations. So if there's a blog you'd like to share please let us know. Drop us an email on super.power@bbc.co.uk, comment or tweet us @bbc_blogworld.

You can stay up to date with Blogworld - Best International Blogs via these feeds.

Eugene Volokh and a number of other law professors blog on The Volokh Conspiracy. The blog covers everything from politics and law to arts and culture. Here Eugene tells us more about how it all started and what he does...

Adrian is an Australian cabbie who drives around the streets of Sydney every night taking his passengers from one place to another and listening to their stories. At the end of his shift he gives a brief of the best...

SuperPower season ends with a major event on Thursday the 18th of March. Our colleagues at SuperPower Nation have been working very hard to bring this truly unique and global event together. The simple idea behind SuperPower Nation is to...

Thanks to Drid Williams, David Jackmanson and John Clarke for suggesting blogs and blog subjects both via e-mail and on Twitter. Drid Williams is a fan of Iditarod. It's a sled dog race that happens once a year in Alaska;...