All ends well in East End

In case anyone was wondering, I am not writing this from another space-time dimension: the world did not fold in on itself above Upton Park on Saturday, everyone present survived and even the sport of boxing came out the other side.

If us Brits aren’t moaning about the inclement summer weather, we do like to get on our high horse about a supposed moral outrage. When boxing is involved and things get a bit naughty, there aren’t horses high enough in the land.

Of course, there were underlying problems with the bout. That two young men had a punch-up at a news conference was not, in itself, one of them: believe it or not, young men have been having punch-ups for thousands of years and, I boldly predict, will be in a thousand years’ time. Probably on Mars. 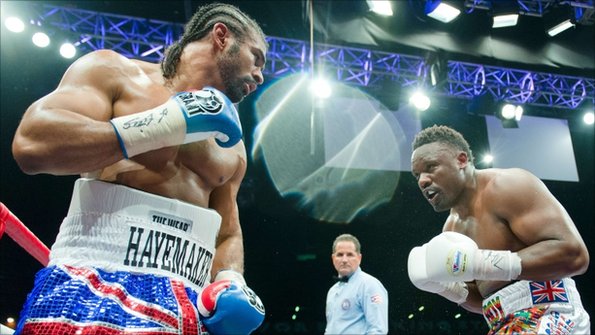 But young boxers who have punch-ups should be punished and that all parties involved were able to bypass the British Boxing Board of Control, which revoked Chisora’s licence following the brawl with Haye in Munich that led to the actual fight, was regrettable and only heightened the sense that boxing is the Wild West of sport: if you don’t possess a sheriff’s badge, then get one minted.

However, bigger crimes have been committed in boxing by far bigger names than Haye and Chisora, as I have argued on these pages before. And what went off in London’s East End on Saturday made some of the pre-fight condemnation appear nothing short of hysterical.

If the skies above West Ham were ominous, the 30,000 fans who braved the elements were treated to one of the most entertaining heavyweight bouts in recent memory: five rounds of compelling boxing, it was tremendous fun.

The smart money was on Haye being too quick and too explosive for Chisora, and so it turned out. But Chisora’s well-earned reputation for durability – remember he took Vitali Klitschko 12 rounds back in February – kept it interesting right up until the end came, with a second left in the fifth round.

Indeed, there were hints in a humdinger of a third that Haye, who had come in light and gambled it on speed, might have underestimated his rival.

Looking momentarily tired, the snap gone from his jab, there was a hint of desperation about Haye’s work as he traded with Chisora either side of the sound of the bell, with Chisora, more than two stone heavier, doing the most damage.

But Haye settled and looked to be enjoying his work in the fourth, picking his shots and making look Chisora look ponderous. A ferocious uppercut and a couple of shuddering left hooks were a sign of things to come.

Even so, the end, when it came, was surprising. Chisora, whose whiskers were tested on numerous occasions by Klitschko, a man who has finished 40 of his 44 opponents inside the distance, was knocked bandy by a sweet left-right combination from Haye. And when the courageous Chisora got up, he was knocked bandy again. Redemption, of a sort, for both men.

Chisora having regained his senses, there followed the most heartening sights and sounds of the night: the two sworn enemies kissing and making up, to warm applause from the crowd. The much-maligned Chisora even had the decency to remind Haye he owed him 20 grand, to be given to the victor’s chosen charity.

Yet, to the conspiracists, all these niceties were the final act of a convoluted secret plot: “Can’t you see you’ve been had?!” The Munich brawl, say the conspiracists, was the start of it: Adam Booth wasn’t supposed to be hit over the head with a tripod, he just hadn’t been paying attention during rehearsals.

These conspiracists don’t understand boxing: it is possible for two men who hate each other to forge a mutual respect in the furnace of the ring. Just because they kissed and made up doesn’t mean they’ll be dining together any time soon. Although, as Chisora put it, “at least we can eat in the same restaurants”.

Hatchet buried, the two men bade farewell at the crossroads. Chisora, having lost four of his last five fights, took the route to an uncertain future. But having fought valiantly against Klitschko and Haye and been robbed against European champion Robert Helenius in Finland last December, he still has options.

For Haye, the road to ultimate redemption lays open again. Made to look foolish by Wladimir Klitschko in Hamburg last July – Haye talked big, fought small, blamed defeat on his toe – victory over big brother Vitali would be sweet.

“I’d like to regain the heavyweight championship of the world and challenge Vitali for the title,” said the 31-year-old Londoner. “But I’ve got a feeling this performance [against Chisora] was too good. I’m not sure the Klitschkos are in the business of hard fights, Vitali would rather fight another chump.”

If you can cram 30,000 fans in Upton Park to see a meaningless non-title fight with the morals of a public execution, then how many people would pay to see Haye challenge Vitali for the WBC heavyweight crown? Think big. Think Wembley. I’m thinking Vitali might be. Let the nonsense begin.