Boxing fights on regardless

Contrary to what some would have us believe, David Haye and Dereck Chisora's melee in Munich was not the end of British boxing as we know it. Pre-fight trash-talk, news conference brawls, post-fight riots, none are new to the sport, as veteran journalist Colin Hart made clear at Thursday's BBC boxing summit at London's York Hall.

"I've been covering the sport for 50 years," said Hart, "and things like that have always happened." But it would be disingenuous - and complacent - for those within boxing to claim the unsavoury dust-up between Chisora and Haye was simply more of the same. For it is all about context.

When the middleweight world title fight between Britain's Alan Minter and American great Marvin Hagler at Wembley in 1980 descended into a riot, boxing writers labelled the scenes a disgrace. But those same boxing writers, rightly defensive of their sport, could point to better things. 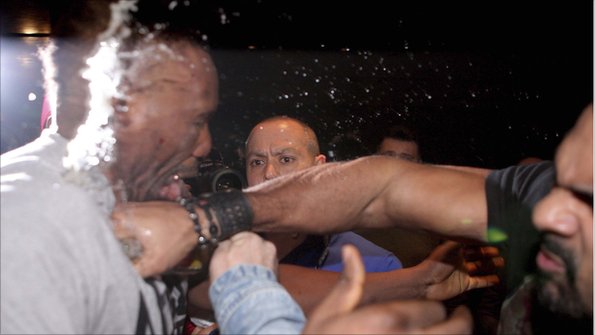 Three months before Minter-Hagler was the first fight between Sugar Ray Leonard and Robert Duran; two months later was Leonard-Duran II. Boxing was booming, slap-bang in mainstream. It could afford to make mistakes.

Moving on 32 years, boxing - rarely seen on terrestrial TV, and tucked away in newspaper 'in briefs' - is a more peripheral concern. And so, to many members of the British public, Chisora-Haye took place in a vacuum, the only 'boxing' they would have seen for months, if not years. But more on that later.

Here's what Mark Abberley, the Amateur Boxing Association of England chief executive, had to say: "There are lots of good people at grass-roots level trying to tell youngsters what kind of people they can become through our sport. The concern is two individuals' actions might undermine all that good work."

But while members of the summit panel, from Chisora's manager and promoter Frank Warren to British boxing stars Kevin Mitchell and Darren Barker - agreed the image of boxing had taken a beating, the impression I got following the nonsense in Munich was not so much that people were disgusted by boxing, but that they were laughing at it. Which is far more worrying.

With Chisora-Haye put to one side, the summit turned to the reasons why people within boxing are less able than they were to point to better things, which is where it got complicated. As one member of the audience pointed out, having listened to all sides: "Boxing sounds like a nest of vipers."

The main beef the public have with the sport is the best not fighting the best. "In football, Manchester United play Arsenal two or three times a year," said BBC boxing commentator Mike Costello. "In tennis, Rafael Nadal and Roger Federer play each other all the time. In boxing, natural matches just aren't happening."

Hart gave the example of Tyson Fury v David Price, a potential domestic classic that recently fell through after Fury chose to vacate his British heavyweight crown rather than defend against former Olympic medallist Price.

Ironically it was television, so often cited as boxing's potential saviour, that nixed it. Mark Sharman, who took the sport to Channel 5, the only terrestrial station currently showing live professional boxing, confirmed this. He explained that having invested in the "Tyson Fury story", had Fury lost his belt on Sky, where Price fights, "Channel 5 risked the story being dead".

Throw in the modern obsession with unbeaten records, the proliferation of governing bodies and individual governing bodies with more than one world champion, and you have a narrative that is more difficult to follow than Ulysses.

And then we had to talk about Floyd Mayweather v Manny Pacquiao, the only match-up any casual boxing fan wants to see and a fight that might never come off. "I'm just frustrated by the process," said Guardian boxing writer Kevin Mitchell. "To the extent that I don't care if it never happens."

Most fans will share Mitchell's frustration while wanting the fight to eventually happen. The worry is that, with the punters having waited so long, a dud bout could be as damaging as if it never happened: "Is that what five years of hype was about?" people will ask. "Is that really the best that boxing's got?"

"Until we have a situation where there is one governing body that is powerful enough we will be left with the shambles we've got now." Indeed, boxing is the exception that proves the rule: that single monumental, almost authoritarian, governing bodies in sport - Fifa, the IOC - are a necessary evil.

Warren went on to explain that another reason certain fights do not happen is because certain television executives do not want to stage them. At which point, just about everyone assembled turned their guns on the BBC.

"The BBC have to take some responsibility," said Warren, "they do not listen to the licence fee payers. Boxing has provided some of the biggest audiences in history on terrestrial TV." Fellow promoter Eddie Hearn agreed. He said: "The BBC just doesn't like the sport." Hart added: "It's about time someone at the BBC kicked a few backsides. It's all down to snobbishness."

It was left to Costello - a former amateur boxer and trainer and boxing man through and through - to defend the corporation's position. "Virtually every big fight in this country is on BBC radio," said Costello, "but television simply cannot afford the top-end fights any more, the sports budget has been slashed."

Despite its limited exposure on terrestrial TV, business would appear to be booming. British Boxing Board of Control chief Robert Smith claimed there were more shows in the UK than in the whole of Europe last year, while 3.2m tuned in to watch Fury fight Chisora on Channel 5 last July.

Which goes to show: people might tell you boxing has no place in today's society, but people today want to see two men having a row just as much as they did 100 years ago, whether in the form of boxing, MMA or any number of combat sports.

Below the Byzantine workings of professional boxing, the rude health of the amateur game is easier to divine. Boxing pundit Steve Bunce claimed there were more people boxing in Britain today than in the 1950s - which, given the explosion of boxing as a middle-class fitness pursuit, is easy to believe - while MP Charlotte Leslie, who heads up the All Party Parliamentary Group for Boxing, revealed that the sport is now in 2,000 schools, up from 20 in 2005.

I will save you the usual cliches - about improving self-esteem and self-discipline in kids, about instilling respect and channelling anger - but only because you have heard them all before and they aren't cliches at all, but truisms.

"I'd rather my kids were in the gym than out on the streets doing drugs, mugging people and stealing cars," said Kevin Mitchell, the boxer. "And another thing: when the riots were going on last summer, my gym was full."

The biggest round of applause of the evening was for James Cook, a former British and European super-middleweight champion who was awarded an MBE in 2007 for his work teaching boxing to inner-city kids. "All I ask is that when they enter the club they follow the rules and show some respect," said Cook.

So what did this summit teach us? If you knew anything about boxing beforehand, then nothing new. Give me 10 seconds and I will tell you how to make pro boxing a mainstream sport: one or two champions at each weight, transparent rankings, the best forced to fight the best. Stick it on the box and everyone will be watching, just as they did in the good old days. But, shame of shames, none of that is going to happen any time soon.

Too many vested interests, too many people pulling in different directions. Perhaps we should just be thankful boxing is still here despite it all. But, whatever you do, don't let Chisora and Haye fool you: what the summit did reinforce was that the sport of boxing still brims with an awful lot of good.
Share this page